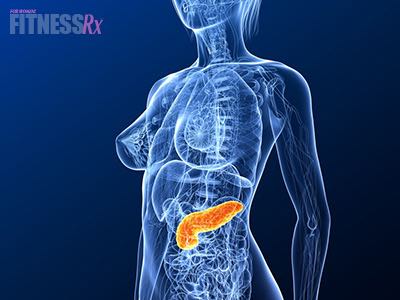 Although you might think there are only one or two hormones that control fat burning, that just isn’t true. There are about seven hormones that can have a direct effect on the many pathways that are involved in fat-burning control! Many of these hormones can be influenced by the food you eat, and the exercise you do. If you are not in control of these important hormones, the only result you will get is substantial fat gain! Read below to find out what these hormones are and how you can take advantage of them to maximize your fat burning and get you the lean body you are after!

#1 – Insulin: Secreted by the pancreas and released whenever we eat food that contains glucose, basically any carbohydrate. When it comes to building muscle, insulin is an anabolic, muscle-building hormone that is key post-workout. This “anabolic” muscle-building hormone can trigger nutrient delivery to muscles. But, once the muscles are full, glucose is then shuttled directly to fat to be stored! What’s more, this process halts fat burning. To help control insulin for muscle building and to prevent fat storage, be sure to eat your carbohydrates with a source of protein, which can reduce your insulin response and keep you lean and muscular.

#2 – Glucagon: The pancreas also secretes this peptide hormone in an effort to raise blood glucose levels. It acts directly opposite to insulin, and while insulin stores carbohydrates and fat, glucagon breaks down stored body fat and fuels fat burning. Eating too many carbohydrates will cause this hormone to stop converting stored fat into energy. If you want to maximize glucagon release, it is as easy as following a high-protein, low-carbohydrate diet.

#3 – Adiponectin: This is another important hormone that is produced by our body fat. It can crank up your muscle’s ability to use carbohydrates for energy, boost your metabolic rate, and increase the rate by which your body breaks down fat. It also has an appetite-suppressing effect! If your lean muscle is low, your adiponectin will also be low. To maximize adiponectin, you simply need to lift more weights. Shift your body composition to more muscle mass, and less body fat, and you can start to regulate this fat-burning hormone!

#4 – Leptin: This hormone is made by our fat cells and signals to the brain when we are full. The more fat you have, the more leptin will be released, which sounds great, but the problem is too much body fat leads to too much leptin! This can cause the brain to become numb to leptin’s signal. The result— you can’t stop eating and your metabolism grinds to a halt. The simplest remedy to boost leptin is to jack up your metabolism, start following a regular diet plan, and be sure to throw in the occasional cheat meal.

#5 – Ghrelin: Made and released in the stomach, ghrelin can be considered the opposite hormone to leptin. When the stomach is empty, it signals to the brain that you are hungry. If you want to lose weight you want less ghrelin so you don’t get hungry. If you want to gain muscle weight, then you want more ghrelin. The challenge is, when you are on a diet, this hunger hormone doesn’t go away, and even after dieting for months, this hormone can stay elevated! Your body actually never adapts to eating less and constantly sends the “I’m hungry” signal, which can make maintaining weight loss very hard! If you want to control this hormone, go work out! An intense exercise session can decrease ghrelin levels.

#6 – Cortisol: This catabolic muscle-wasting hormone is produced by the adrenal glands whenever we encounter stress. Whether it is from life or massive amounts of training, chronic high levels of cortisol result in higher-than-normal insulin levels, muscle loss and ugly body fat gain! Cortisol can also deplete the level of the neurotransmitter serotonin, which can have a direct impact on sleep, recovery and your appetite! If you want to control this hormone, be sure to get your eight hours of sleep every night and don’t sweat the small stuff.

#7 – Norepinephrine: The most important hormone when it comes to fat burning is norepinephrine. It is the key regulator of fat metabolism that when released from the brain directly switches on the alpha and beta-receptors on fat cells, cranking up fat mobilization and enabling fat breakdown to occur at an amplified rate. One of the most effective ways to induce norepinephrine release is to get the adrenaline pumping by working out. You can also increase norepinephrine release via supplements such as green tea and caffeine, which have been shown in research to be an effective combination.