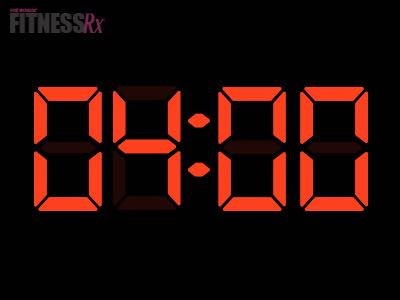 “A complete and effective cardiovascular workout in only four minutes!”

This sounds like another empty promise pitched by a late night cable-TV exercise charlatan who wants you to send him three easy payments of $49.95 for his DVD series, which he’s certain will get you in the best shape of your life.

“Not only will this four-minute workout challenge and develop your aerobic system, as it has done for Olympic athletes, but it’s also proven to result in shocking anaerobic strength gains!”

After such preposterous claims, you chuckle and change the channel, secure in your belief that four minutes certainly isn’t a long enough time to experience any meaningful results. While the general public easily falls for quick-fix gimmicks and promises of great results in virtually no time, you’ve seen the salesmen and fads come and go.

But what if I told you this four-minute workout proclaiming the dramatic results was used by Olympic athletes— and speed skaters no less? (Have you ever seen the thighs on those guys?) And what if I told you the results were verified in laboratory testing directed by a research doctor— a legitimate one? It’s true, according to two separate studies by Dr. Izumi Tabata, who worked with the Japanese speed skating team at the National Institute of Health and Nutrition in Tokyo, Japan. In these studies, eight consecutive repetitions of high-intensity exercise performed for a duration of 20 seconds, followed by 10 seconds of rest for a total of only four minutes, yielded some of the most compelling and provocative data regarding the efficacy of short duration, high-intensity exercise ever published.

Dr. Tabata wanted to analyze the effectiveness of short-duration, high-intensity exercise. His first study measured the aerobic and anaerobic development of participants in two groups. The control group performed 60 minutes of “moderate-intensity endurance training” five days per week for six weeks. The test group also exercised five days per week for six weeks, but performed “high-intensity intermittent training” consisting of just seven to eight sets of exhaustive exercise for a period of 20 seconds with 10 seconds of rest in between.

Before relaying the results, I’ll provide a primer on Tabata’s methodology. Tabata’s subjects were tested using a mechanically braked cycle ergometer— think of a spin bike. He defined as “moderate-intensity” exercise performed at a rate of 70 percent maximal oxygen uptake (VO2 max); “high-intensity” training was performed at a rate of roughly 170 percent VO2 max. Maximal oxygen uptake represents the maximum amount of oxygen an individual can utilize during exercise. The measurement is widely considered the best indicator of an athlete’s cardiovascular fitness and aerobic endurance. Tabata tested the aerobic improvement of his subjects using VO2 max readings and the anaerobic gains by measuring maximal accumulated oxygen deficit (MOAD). Maximal accumulated oxygen deficit represents the maximal amount of ATP (adenosine-5’-triphosphate, the body’s primary source of energy during brief bouts of work) an individual can produce through anaerobic metabolism during supramaximal (extreme high-intensity) exercise; MOAD has been described as “a direct quantitative expression of the anaerobic capacity.”

Tabata would further test his “protocol,” this time against another test group, which would also be working at a high-intensity level. Again conducting his research using bicycle training, Tabata contrasted the benefits of six or seven 20-second intervals of high-intensity exercise at a VO2 max of 170 percent with 10-second rest periods (same as his previous study) against the benefits of a workout consisting of four to five bouts of exercise lasting 30 seconds at an intensity of approximately 200 percent VO2 max with a two-minute rest period between bouts. To help put these figures into context, exercising at a VO2 max of 170 percent is virtually a full-out effort. It is unsustainable, highly uncomfortable and exhaustive. Working at a VO2 max of 200 percent is— well, you can imagine.

The results of this study were as dramatic as his previous research. Tabata found that across the board, the test group using his protocol experienced greater aerobic and anaerobic results than the other group and that “intermittent exercise defined by the IE1 protocol (one set of 6-7 bouts of 20-second exercise at an intensity of approximately 170 percent of the subject’s maximal oxygen uptake, with a 10-second rest between each bout) may tax both the anaerobic and aerobic energy releasing systems almost maximally.”

Take a moment to allow Tabata’s study-concluding statement to sink in. Use of the Tabata protocol “may tax both the anaerobic and aerobic energy-releasing systems almost maximally.” Tabata’s research indicates his protocol is something of a magic bullet, an exact, previously undiscovered formula for exercise programming that, when followed precisely, generates near maximum strength and cardio-conditioning gains, all in a remarkably brief period of time.

Now that you’ve seen the research, how you can incorporate Tabata protocols into your workout routines? There is good news to tell here as well, with an almost unlimited ability to enhance your training through the use of the Tabata protocol.

Tabata’s results weren’t driven by the method of exercise used (mechanically braked cycle ergometer); they were the result of the intensity (170% VO2 max) and durations (6-8 bouts of 20-second exercise followed by 10 seconds of rest) he identified. Thus, an extraordinary advantage of training with Tabata protocols becomes flexibility.

Are you looking to blast your biceps at the end of an arm workout? Try Tabata protocol dumbbell curls. Want to wipe out your quads to close a leg day? Finish off with sprints or on a stationary bike performing the Tabata protocol. Up for a major challenge? Add Tabata protocol pull-ups to your back day.

Whether you’re training arms, legs, core or cardio conditioning, finishing a workout with a round of the Tabata protocol can provide you a pump and burn you’ve rarely experienced. Be creative: jump rope, do push-ups, crunches, military presses, front squats, reverse hypers, leg presses, medicine ball throwdowns, lat pull-downs, dumbbell bench presses— almost anything you can think of, performed Tabata-style will plant an exclamation point on your workouts. This is how I recommend using the Tabata protocol: as a four-minute finisher to your current workouts. Remember, Tabata’s research suggests these four minutes, if performed to his specifications, “may tax both the anaerobic and aerobic energy releasing systems almost maximally.” That’s a strong return on your investment.

Another way to use the Tabata protocol is when you’re strapped for time or even unable to go to the gym. If you have only 15 minutes between dropping one kid off for soccer practice and picking the next up at ballet, try warming up for 10 minutes, then performing a Tabata protocol with push-ups or squat jumps or scissor kicks. This won’t replace your regular workouts, but in a brief amount of time with limited space and no equipment, you can improve both your strength and aerobic conditioning. Tabata protocols can be a lifesaver on vacations or business trips, where two-hour journeys to the gym and access to extensive equipment simply aren’t possible.

You will want to gradually work your way into Tabata condition. This programming was originally used by Olympic athletes, and there’s no shame in not being able to complete even one full round on your first try. If you attempt Tabata protocol push-ups at the end of your next chest day and complete 15 in the first 20 seconds, 13 in the next, six following that and then crash, that’s OK. You now have a baseline to build off of. The Tabata protocol, while short in duration, demands an exceptionally high work rate to perform correctly— a work rate many of us are not currently training at— and that work will pay off. When starting out, make sure you’re fully warmed up and use a lighter weight than you’d typically consider working with.

Tabata’s research almost sounds too good to be true: four minutes of exercise, which could significantly improve both your aerobic and anaerobic capacity when performed properly. If the research didn’t exist and Tabata didn’t have staunch advocates among elite athletes and serious trainers, it would be easy to dismiss his claims as empty promises. The research does exist, however; its results are impossible to ignore, and his protocol has been in use and continues to be a serious tool for athletes and trainers worldwide. Now it’s your turn to test the Tabata protocol and what might potentially be the most important four minutes of your training.