Ever wondered why after exercise you can often feel less like eating? That’s because exercise elicits a serious of positive effects on your body and your metabolism that cannot just burn calories and fat, but also improve mood and effect appetite. If you’re wondering how HIIT can help you, keep reading.

You probably are already aware that HIIT exercise protocols can do wonders for stimulating fat metabolism over other forms of exercise, due to the hormonal response that occurs. Moderate-intensity interval training (MITT) seems to evoke a much lower hormonal response versus HIIT. Moderate intensity causes a release of noradrenaline and a small amount of adrenaline, while HIIT releases large amounts of both adrenaline and noradrenaline. These two hormones can trigger fat metabolism, causing the release of stored fat to be used as fuel. In addition to increasing fat metabolism, these two hormones can also have a direct effect on hunger, and the more that gets released the more that hunger can be blunted. 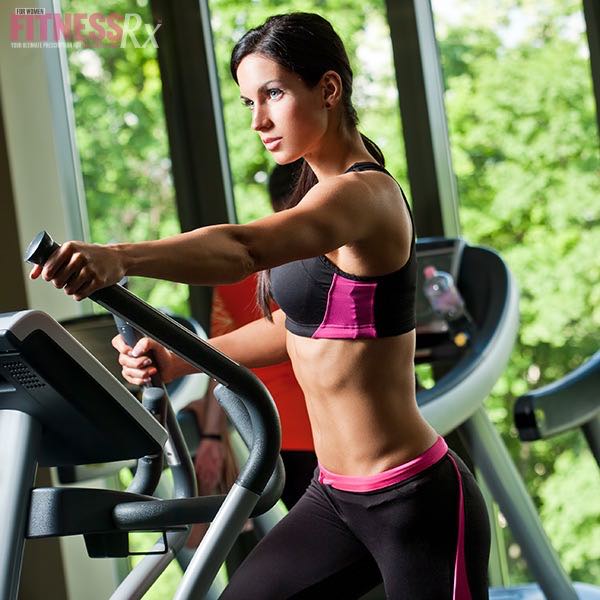 Biochemistry of HIIT and Appetite

In addition to the neurotransmitter response that can occur because of HIIT, there is evidence to suggest that other factors are at play here. The appetite-suppressing effects of HIIT are also thought to be the result of causing an increase in the release of corticotropin releasing factor or CRF— a potent anorectic peptide. This peptide when active can reduce food intake as observed in animal and human models. In rat models, hard running and swimming exercise has resulted in elevated levels of CRF, while in exercising humans it has also been shown to cause increases of indirect markers of CRF.

In another study, where exercised rats were infused with either saline or a CRF antagonist, and subjected to running, it was shown that saline-infused rats ate less food after exercise. The CRF antagonist-infused rats, on the other hand, did not; no effect on food intake or bodyweight was noticed, indicating that CRF peptide possibly plays a role in its anorectic effects.

What the Research Says About HIIT and Appetite

In one four-week study that compared HIIT to MIIT, it was shown that using a crossover design, the HIIT workouts, which consisted of alternate 30-second work at 90 percent VO2 peak and 30-second rest for 30 to 45 minutes, induced greater decreases in hunger and desire to eat versus MIIT protocol of five minutes cycling with intervals at +/- 20 percent work at 45 percent VO2 peak. The difference in desire to eat was considered significant. Interestingly, they type of exercise also influenced the type of food desired. MIIT caused an increase for high-fat non-sweet food, while it decreased after HIIT. Fat intake also decreased by 16 percent with HIIT, while it increased by 38 percent for following MIIT exercise session. Food was not controlled— an ad libitum test meal was provided after exercise, while food preference was assessed using a computer-based program using food photo samples of high and low fat foods, both sweet and non-sweet.

Other studies support highly intensive exercise for decreasing subjective feelings of hunger and inducing an anorexic-like effect, but the effects were only short-lived. It is not clear if HIIT-type of exercise results in appetite reduction due to an increase in specific peptides such as CRF, increases in noradrenaline or adrenaline, or other factors such as increasing or decreasing our hunger hormones such as leptin and ghrelin.

One thing that is certain is that regular HIIT training does increase fat oxidation to a greater extent than MIIT or LIIT, which means you can burn a whole lot more fat just by using this type of protocol regardless of whether it does or doesn’t cut your appetite!

If you’re looking to incorporate HIIT into your training and have never used it before, you might first want to practice your sprints for them to really be effective. Most HIIT protocols require a 90 percent VO2 max; this corresponds to a 90 to 95 percent maximum heart rate! To get your heart rate up to this will mean an all-out sprint, and if you’re not accustomed to running at this pace, your short rest period may not be enough for you to recover before you do it all over again. Start by using a MIIT protocol, and once your body has become more adaptive to the speed and recovery period, move it to HIIT. Aim to perform a maximum of three per week, with sufficient time off between workouts to allow for recovery.

In addition to HIIT, don’t give up on your regular cardio or weight training sessions, or a diet that follows a high-protein macronutrient ratio for that matter. Research has shown that performing a concurrent exercise program of both cardio and weights can significantly reduce the amount of total calories and macronutrients consumed. High protein diets have also been shown in numerous studies to support increases in thermogenesis or metabolism, as well as reductions in food intake, increases in satiety and reductions of hunger.