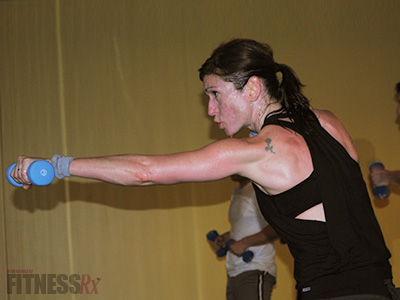 A vision of me in elementary school: I am sitting at the back of the classroom and the teacher asks a question about a math problem. A fear begins to rise inside me as she surveys the classroom, looking for someone to call on, and of course no one is offering. I look down at my desk, somehow hoping that the teacher can’t see me and I’ve become invisible, or that we will have a fire drill or something. But then I hear my name– my worst fears have come true, the world as I know it over, everyone is going to laugh at me, and nothing worse could ever happen to me in life.

OK, yes… that sounds dramatic. But that’s what it felt like back then. Because of my shyness and lack of confidence, my biggest fears as a child were embarrassment in front of my peers and participating in new, unfamiliar activities that could cause me to be flustered in front of other people. I have come out of my shell somewhat since then, but still, because of my shy ways, I’ve never been one to participate in “group” activities. I promise I’m not a hermit… what I mean is, I have just always preferred being independent and doing my own thing, like writing or getting lost in a good book. So as I got older and got into fitness, I never exactly jumped at the idea of taking group fitness classes… I mean, sweating in front of people? The potential of looking weak and pathetic if I was unable to accomplish something? And dancing in front of people… like Zumba? FORGET IT. Much safer to go to the gym, get the workout done, and get out. Or better yet fitness DVDs!

But, recently a friend of mine told me about a “Total 60” class at World Gym Coram here on Long Island, NY. I’m always looking for new ways to work out; I especially love total-body workouts because I like to save time and get things done efficiently, so I decided to give Total 60 a try. I didn’t really know what to expect, other than that it’s a total-body conditioning class. And, of course, that there would be other people there who could possibly laugh at my clumsiness… eek!

Push Yourself, But Have Fun
Before I tell you about my experience with the class, here’s a little background info. Total 60— which has the tagline “your 60-minute fitness solution”— was created by Kathy Kleaka and Allison Santana, who met in 2009 when Allison took Kathy’s Zumba class. Allison became a Zumba instructor herself, and the two soon became close friends and decided to develop the Total 60 fitness program, which they are now trying to expand to other gyms and maybe have their own studio one day.

As instructors, Kathy and Allison were very motivating; one of their main tips for anyone wanting to achieve their fitness goals is to always make sure you are challenging yourself and going to the next level. Before the class, Allison told the attendees to make sure to use five-pound weights if you had become comfortable with the three-pound weights. “It’s all about going out of your comfort zone,” Allison told me in an interview after the class. I soon realized just how important that message was, not just in fitness but in other aspects of my life.

According to Allison and Kathy, people of all fitness levels have tried the Total 60 class and beginners have seen remarkable changes in not only their weight, but also their health. And it was definitely something I noticed about this class— that it attracted people of all ages, both men and women.

Kathy and Allison also believe in making fitness something you actually enjoy to do. “You’re working hard but you are smiling the whole time,” said Kathy, about Total 60. “It’s just fun.”

Going Beyond My Comfort Zone
As I was waiting for the class to begin that day, it was becoming crowded as more and more people— of all ages— started showing up. Perhaps the regulars didn’t recognize me— or they overheard me talking to my friend— because people kept telling me to “be prepared to work hard” in this class. As the class began, we were instructed to take bands, weights and other fitness tools for use during the class. I’m starting to think to myself, “wow what did I get myself into? This place is crowded with people who know what they are doing!”

As the fast-paced dance beats began to blare over the speaker, I realized that I was definitely stepping out of my comfort zone. I knew that this was going to be like no workout I had ever experienced before, as we jumped right into plyometrics, kickboxing moves, dance fitness moves, sports drills, weights, push-ups, core strengthening, and more, all under the instruction of both Allison and Kathy. Everything moved very quickly, from one move to the next. At times, it seemed like everyone knew what they were doing while I was trying to figure out what was going on, especially with the dance moves! Eventually, though, after we would go through the moves a few times, I would start to get the hang of it.

Something interesting, though, was happening to me in this class. I quite possibly looked silly or weird as I tried to keep up… but I didn’t care and didn’t really think about it that much. I was having fun, and having a good workout. I didn’t even think about what other people might be thinking, or consider that they might be secretly laughing at my lack of dance skills. That day, Kathy and Allison were filming the class so they can present it at fitness conventions. So here I was not only participating in an unfamiliar fast-moving class where I didn’t know what I was doing… but it was also being filmed! And funny enough… I just didn’t care. What did it matter? I’m sure there were other beginners there who were trying to keep up, and even if there weren’t, everyone else once was as clueless as me when they first started. And because I was having fun, the class flew by. When it was over, I couldn’t believe I had been working out for a whole hour already.

This class made me reminisce about my younger days, when embarrassment was my worst nightmare. I realized something that I had learned over the years, but had never really admitted to myself— that worrying about things like potential embarrassment is pointless. Most people are too worried about their own actions and what they look like, that they don’t have the time to judge you or make fun of you. And even if they do… so what? I’m doing something for my health and wellness, and I am happy with that.

What I Learned
So that’s my message to you this week. For everything related to fitness and beyond— try new things including new workouts you think you’d never try, don’t worry if you look silly, and always strive to go beyond your comfort zone. Everyone had to start somewhere! I have always learned and grown the most when I try new, unfamiliar things— those things that at first terrified me and seemed impossible to complete. And even if you just try, the feeling you get after— of accomplishment and success— is just incredible.

For More
If you live in the area and are interested in trying Total 60, you can visit worldgymcoram.com. For more info on the program, you can also e-mail Kathy at Kathy@total60.com or call (631) 968-6068.