Skip to content
FitnessRX for Women > Training > Workout Tips & Advice > Working out with the Queen of Pop
Share This! 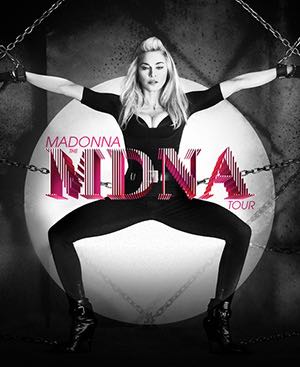 On the morning of June 19, 500 talented dancers gathered at the Broadway Dance Center in New York City for the chance of a lifetime— the opportunity to work out with Madonna and her trainer, Nicole Winhoffer, for a day. 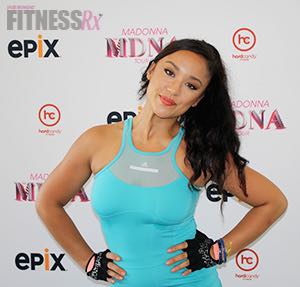 That morning of the event, I had a chance to catch up with Nicole, who has worked with Madonna for the last four years. “This event is giving viewers and fans a sneak peak inside into what we did exactly to get her ready [for the tour],” said Nicole, adding that preparing Madonna for the stage required endurance, teaching her discipline, focus and more. (For more on Madonna’s tour, check out the special, “Madonna: The MDNA Tour” on Saturday, June 22 at 8 p.m. EST on EPIX.) 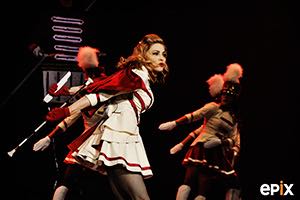 Nicole began dancing at the age of 7. At 17 she booked her first Broadway show, “42nd Street,” and she also appeared in “Wicked” and “Bombay Dreams.” After that, she joined Madonna’s Sticky and Sweet tour as a dancer and then became Madonna’s personal trainer. Nicole is also the creative director of Madonna’s program Hard Candy Fitness: Addicted to Sweat. In this role, Nicole creates workouts and programs for the seven Hard Candy Fitness gyms around the world.

Working with Madonna is “the most precious opportunity that anyone on this Earth could ever have,” Nicole said. “She has made me a better person… She requires discipline, focus, detail, solutions, and thinking outside the box and being creative. That’s what drives me to do what I do.”

• Change it up to see results. Nicole changes Madonna’s workout program every week, including the music.

• Think about what you want to achieve. “Visualizing your goals is very important.”

• Avoid dairy and refined sugar. “I don’t have dairy unless it’s like a good event and maybe there’s some dessert.”

• Nicole eats five times a day. “I like to keep it consistent but once in a while I bring in a new element.”

• Nicole does her best to choose gluten-free foods, because she believes gluten slows her down.

• Carb up your mornings. “In the morning I have my load of carbs because it will last me for all my workouts throughout the day.”