A few studies have shown that multi-joint, free-weight exercises such as barbell squats and deadlifts activate “core” muscles better than isolation core exercises. These studies have led many trainers, coaches and exercise enthusiasts to mistakenly think that it’s been scientifically demonstrated that you don’t need to do exercises that focus on your abs and obliques because squats and deadlifts do the job more effectively.

In this article, I’m first going to show you why the common claim that “heavy squats and deadlifts are all you need to train your abs and obliques,” doesn’t make scientific sense when we look at the relevant evidence, and defies common sense when we look at how barbell squats and deadlifts apply load to the torso. Then I’m going to share with you five of my top abdominal and oblique training exercises.

Core Confusion: A Closer Look at the Science

One of the two studies that are most commonly quoted as scientific “evidence” that squats and deadlifts work better for strengthening your abs and obliques is titled Systematic Review of Core Muscle Activity During Physical Fitness Exercises. And, the purpose of this article was to “systematically review the literature on the electromyographic (EMG) activity of three core muscles (lumbar multifidus, transverse abdominis, quadratus lumborum) during physical fitness exercises in healthy adults.”1 Notice that when the authors say “core muscles,” they’re not referring to the rectus abdominis and the obliques.

The major findings of this review are as follows:

It’s clear that the results of this review certainly don’t demonstrate that squats and deadlifts create more activation of the rectus abdominis and oblique musculature than exercises that focus on those core muscles. However, what these findings do tell us is: If you’re doing exercises like squats and deadlifts, you’re not neglecting the deep (local) core stabilizing muscles like the transverse abdominis and the lumbar multifidus.

The researchers of this review concluded that, “The available evidence suggests that strength and conditioning specialists should focus on implementing multi-joint free-weight exercises, rather than core-specific exercises, to adequately train the core muscles in their athletes and clients.”

Now, if you only read that conclusion, and failed to ask, “Which core muscles did the researchers of this study look at?” you can clearly see how the study has been misrepresented as demonstrating that squats and deadlifts create more abdominal activation than core-focused exercises directed at those specific core muscles.

In the other of the two studies that often gets misrepresented in the same way as the one I just discussed, which is titled Trunk muscle activity during stability ball and free weight exercises, squats and deadlifts were done with loads of approximately 50, 70, 90 and 100 percent of the subject’s 1RM. Also completed were three stability ball exercises: bird dog, hip bridge and ball back extension.2

The findings of this study were as follows:

The results of this study should be expected since the nature of exercises like barbell squats and deadlifts are extension-based, as these exercise load the body in such a way that is driving your torso forward into flexion, therefore requiring you to constantly use your back extensors in order to resist that force and maintain your spinal alignment while performing the lift.

Since you now know that exercises like squats and deadlifts do a great job of training your posterior core muscles, but not such a great job of training your anterior core muscles (e.g., abdominals and obliques), the question becomes: with all the available abdominal- and obliques-focused exercise variations out there, which moves offer the most benefit?

The following (in no particular order) are five of my top exercises for training the abdominals and obliques. 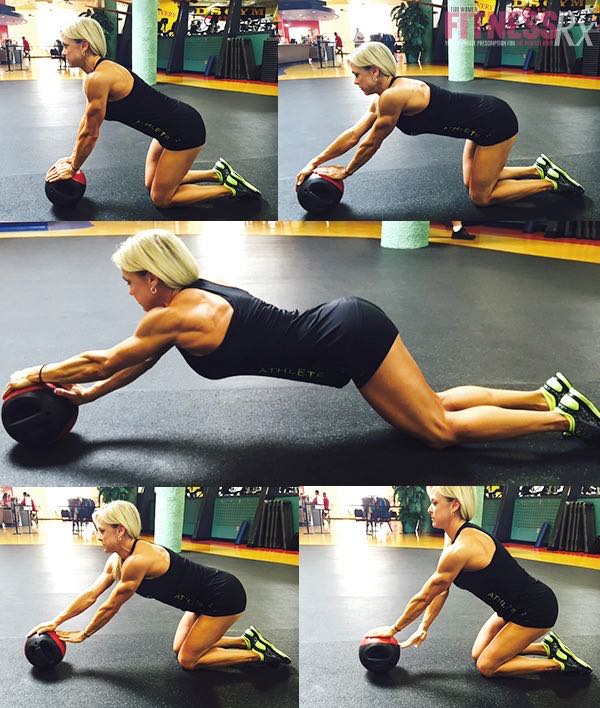 Set-up: Assume a kneeling position with your hands on the top of a rubber or sand-filled medicine ball and your elbows straight. You may also need to place a pad, pillow or folded towel under your knees for comfort.

Coaching tips:
• Keep your body in a straight line throughout, without allowing your hips or head to sag toward the floor.
• Be sure to squeeze your glutes tightly each time you’re walking your hands out into the long-lever position.
• Be sure that you only walk your arms out as far as you can without feeling discomfort in your lower back.
• If you’re using a rubber medicine ball, the kind you’ll find at most gyms, make sure to use a ball that’s fully inflated and large enough (eight-plus pounds) to fit both of your hands on top of.
• If you’re using a sand-filled ball— the heavier the ball, the harder the exercise. 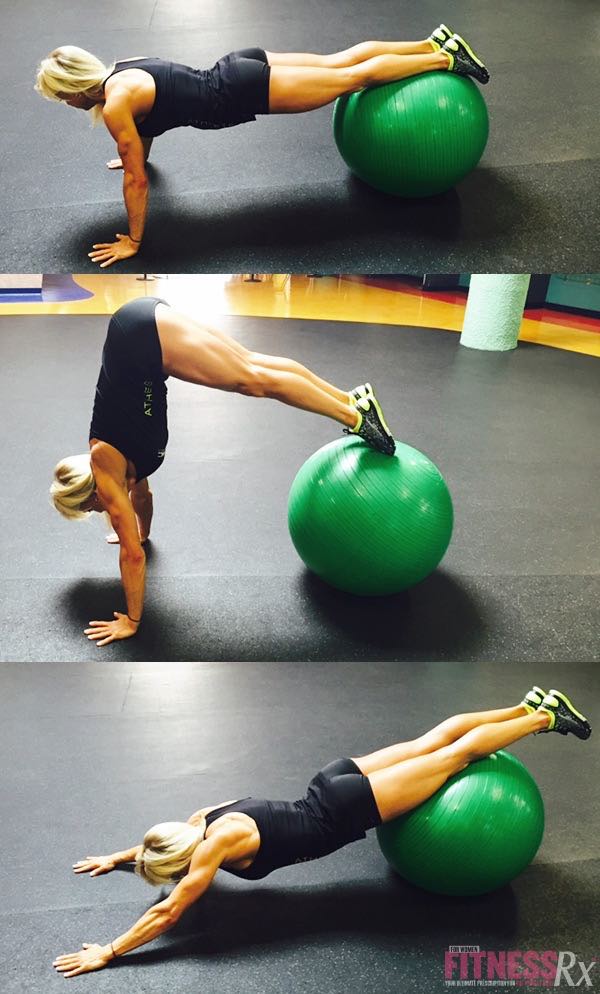 Set-up: This exercise combines the ball pike and the ball rollout into one comprehensive abdominal exercise. Hold yourself in a push-up position with your hands directly underneath your shoulders and feet on a Swiss ball that’s between 55 and 65 centimeters in size. 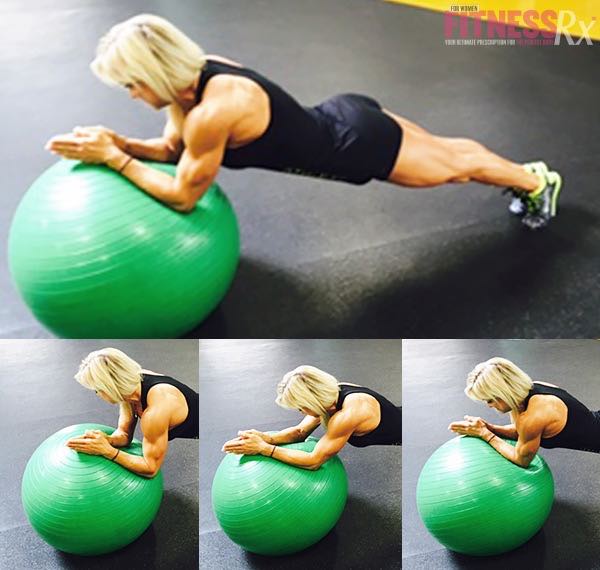 Set-up: Place both forearms on top of a fitness ball and assume a plank position with your body in a straight line and your feet shoulder-width apart. Contract your glutes and posteriorly rotate your pelvis by bringing your front hip bones toward your head and your tailbone toward your feet. In other words, if you imagine your pelvis is a bucket of water, a posterior pelvic tilt involves tipping the bucket so the water would spill out of your back, whereas an anterior pelvic tilt (the opposite of a posterior pelvic tilt) would be trying make the water spill out from the front of your body.

Action: Move your arms in small ovals. Alternate between clockwise and counterclockwise circles. without allowing your head or hips to sag toward the floor.

Coaching tips:
• Keep your body in a straight line throughout, without allowing your hips or head to sag toward the floor.
• Your arms aren’t moving in a circles as much as they are moving in an oval shape with your arm going further long ways than they do to the sides, so you don’t fall off either side of the ball.
• Be sure to squeeze your glutes tightly each time you reach your arms out.
• Be sure to reach your arms out as far as you can without feeling discomfort in your lower back. 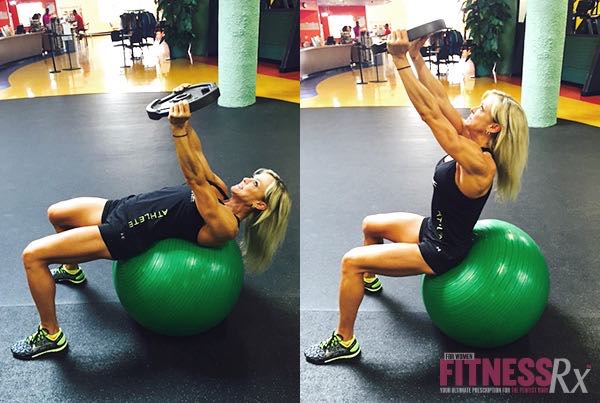 Set up: Lie down with a fitness ball in the arch of your lower back and hold a weight plate directly above your chest with your arms outstretched.

Action: Perform a crunch, reaching the weight plate toward the sky. Slowly reverse the motion, allowing your abdominal muscles to stretch over the ball.

Coaching tips:
• When performing this exercise, be sure that the ball does not roll at any point.
• Do not sit all the way up so that your torso is perpendicular to the floor, because this takes the tension off your abs.
• Be sure to avoid allowing your neck to hyperextend at the bottom position. Keep your neck in a fairly neutral position throughout. 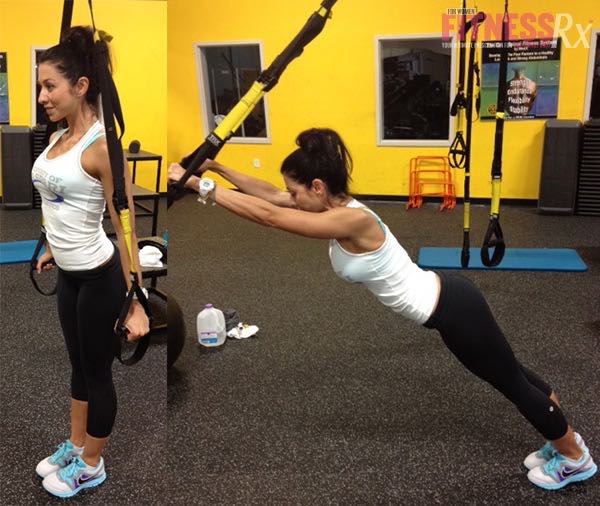 Set-up: Facing away from the anchor point of a suspension trainer, grab the handles and lean your weight forward in a push-up position with your arms at shoulder-width apart.

Action: Without bending your elbows, reach your arms above your head as if you were diving into a pool. Pull your arms back in to complete one rep.

• Do not allow your hips to sag toward the floor.
• To increase the difficulty, start the exercise from a more severe forward lean, which brings your body closer to the floor.

A special thanks to IFBB Figure Pro Gennifer Strobo for demonstrating the exercises.

To see even more great content from our other expert training and nutrition writers, check out the NEW JUNE issue available NOW. Click to get your digital copy HERE [http://www.fitnessrxwomen.com/subscribe/]