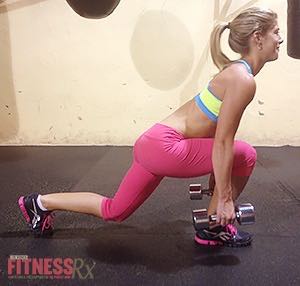 Since most of us have one leg that isn’t as strong, as well developed, or as coordinated as the other one, single-leg oriented exercises are the most optimal way to focus on each side independently in order to improve your muscle balance. The lunge exercise is a great option for adding in a lower-body training stimulus that’s unilateral (i.e., one-leg) dominant.

In this article, I’m going to show how changing the angle of your torso can drastically change the way your muscles are activated when doing lunges. I’ll also redefine “good form” on lunges by showing you a small tweak that brings about a big change because it’s more knee friendly and allows you to better build your glutes than the traditional lunge form.

In addition to showing you how to improve upon the traditional lunges variations you’re already familiar with, I’ll also show you some non-traditional lunge variations to help you spice up your training and add a new challenge to your lower-body workouts for new results!

When you talk about “toning,” “enhancing,” or “shaping” certain areas of your body, what you’re really talking about is muscle. And, when it comes to developing your muscles, there is no such thing as exercises for “toning” muscle versus exercises for “bulking.” This is one of the most patently absurd weight-training myths because it’s based on a physiological impossibility. Put simply, your muscles only have one way to develop. They shrink, grow or stay the same.

Muscle creates the shape of your body, and therefore more muscle equals more muscle tone. You can’t build a perkier, rounder or sexier anything without building muscle. And, in order to build (i.e., improve the shape of) that muscle, you need to stimulate muscle tissue, and those tiny pink dumbbells just aren’t the tool for the job.

In terms of the exercises provided in this article, along with all other weight-training exercises applications, a good rep range for improving the shape of your body (i.e., for developing muscle) is in the eight to 15 range. That means, use a weight that allows you to do no more than 15 reps.

The Lunge and Torso Position

In a 2008 study published in the Journal of Orthopaedic and Sports Physical Therapy, researchers found that performing a lunge with a forward (anterior) trunk lean increased the recruitment of the hip extensors (i.e., glutes and hamstrings). In contrast, they found that performing a forward lunge with an upright trunk posture (as in the traditional style) did not alter activation of the lower extremity musculature.1 In other words, to focus more on the glutes and hamstrings, your torso should be positioned in a more forward lean when doing lunges instead of being upright.

Now, there’s certainly nothing wrong with keeping your torso fully upright while performing lunges, which will bring in more of the quadriceps musculature. However, the average woman probably doesn’t need to perform much quad-focused exercise on a regular basis. The reason for this is that women are more quadriceps dominant than men, have weaker hamstrings, and are more prone to knee injury.

A 2007 study published in the Journal of Strength and Conditioning Research did a comparison of hamstring and quadriceps femoris muscle activity between men and women during a single-leg squat, and found that that men activate their hamstrings more effectively than women because women are quadriceps dominant.2 This is crucial because females are two to eight times more likely to sustain an ACL tear than their male counterparts.3,4 And, research investigating the potential reasons why females are more prone to ACL injury has found that this combination of increased quadriceps activation and later onset of hamstring activation in females suggests that females may experience excessive anterior tibial (shinbone) shear forces at the knee.5

In regard specifically to knee injury, The Hunt Valley Consensus Conference on ACL injuries concluded that strong quadriceps activation during eccentric contraction was considered to be a major factor in injury to the ACL.8

Additionally, strength imbalances of the hip extensors (hamstrings and glutes) have not only been linked to an increase in rates of lower extremity injury in females, but also increased instances of low back pain.9

A Better Way to Do Lunges (Especially for Women)

Now that you have learned about the previously mentioned realities, it’s obvious that emphasizing more glutes and hamstrings (and less quads) is good idea for women to improve both their form and function. This brings us full circle back to what I said in the beginning about redefining “good form” for how to perform lunges.

Put simply, instead of keeping your torso upright when doing lunges, I recommend doing them in the manner described below:

Set Up: Stand tall holding a pair of dumbbells at your sides, one in each hand with your feet hip-width apart.

Action: Step backward with your right foot, and, as you drop your body down into the lunge, angle your torso forward about 45 degrees so shoulders are over your front (left) knee with the dumbbells on each side of your (left) calf. Be sure that your back stays straight— you don’t round your back— by hinging at your hips at create the torso lean. Once your right ribs come into contact with your right thigh and your left knee lightly touches the floor, reverse the movement by coming out of the lunge and bringing your right foot forward so that you are back to your starting position. Perform the same movement on the opposite leg.

This version of the lunge, performed with the 45-degree forward torso angle, still incorporates the quadriceps, so it won’t cause them to weaken; it just hits them to a lesser extent than when your torso is upright. Doing this not only takes force out of the knee joint— making this version more knee-friendly than using an upright torso— but, as you learned previously, it transfers more force into the glutes and hamstrings. And this, as you also learned previously, is where women especially need it.

In short, leaning your torso forward at a 45-degree angle when doing reverse lunges gives you less stress on your knee joint and allows you to better target and develop your glutes and hamstrings.

Note: This forward torso position can (and should) also be applied when performing walking lunges, as the only real difference here is that you’re stepping forward instead of backward on each rep.

In addition to the form adjustment to the traditional walking and reverse lunge I just described, here are three additional variations, which are all great exercises for building stronger and sexier glutes and legs. 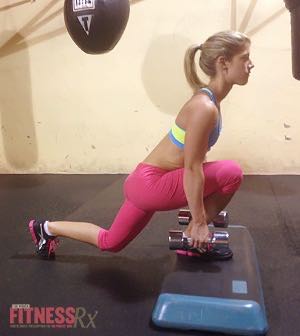 This lunge variation simply allows you to increase range of motion.

Set up: Stand on top of the flat side of an Olympic-style weight plate or on an aerobic step platform.

Action: Holding either a pair of dumbbells at each side or with a barbell on your back across your shoulder, perform a reverse lunge as in the same way as described previously by stepping off the platform and placing your back foot on the floor. Be sure to keep your back straight and hinge forward at your hips, allowing your ribs to touch the top of your front thigh. Once your back knee lightly touches the floor, reverse the motion by stepping back up to the platform. Then perform the same technique by stepping back with your other leg. 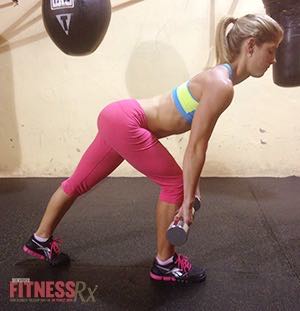 The anterior leaning lunge emphasizes much more of a torso lean, which really emphasizes the glutes and hamstrings, placing virtually no stress on the quads or on the knee joint. So, if knee issues prevent you from doing even the more knee-friendly lunge version shown previously, this anterior lunge may be a better option for you.

Set up: Stand tall with your feet hip-width apart while holding a dumbbell in each hand at your side.

Action: Step forward with one leg, keeping your front knee bent 20 degrees and your back knee straight. As your front foot hits the ground, simultaneously lean forward by hinging at your hips. Keep your back straight and allow your rear heel to come off the ground. Reverse the motion by stepping backward and returning to a standing position. Repeat on the other leg. 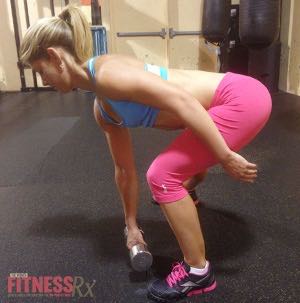 Set up: Stand tall with your feet hip-width apart while holding a dumbbell in your left hand by your side.

Action: Step out laterally with your right leg, allowing your right knee to bend 20 degrees. Simultaneously shift all your weight to your right leg as you reach your left arm in front of your right foot by hinging at your hip joint without rounding your back as you lean forward and reach across your body. Explode out of this position and return to the same starting position. Your trailing leg should be straight as you begin each lunge, and be sure to keep both feet pointed straight ahead on each rep. Perform all reps on the same side before switching hands with the dumbbell and stepping with the other leg.