Plyometric training is more than simply jumping up and down to improve vertical leap performance. This form of training, when performed correctly, can induce tremendous improvements in muscle tone and shape that, when combined with intense resistance training, can potently improve overall fitness and make you leaner, tighter and stronger.

Plyometric training can be used to train most body parts, including the upper body, where there are some fantastic plyometric movements that will make you more sculpted, toned and shapelier— not to mention the plethora of well-established plyometric jumping movements that generate tremendous lower-body functional fitness. So, while many dismiss plyometric training as solely for the athlete, the ability of plyometric training to sculpt your body and make you stronger, especially when used in conjunction with weight training, makes it a great training modality for anyone trying to get into better shape. 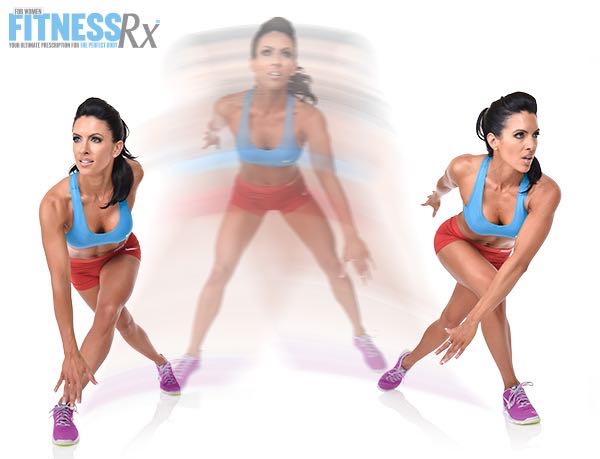 Like most training methods, plyometrics must be done correctly to be effective. With plyometric training, that means the movement must be performed very rapidly to efficiently stretch the trained muscle during the eccentric phase. In addition, the concentric contraction must instantaneously follow the eccentric phase.1

The quick stretch of the muscle tissue during the eccentric phase of plyometric training triggers certain sensors within muscle tissue known as proprioceptors that reflexively boost muscular contraction force during the concentric phase.2 One of the proprioceptors activated by rapid muscle stretching during plyometric training is the muscle spindle, which detects the quick elongation of the muscle and initiates muscular contraction to prevent further stretching and possible muscle damage.

The second proprioceptor influenced by plyometrics is the Golgi tendon organ (GTO), which typically prevents central nervous system (CNS) activation of muscular contraction, specifically when the muscle is contracting very forcefully to also prevent muscle damage. However, the quick lengthening of the muscle from plyometric training actually inhibits the GTO, which ultimately boosts CNS-activated muscular contraction during the concentric phase.2,3

Enhanced muscular contraction during the concentric phase from plyometric work will conceivably contribute to improvements in muscle tone and strength on its own. However, the most powerful training effect from plyometric movements stems from the substantial increase in CNS-activated muscular contraction, which not only improves power but should also yield greater gains in lean body mass — as enhanced power production stresses the muscle tissue. In fact, several studies show that plyometric training effectively increases muscular contraction intensity due to an increase in neural recruitment of additional muscle fibers4,5, which improves lean body mass, muscle tone and strength6,7— thus validating the notion that increased power from plyometric training can improve overall fitness and pave the way for hypertrophic gains.

Because resistance exercise increases the size and contraction force of individual muscle fibers, while plyometric training primarily increases the quantity of muscle fibers contributing to muscular contraction, combining plyometrics with weight training should provide a synergistic increase in contractile forces by making each individual muscle fiber stronger— while simultaneously increasing the activation of these larger, more powerful muscle fibers, resulting in increases in strength. In fact, several studies have confirmed that plyometric training combined with weight training produced superior gains in muscle strength and power, relative to using either training method alone.8,9

A Complement to Weight Training

A study by Kubo et al.6 showed that 12 weeks of plyometric work induced a significant increase of five percent in muscle size in the lower leg, and this effect was similar to the muscle growth stimulated by a 12-week weight-training program. A second study10 reported that combining plyometrics with resistance training generates a large increase in fast-twitch muscle fiber size of approximately 20 percent within the upper leg.

Plyometrics for a Hormonal Jump

While testosterone is a hormone that is mainly associated with men, women produce testosterone also. In fact, it’s a very important hormone for women if they want to tone their bodies. Production of the so-called “male hormone” is notably lower in women than in men, so any natural method to increase testosterone should be of interest to fit women.

Combining resistance exercise with plyometric training will do more than increase lean body mass and improve muscle tone. The more lean mass your body carries, the faster you will burn fat. Muscle acts like a furnace, burning fat 24/7. Incorporating a strength-plyometric bout into your workout program will enable you to increase your lean body mass at an expedited rate, for a slimmer, toned and shapelier figure.

Collectively, the results of these studies show that plyometric training can increase the composition of fast-twitch muscle fibers, which likely increases strength and power because of the fibers’ greater force-producing capabilities, representing an additional performance-enhancing effect associated with plyometric training.

The use of plyometric training, especially when combined with resistance work, potently enhances performance for enhanced function in the gym— ultimately promoting greater increases in lean body mass for a more toned and sculpted, leaner, shapelier body. So, forget the false notion that plyometric training is just for the athlete. It’s for any woman who wants to get in better shape, get toned and become stronger.