I have three unconventional glute exercises that I would like for you to start implementing into your weekly regimen. I’ve been performing these exercises and prescribing them to my clients with great success. The first of the exercises puts a twist on a common squat variation, the second is a unique variation of the popular glute bridge exercise and the third requires a mini band to be placed around the knees. 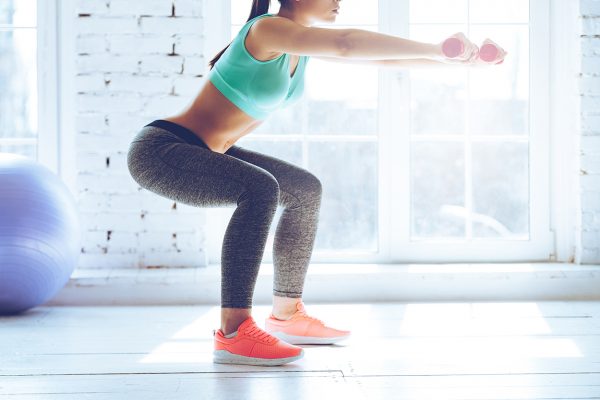 Chances are, you’ve already performed the dumbbell sumo squat. You likely found it to be fairly effective but eventually dismissed the exercise when you graduated to barbell squat variations. However, if you alter the tempo of the movement, you can receive an incredible glute workout while using a surprisingly light load.

1. Select a dumbbell that is approximately a third of the weight that you typically use for barbell squatting.

2. While holding the dumbbell in front of the body with both hands, get into a wide-base sumo squat stance.

3. Sit back and squat down while keeping your shins vertical, taking four seconds to descend in a controlled fashion; don’t allow the knees to move forward.

4. At the parallel squat position (or slightly lower), hold the bottom position for two seconds.

5. Keeping the knees out and the center of pressure on the lateral edges of the feet, rise upwards, taking one second to return back to starting position.

Just as in the case of the dumbbell sumo squat, it is likely that you’ve performed the glute bridge exercise on numerous occasions. The frog jump puts an interesting twist on the glute bridge but is markedly more effective.

1. Lie down on your back in a supine position.

2. Flare the knees out to the sides and position the bottom of your feet together near the buttocks.

3. Raise your head off the ground and tuck your chin into your chest.

4. Place your upper arms on the ground with the elbows bent at 90 degrees; make fists with the hands.

5. Bridge the hips upward until full hip extension is reached, then lower back down to starting position.

Lateral band walks have become increasingly popular over the past several years, with band placement options around the feet, the ankles, below the knees and above the knees. In the band hip hinge abduction, however, you won’t be walking— you’ll be staying in place.

1. Place a mini band just below the knees and assume a slightly wider than hip-width stance.

2. Keeping the spine arched, bend over at the hips by sitting back while keeping the shins vertical— don’t allow the knees to move forward (think of the bottom of a Romanian deadlift position, but with a slightly wider-stance width).

3. Remaining in this hip-hinged position, allow the mini band to pull the knees inward into a valgus position (medial knee displacement).

4. Now externally rotate the hips and flare the knees outward while moving onto the lateral edges of the feet.

5. Hold for a three-second count, then return to starting position.

If you’re struggling to figure out exercise form on exercises in this column, I’ve featured each of them on my Instagram page: @bretcontreras1. I hope you enjoy these unique and effective glute exercises as much as my clients and I do.