Skip to content
FitnessRX for Women > Training > legs > Tone and Shape Your Legs With Bench Jumps
Share This!

Explosive lower-body fitness is essential for success in many aspects of your exercise program, such as toning and shaping your legs. Some type of free-weight exercise such as the leg press is needed to build the base of lower-body strength. However, the power that is needed to feel like you are flying cannot be built exclusively from machines in the gym. Rather, power must be applied quickly if you want to jump higher, and that requires a mix of strength and explosive types of training. Bench jumps are an excellent way to generate muscle power, while improving your body balance and burning a lot of calories in the process.  This is an exercise that you can do when you are traveling on the road, and in that way, you can maintain and improve your lower-body power even if there is no gym in sight.

The bench jump involves many thigh and hip muscles, but we will only hit on the major ones here. The quadriceps femoris muscle group consists of four muscles that cover the anterior and lateral parts of the femur bone of the thigh. The vastus lateralis muscle covers the lateral part of the femur, the vastus medialis muscle is anchored to the medial part of the femur, and the vastus intermedius muscle is attached to the central, anterior part of the femur. The muscle fibers from the three vasti muscles come together into the tendon of the rectus femoris to form the quadriceps tendon. Unlike the other vasti muscles, the rectus femoris begins on the hip bones at the iliac crest and above the hip joint. Its fibers run straight down from the hip to the knee and attach to the patellar tendon, along with the three vastus muscles to attach to the patella.  This tendon attaches to the patella (kneecap) and continues to attach to the tibia bone of the lower leg as the patellar ligament. Together, the three vasti and the rectus femoris extend (straighten) the leg at the knee.

The gluteus maximus is the major extensor muscle of the hip joint and is active when you are jumping upward to straighten the hip. The gluteus maximus is especially active when movement between the pelvis and femur goes beyond 15 degrees of extension, so the larger hip angles of bench squats (up to 90 degrees) will strongly activate the gluteus maximus. The fibers of the gluteus medius muscle run between the ilium bone of the hip and the posterior part of the femur bone of the thigh. It abducts the femur at the hip joint by moving the femur laterally, away from the midline of the body. The gluteus medius has an important function in maintaining balance during the takeoff and landing of bench jumps.

The hamstring muscles consist of the long head of the biceps femoris, semimembranosus and semitendinosus muscles. These muscles attach to the posterior bones of hip and pelvis. They extend down the posterior side of the femur bone to attach either on the medial side of the tibia, the medial side of the superior part of the tibia bone of the leg (semitendinosus and semimembranosus), or the lateral side of the tibia bone just below the knee (biceps femoris). Together these muscles can flex the knee. However, when the foot is on the ground, the hamstrings can help to extend (straighten) the hip joint, and therefore these muscles are very activated during the upward leap in bench jumps.

This is an explosive movement and should be done by focusing on jumping up on the bench as fast as possible.

1. Stretch your quadriceps and hamstrings before beginning this exercise.

2. Select shoes that have a good rubber sole and that will not slip on the bench. It is also important that you do not jump on a surface that is slippery.

3. Stand on a flat surface and position a bench that is about 24 inches high in front of you.

4. Bend your knees slightly. Squat down until your knees are flexed to an angle of about 90 degrees. 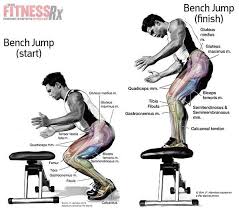 5. Explode upward as you jump as high as you can, jumping on top of the bench. Be sure to land on both feet simultaneously. You may wish to swing your arms upward as you jump, as this will help to keep your balance.

6. Once you are on the bench, jump backward off of the bench, again landing on both feet.

7. As your feet contact the ground, bend your knees to absorb the impact.

8. Flex the knees a little further, then immediately without any rest, leap upward again and back on the bench. You will actually be able to jump higher on the next rep, because your muscles and tendons will be stretched, and you will release the energy as you explode upward.

The relative degree of muscle activity differs among the quadriceps muscles during the jump. The tension in the vasti muscles diminishes as you approach the top portion of the lift (with the knees straightened). Conversely, the rectus femoris is less active at the bottom but becomes more activated when the hip and knee are being extended. Since the gluteus maximus muscle and hamstring muscles are strong extensors of the hip, they are very active during the jump upward.

This is a really intensive exercise. The muscles of your lower body will be stretched under your bodyweight as you jump off of the bench during each rep, and this means that you can get really sore thighs and gluteal muscles from this exercise. Although you may not quite be able to jump over small buildings, a few months of bench jumps will propel your leg and hip power to leap higher than you would have imagined.