All women have cellulite. What do super-sexy celebrities and some of the fittest-looking women in the world have in common? They all have cellulite – the dimply, cottage cheese-looking fat that accumulates on the butt, thighs, and abdomen. When it comes to cellulite, the fit and famous are no different from other women. No matter how often women hit the gym or how well they stick to their diet, almost all will develop some cellulite after puberty – even those with otherwise fit and hard bodies.

As women age, the thin layer of connective tissue between the fat cells becomes brittle and pulls apart. The fat pushes through the holes, causing the tiny dimples and ripples typical of cellulite. Most men don’t get cellulite because the connective tissue that supports and gives structure to the skin is thicker than in women. You probably didn’t have cellulite when you were in high school (although it is a problem among high school girls today). When you’re young, the fat underneath the skin covering the muscles and bone – the subcutaneous fat – is smooth and contoured, because it is supported and covered by a layer of connective tissue.

Hormones and genetics. Hormone changes, particularly elevated estrogen levels, trigger cellulite growth. Even though menopause doesn’t occur until about age 50, subtle changes in reproductive hormones take place beginning in your 30s. Hormone changes also occur during pregnancy and puberty that can change the structure of the connective tissue in the skin and create cellulite. Combining hormone changes during pregnancy with weight gain, less exercise, changing diet, and increased stress from changing lifestyles make the condition much worse after having a baby.

Genetics play a role in who gets cellulite. Small structural differences in two genes that control blood flow and metabolism (ACE and HIF1A genes) cause some women to get cellulite worse than others. Genetic differences help explain why cellulite is more common in some racial groups (i.e., white women) than in others (i.e., Asian women). So, one of the best ways to avoid cellulite is to choose your parents very carefully. While you can’t do much about your genetic makeup or parentage, scientists have discovered some methods for fighting cellulite.

Scientists are beginning to understand how cellulite develops, and their research has provided insights to help women fight and conquer it. Methods such as endermologie (tissue manipulation), liposuction, ultrasound, carbon dioxide therapy, cold therapy, and drugs that target local fat metabolism cause reductions in cellulite. While these methods help, they will rarely eliminate the problem. At best, they are short-term fixes.

Fighting cellulite. Exercise, diet, and weight loss remain the best methods for fighting cellulite. They reduce body fat (the source of cellulite) and tone muscles, which give the body a firm, smooth surface. You can reduce or eliminate cellulite covering your hips and thighs if you are willing to devote the time and energy it takes to do the job. You won’t get the body you want without significant lifestyle changes.

Start with 5-10 minutes of exercise and build up until you can exercise continuously for 60-90 minutes without stopping. Also, increase the intensity of exercise until you can train at 70 percent of maximum effort during your workout. You will burn at least 700 calories during each cardio workout and help tip your metabolism toward fat loss. Weight-bearing exercises such as running, power walking, treadmill running, and elliptical training are best for losing weight. 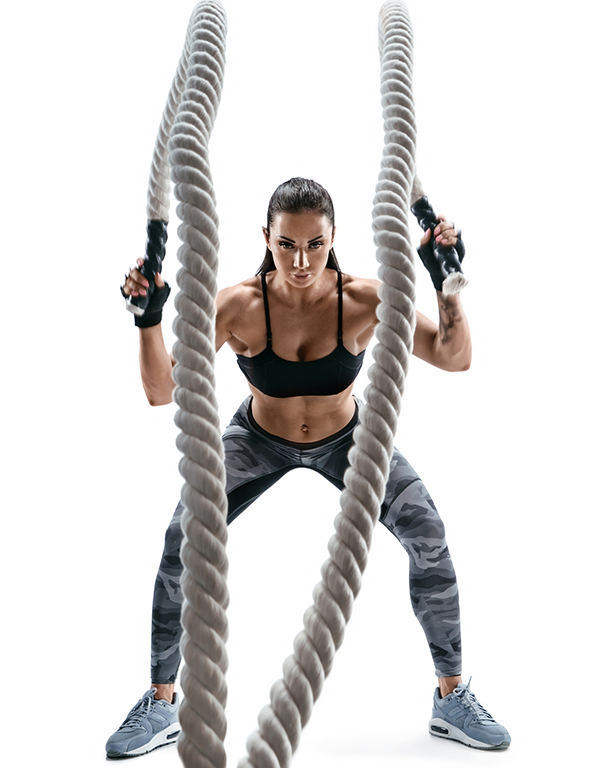 Do interval training first when combining intervals and cardio on the same day. Interval training includes intense exercise such as sprinting or power walking, interrupted by periods of rest or light exercise. Interval training will speed up your metabolism so that you continue to burn calories at a higher level 24 to 48 hours after the workout is over. Long-term weight control studies show that people who train intensely lose more weight than those who exercise slowly. Run, power walk, or exercise on a cardio machine at the gym (stair-climber, elliptical trainer, ski machine, etc.) for one minute at 90-100 percent of maximum, followed by two to three minutes of rest. Repeat 6-15 times.

Interval training is particularly effective on a running track. Stride the straightaways of the track (400-meter track at a high school or college) at 90 percent of maximum effort and walk the turns. Build up to 4-8 laps (one to two miles). If you really want to burn calories at a fast rate, build up to 6-8 400-meter intervals at 90 percent effort, with three to five minutes rest between intervals. 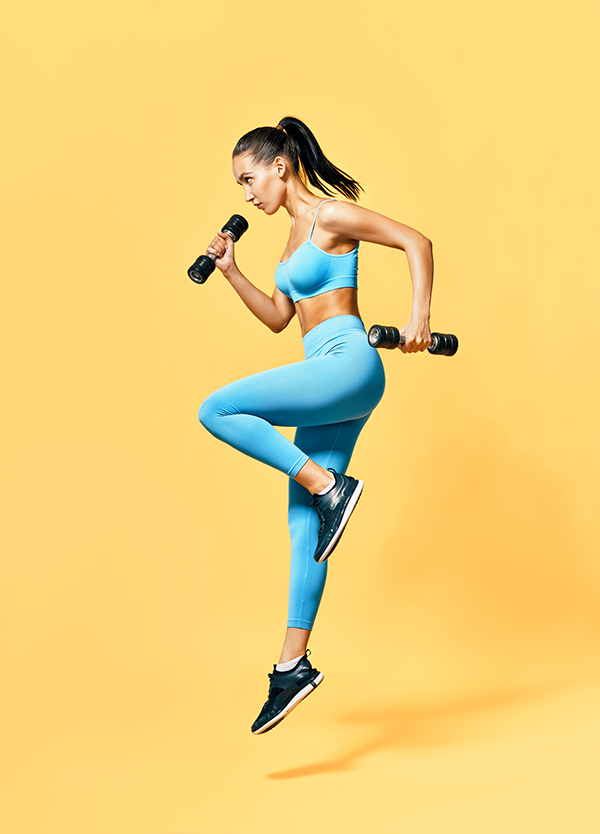 Weight training is a central part of your cellulite management program. Do 1 set of 10-12 reps for 6-10 exercises. Use a weight heavy enough to push the muscles during each exercise. Weight train after doing cardio and intervals to maximize 24-hour calorie use. Examples of effective cellulite-fighting exercises include:

• One-leg squats on a Smith machine

How Exercise and Diet Fight Cellulite

Many women are bombarded with e-mail spam that tries to sell them creams, therapies, or surgical procedures that promise to rid them of cellulite. While some of them work temporarily, none are as effective as exercise and diet. A healthy lifestyle improves metabolic control that helps prevent cellulite buildup and improves the way the body processes and stores fat.

Controlling metabolic rate in adipose tissue (fat) in the thighs and hips is critical for preventing and reducing cellulite. The nervous system sends a steady stream of impulses to the tissues that helps control metabolism and the rate you burn calories. This process works very much like the idle setting on a car – the higher the idle, the more gas the car uses. In your body, the higher the setting of your nervous system, the more calories you metabolize every day.

Fat control varies in different parts of the body. Abdominal fat, for example, turns over rapidly in part because of a higher density of hormone receptors for adrenaline – the fight or flight hormone. Fat cells in the butt and thigh are less sensitive to adrenaline, which promotes cellulite growth. Exercise can turn on hormone receptors in lower body fat stores.

Researchers from the University of Colorado found that these nervous signals are lower in women, particularly as they age and don’t exercise. You can rev up your nervous system by doing interval training – repeated bouts of high-intensity exercise interrupted by rest. The combination of intense and over-distance exercise will increase the tone of your nervous system so that you burn calories at a faster rate for the rest of the day and promote fat turnover in fat deposits prone to cellulite development.

Controlling insulin release is also important for preventing cellulite. The body releases insulin when it wants to bring sugar into the cells and make fat in the fat cells. Diets high in carbohydrates, particularly simple carbohydrates, increase insulin release, which promotes fat storage and cellulite buildup. Consuming a healthy diet, such as the Mediterranean diet that is high in complex carbs, olive oil, fruits, vegetables, lean meats, and red wine, reduces insulin levels and helps prevent cellulite. Exercise also improves insulin metabolism. Cells in physically fit women are more sensitive to insulin, so the body releases less of it and stores less fat.

Fighting cellulite with exercise involves training long enough to burn a significant calories (60 to 90 minutes per workout or accumulated exercise sessions during the day), building muscle mass in the lower body, and speeding up fat turnover in the thighs and butt. You burn 600 to more than 1,000 calories by doing vigorous aerobic exercise for 60 to 90 minutes. It’s possible to metabolize almost one-third of a pound of fat every time you run, ride a bike, or exercise on an elliptical trainer. Doing plenty of cardio exercise is a key element to fighting cellulite.

You continue to burn calories at a faster rate than normal after the exercise is over, so the true caloric cost of exercise is more than it appears. Muscle is the most metabolically active tissue in the body. Weight training helps people lose weight because it burns calories, increases muscle mass, and helps increase 24-hour energy expenditure.

Muscle not only increases metabolic rate, it also pushes against the fat near the skin and makes the fat look smoother – improving the appearance of the fat. Cellulite occurs most frequently over the anterior, lateral, and posterior thighs, so you should emphasize exercises that work these areas. Exercising these muscles intensely builds muscle mass and increases muscle temperature, which burns calories at a faster rate for the rest of the day.

Can You Beat Cellulite?

A healthy lifestyle may help you reduce or eliminate cellulite. Be realistic – your own individual biology and genetics will not always cooperate with whatever diet and training program you put into place to achieve a particular result. Live a healthy lifestyle and work hard and you can minimize the problem.

Kulick MI. Evaluation of a noninvasive, dual-wavelength laser-suction and massage device for the regional treatment of cellulite. Plast Reconstr Surg, 125: 1788-96, 2010.