Without a doubt, the glutes are the most coveted body part for women who are seeking improved shape and aesthetics. It is often said that bikini competitions are won from the rear, but having nice glutes will actually make you look better in jeans, dresses or nothing at all. That said, there is great controversy surrounding the best way to train the glutes for improved development and function. In this article, I intend to set the record straight.

Myth #1: The glutes are a fast-twitch muscle that should be trained with heavy weights alone.

Myth #2: Squats are the king of all glute exercises.

In 2006, the American Council on Exercise funded the only comprehensive resistance training experiment examining glute electromyography (EMG) activity to date. The report is titled, Glutes to the Max 5, and it showed that a variety of glute exercises highly activate the glutes. Moreover, the squat did not activate the glutes to the highest degree. I have conducted an extensive amount of EMG research on numerous lifters, and my experiments show the same findings. Squats are a great exercise, but they alone will not maximize glute development. You want to perform other exercises as well, such as hip thrusts, deadlifts and back extensions.

Myth #3: The glutes should be trained once per week for optimal development. 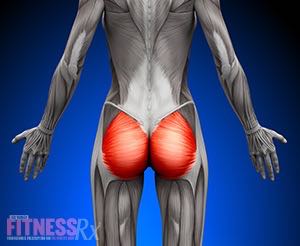 Many bodybuilders believe that each muscle group should be trained once per week for optimal development. However, these same bodybuilders contradict themselves when attempting to bring up a weak body part. For instance, if they have weak calves, they’ll train their calves several times per week. Many women have incredibly weak glutes, and their glutes therefore require much greater focus in their training. The gluteus maximus is, on average, the largest muscle in the body, and it can handle a lot of volume and frequency. My programs have always involved training the glutes multiple times per week, and you’ll be hard-pressed to find a personal trainer out there who has amassed a more impressive collection of client testimonials, before/after pictures, and glute transformation photos. I recommend training the glutes 3-4 times per week for maximum results.

Myth #4: Variety isn’t necessary in glute training; just focus on getting strong at one or two exercises.

Moreover, there are three primary mechanisms of muscular hypertrophy: mechanical tension, metabolic stress and muscle damage 9. Some exercises are better suited for producing high levels of tension, some high levels of metabolic stress and some high levels of muscle damage. In addition, it’s worth listening to what the bodybuilders and bikini competitors have to say about the matter. Bodybuilders like Kai Greene train the glutes separately and include specific targeted glute exercises, as does former Ms. Bikini Olympia Nathalia Melo. In fact, Ms. Melo states that Brazilians in general love to perform a wide variety of glute exercises 10, and they’re well known for their impressive derrieres. While it’s important to become well versed and strong at certain compound movements that target the glutes, you’ll get more bang for your buck if you also include glute isolation movements.

Myth #5: Getting sore is vital for building the glutes.

Many lifters mistakenly assume that if they fail to get sore in their glutes in the days following a training session, then the workout was unproductive and inferior. This could not be further from the truth. If you want to get incredibly sore, you could simply train the glutes infrequently, perform exercises that stretch the glutes under load such as lunges, focus on performing controlled eccentric actions and include unfamiliar movements. Each of these methods will produce soreness. However, soreness isn’t the end-all-be-all with regards to growing muscle 11. Many of my clients who have seen the best results in glute growth never got very sore in the glutes during their transformation process. There’s much more to the glute building equation, which I’ll elaborate upon below.

Getting stronger 12 is vital for developing the glutes. If you’re the same strength next year as you are right now, then your glutes probably won’t have changed shape to much degree. However, you can’t get stronger at the expense of using sound technical form. If your knees cave in dramatically during squats, your back rounds dramatically during deadlifts or your back arches dramatically during hip thrusts, then you won’t be working your glutes optimally. Moreover, you could end up hurting yourself, and if this happens, your glute building potential will come to a grinding halt. In order to ensure optimal progress, you need to make sure your form is spot on and that you always feel your glutes working during the various glute exercises. In addition, you should feel a burn in the glutes and attain a glute pump during certain exercises such as hip thrusts and back extensions, as this can enhance the glute building process 13.

Hopefully, this article has shed some light on optimal glute training strategies and dispelled some common myths and misconceptions. The best glute training programs focus on getting stronger while adhering to excellent technical form in a variety of exercises and rep ranges.