First impressions are not always correct, but they do provide lasting images of initial encounters with new acquaintances. Conveying your confidence during a first meeting, a casual conversation, a job interview or a date, is at least partly rooted in your self-perception and pride in your overall appearance. Sure, no one’s perfect (be sure those making the cover of Vogue have had their photos touched up). In real life, some touch-ups can be done effectively through weight training – and the good news is that the power to make changes to your body is largely in your hands.

Many women wish to reshape their chests. This can be done with safe and consistent weight training, either at home or at the gym. The tools in your workout offer you the opportunity to shape, or sculpt, your chest – or almost any other body part, for that matter – to enable you to exude confidence in your appearance.

If you’d like to improve the shape and appearance of your chest, consider that the upper chest plays an important role in your overall chest structure. Exercises that focus on the upper parts of the chest, such as incline dumbbell flyes, offer you the opportunity to tighten and lift your chest muscles, which of course, provide the frame for shaping your breasts. Dumbbell flyes also stress the outer and inner sections of the chest muscles, which impart greater depth to all areas of your chest. Thus, you can see that this is an all-around excellent exercise for improving the quality and fullness of your chest.

The pectoralis major muscle makes up the primary muscle of the chest. It spans across the chest like a fan, with its muscle fibers having different orientations and angles of pull in the upper regions of this muscle, as compared to the middle and lower regions. The pectoralis muscle resides on the anterior (front) chest wall, but it attaches to the humerus bone of the upper arm. Therefore, anything that you do to improve the pectoralis major must involve moving the upper arm, and by default, the shoulder (glenohumeral) joint.

The sternocostal head of the pectoralis major begins along the manubrium (the top portion of the sternum or “breastbone”), the upper six costal cartilages (cartilages at the ends of the ribs that attach to the sternum) and from the tendinous-like portion of the superior part of the external oblique muscle (a lateral muscle of the abdominal wall). 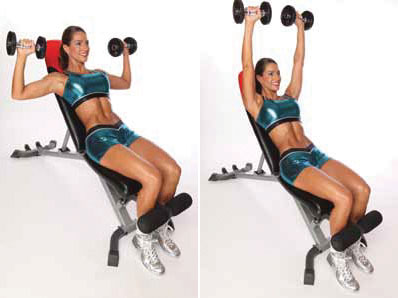 1. Choose an incline bench that’s 30-35 degrees. If the bench is too steep (e.g., 45 degrees or more), this will place an increasing emphasis on the anterior deltoid of the shoulder and this detracts from activation of the pectoralis major.

2. Select a medium-light dumbbell and pick one up in each hand. Move to the incline bench and first sit down on it. Swing the dumbbells up one at a time, and let them rest on the tops of your thighs. Now, lie down on the bench so your head and back are comfortable. Use a thrust with your thigh to lift the first dumbbell to your shoulder area such that the dumbbell rests against the side of your chest (with your elbows bent). Repeat this with the other thigh to move the second dumbbell into position near the axilla.

3. Press both dumbbells up over your chest by straightening your elbows. Both dumbbells should be pressed upward at the same time so you don’t lose your balance. At the top position, the weights should be over your clavicle or eyes and your arms should be perpendicular to the floor. You should not let the dumbbells drift toward your feet as you are pressing the dumbbells upward. Do not completely straighten and lock out your elbows at the top. Instead, slightly flex your elbows, but keep them at this angle. This will reduce any unnecessary elbow strain during the exercise.

4. Turn the dumbbells so your palms are facing each other and your knuckles on each hand are just about contacting each other. This will be the starting position for the exercise.

6. Start the dumbbells moving toward the top position over your clavicle or eyes, while you are exhaling. As the weight is moving upward in an arc, rotate your hands so the palms are facing your feet at the very top. Don’t hit one dumbbell into the other at the top, because this could cause you to lose control of the weights. The rotation of your arms (shoulders) on the way up is medial rotation of the humerus and this action increases the contraction in both heads of the pectoralis major muscle. The entire lift upward results in strong muscle activation along the inside, medial boundary of each pectoralis muscle, next to the sternum and manubrium bones.

7. The up and down arc-like movement is roughly the same as if you were to hug someone. Repeat the next repetition in the same way by lowering the dumbbells, as you laterally rotate your hands and inhale. Then, exhale as you medially rotate the dumbbells to the starting position over the upper chest. If you can do more than 20 repetitions, the resistance is likely too light, and you should choose a heavier weight for the next set. Aim to do 12-15 repetitions on most sets after your warm-ups. However, make sure your exercise form is perfect to avoid shoulder or elbow injuries.

Start with light weights until you have the feel of the exercise, because it is very important to maintain control and balance of the dumbbells at all times. Do not rotate your arms quickly during either the lateral or medial rotation, but keep the movement fluid from start to finish. This will maximize the muscle’s activation while minimizing the risk of potential injuries.

You will almost immediately feel the effects of the incline dumbbell flyes on your chest, and you will soon see the results, as you take possession of an outstanding new chest shape, complete with contours that you might not have thought possible. These changes are yours for the taking. With the new contours, you’ll be well on your way to higher levels of confidence, because you control your shape.