Skip to content
FitnessRX for Women > Training > Workout Tips & Advice > Resistance Training or Cardio: Which Should You Do First?
Share This!

There’s been an ongoing debate as to whether it’s better to do cardio before resistance training in the same workout session, or to do resistance training before cardio if you’re looking to build a lean and muscular physique. This article will tell you everything you need to know (and nothing you don’t) about how different sequences of concurrent training (i.e., resistance + cardio in the same workout) affect cardiorespiratory and muscular adaptations, and also settle the debate as to which sequence is best to use for the goal of maximizing physique development. 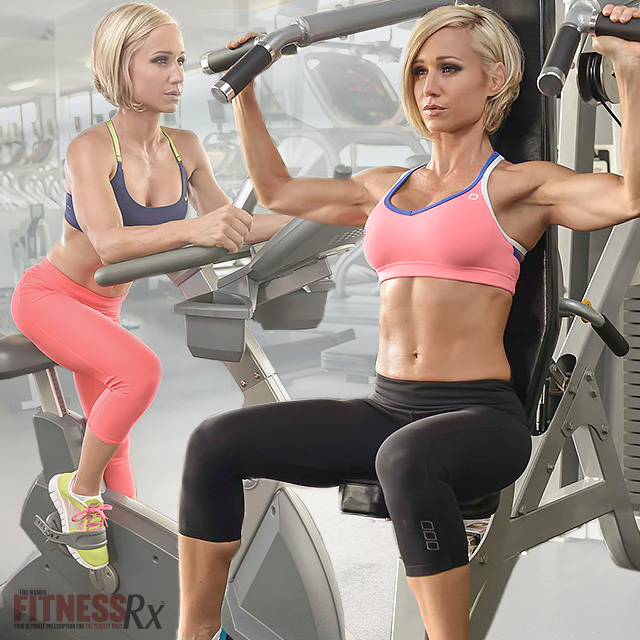 A study published in the British Journal of Sports Medicine found that although both orders of training produced significant improvements in VO2 max— which is the highest rate of oxygen consumption attainable during maximal or exhaustive exercise— the improvement was greater in the group that did the cardio training first, as opposed to the group that did resistance training first.

A study in the Journal of Strength and Conditioning Research found that the aerobic-first sequence was more effective in increasing excess post-exercise oxygen consumption(EPOC, informally called “the afterburn”), which is a measurably increased rate of oxygen intake following a bout of exercise that’s associated with an elevation in metabolism.

A study published in the European Journal of Applied Physiology demonstrated that fat oxidation and calorie burning were increased during the aerobic exercise component when it was done after resistance exercise. This increased metabolic effect was even more pronounced when the resistance exercise that preceded it was performed at a higher intensity. This is important to note because several studies have shown that performing cardio first in the workout can compromise the performance of subsequent resistance training exercises due to residual fatigue, therefore reducing the tension developed during the strength training portion of the sessions, which interferes with the strength and muscle gains.

Also, a study published in Medicine & Science in Sports & Exercise also found that the resistance exercise first sequence seems to increase the metabolic effects of the subsequent aerobic session.

Resistance Before Cardio for Building Your Best Body

Another reason it’s smartest to do resistance training first in the workout for the goal of maximizing physique development, is because muscle is metabolically active tissue, as fat is sent into the muscle to be burned. This is why strength training first, which gives you a better ability to build and maintain muscle, is critical for fat loss.

In other words, muscle is the physical location in your body where stored body fat is burned (i.e., used as energy). More muscle requires more energy, so the more muscle you have, the more calories and fat you’ll burn over a 24-hour period of time, even while you sleep!

Put simply, humans are just like cars. If you put a bigger motor in your car (i.e., add muscle mass), you’ll burn more fuel (i.e., calories) while driving (i.e., doing activities) than you did before. You want to be opposite of your car in that you want to become fuel inefficient, because the more fuel you can burn to perform a given activity, the better!

Women and Weight Training: You WON’T Get “Bulky”

Many women seem to get uncomfortable with training to gain muscle because they’re under the impression that they’ll get “bulky.” This is just plain silly, since women have significantly less testosterone than men.

When you talk about “shaping” certain areas of your body, what you’re really talking about is muscle. Put simply, muscle creates the shape of your body, and therefore more muscle equals more muscle tone. You can’t build a perkier, rounder or sexier anything without building muscle. And, being “toned” just means that you are lean enough to show off that shape, which comes from fat loss, which, as you’ve just learned, muscle plays a most important role in.

The Strength Before Cardio Workout Structure

The strength-training portion of your workouts should alternate sets and rep ranges. By alternating set/rep schemes, it ensures you hit your muscles in a different manner, which has been shown in research to be a more effective method of improving muscle than using the same old rep every workout. Plus, changing the sets and reps keeps your workouts more interesting and varied.

Each time you do your resistance-training portion of the workout (before doing cardio), alternate each workout between the following set/rep schemes for each exercise:

Cardio Workout 2: 10-15 minutes go as hard as you can,* or use intervals where you alternate intense bursts of work with medium-intensity active recovery periods.

*If you’re running on treadmill or on a bike, go as far as you can (rack up the most miles) in the time frame. Try to beat your previous time each workout.

Putting Your Workouts Together

On the workout days where you use the higher set range (e.g., 4-5 sets of 6-8 reps), you’re weight training will take longer, so you’ll follow it by performing the short duration/high-intensity training (e.g., 10-15 minutes. Go as hard as you can or do intervals).

On the workout days you use the lower set range, you’re weight training will take less time, so you’ll follow it by performing the longer duration/steady-state training.