Chest training will help to lift and define your chest, resulting in a fuller, shapelier appearance.

Q: My chest is beginning to sag and I want to firm it up, but I’m afraid to train the chest because I’ve heard it reduces breast size. I’m not very big up top to start with and don’t want to lose what I have. What should I do?

A: The theory that chest training will make your breasts smaller is one of the biggest myths in women’s fitness. In order to appreciate why, it’s necessary to understand how fat is synthesized. When calories are consumed in excess, your body converts the surplus nutrients into fat-based compounds called triglycerides, which are then stored in cells called adipocytes. Adipocytes are pliable storehouses that either shrink or expand to accommodate fatty deposits. They are present in virtually every part of the body. There’s a direct correlation between the size of adipocytes and obesity: the larger your adipocytes, the fatter you appear. When you exercise, triglycerides are broken back down into fatty acids, which are then shuttled via the blood to be used in target tissues for energy. The body can’t just draw from fat cells in the immediate vicinity. They first must travel through the circulatory system. The process of mobilizing fatty acids and transporting them through the circulatory system, however, is a time-consuming event, taking far too long to meet the immediate demands of a specific working muscle. Therefore, it’s just as efficient for your body to utilize fat from one area as it is another. In other words, the proximity of fat cells to a working muscle is completely irrelevant from an energy standpoint. Since the body can’t preferentially use fat from a particular area, it simply draws from adipocytes in all regions of the body including the face, trunk and extremities during any exercise. So while it’s true the breasts are largely a fatty-based tissue, they won’t lose size from performing chest exercises any more than they would by performing squats, rows or curls. 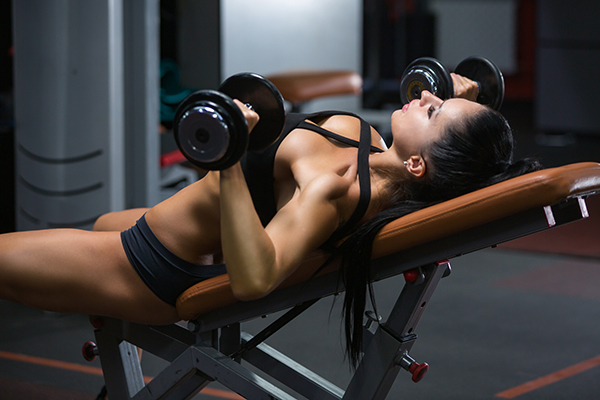 So as far as your concerns about chest training, rest easy. It won’t spot reduce breast size. On the contrary, it will help to lift and define your chest, resulting in a fuller, shapelier appearance. Realize that the breasts are supported by a vast network of muscles and connective tissue that responds well to targeted exercise. Strengthening these soft tissue structures will serve to counter the effects of gravity, preventing the inevitable sag that occurs with the passage time. Moreover, it can help create the illusion of a bigger chest – making it appear as though you have more than you actually do. By rounding out the upper pectoral region, you fill out your bustline; by adding to the middle aspect, you enhance the contour of the chest; and by developing the inner portion, you create a line down the center of your chest, suggesting increased cleavage.

For optimum results, it’s important to adhere to a well-balanced chest-training routine. By utilizing different movements and training at a variety of angles, you can target various parts of the chest to achieve complete development. Because the fibers of the pectoral muscles are arranged in a sunburst appearance, you can alter the stress to different parts of the muscle through your choice of exercises. Specifically, incline movements target the upper fibers (clavicular head), flat movements target the middle fibers (sternal head) and decline movements target the lower portion of the sternal head. To stimulate a maximum amount of fibers, make sure to use a combination of pressing movements and flyes. If possible, alternate between modalities, using a combination of free weights, machines and cable apparatus. This will help to keep the muscles sufficiently “confused,” preventing adaptation and thus a plateau in development. Finally, vary the number of reps depending on your goals, employing a moderate rep scheme (eight to 10 per set) for strength/hypertrophy and a higher rep scheme (15 to 20 per set) for endurance.