Skip to content
FitnessRX for Women > Training > Butt Exercises > Get a Better Booty and Sculpt Your Butt
Share This!

Sculpt a nice butt with wide-stance squats! This exercise is the best and fastest way to build sexy, shapely lower body muscles that will turn heads. The wide stance activates your booty muscles better than narrow or medium-width stances.

Personal trainers and strength coaches often tell women that a shoulder-width squat stance is optimal for targeting the glutes and quads. This advice is based more on traditional practice and urban legend than on scientific fact. A shoulder-width stance makes it more difficult to use the hips during the squat. Consequently, you rock forward on your toes and take much of the load on the back and quads, which can cause pain in the knees, back and neck. Increasing the stance width enhances the load on the large gluteal muscles and allows you to maintain a neutral spine during the exercise.

A sophisticated, scientific study was done by Antonio Paoli and colleagues from the University of Padova in Italy, using a technique called electromyography. It determined that wide-stance squatting activated the gluteus maximus muscles better than more narrow stances. They measured muscle activation in eight thigh and hip muscles during a narrow stance (feet placed at hip width), moderately wide stance (150 percent hip width) and wide stance (200 percent hip width). With the exception of greater gluteus maximus activation during a wide stance, stance width had no effect on muscle activation levels in the thighs or hips. The wider stance loaded the glute muscles without sacrificing muscle overload in other leg and hip muscles.

The gluteus maximus muscle is the strongest in the body. It is central to a curvy, sensuous body and absolutely essential to powerful movements such as jumping and sprinting. This study showed that wide-stance squats are best for activating all the muscles in the thighs and hips. This technique will also protect your spine and knees when you squat and develop balanced muscle strength that will prevent crippling knee injuries that are so prevalent in athletic women. 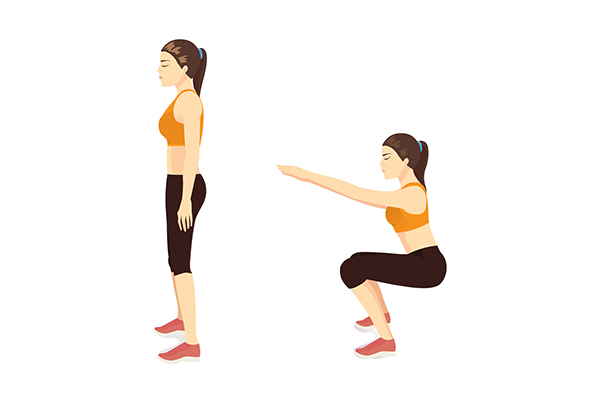 Shapely glutes are critical for functional fitness – the capacity to move your body well during normal activities. Strong glute muscles promote powerful movements on the tennis court, ski slopes or hiking trail. They take stress off fragile spinal muscles and knee joints, so you are less likely to get back and knee pain. They make it easy to carry bags of groceries up stairs or lug a heavy backpack to school. Strong, fit lower body muscles give you form and function so that you look fit and move effortlessly and fluidly.

Most women overuse their thigh muscles (quadriceps) and underuse their posterior muscles (i.e., gluteals and hamstrings) when doing lower body exercises such as squats or playing basketball, volleyball or soccer. This puts excessive stress on the knees and low back muscles. During movements such as jumping and cutting, many people bend at the back instead of at the hips. Learning to use the hips properly during lower body exercises such as squats is the key to building injury-free lower body muscle strength and power.

Women with weak and inactive glutes place more stress on the spine because they use back muscles rather than hip muscles to generate power during sitting, twisting, walking and throwing. Poor control of the glutes during walking and running reduces stability in the lower spine (i.e., sacroiliac joint and lumbar vertebrae), which increases the risk of back pain. Building and learning to use the glute muscles creates more powerful movements and prevents back injuries. Widening the stance during the squat makes it easier to load and build the glutes without overloading fragile back muscles.

Experts link weak glutes in women with an increased risk of anterior cruciate ligament (ACL) injuries – one of four large ligaments that provide stability in the knee joint. The ACL prevents excessive forward movement of the shinbone (tibia) across the thighbone (femur) and limits knee rotation. Injury to the ACL causes instability in the knee and often results in arthritis years later. Women have six times more ACL injuries than men. They also have relatively weak glute muscles compared to men and use the thigh muscles (quadriceps) more when jumping, changing directions rapidly (cutting) and squatting. Reduced use of the glutes increases stress on the knees, which can injure the ACL. Use proper squatting technique to protect your knees and build a better booty at the same time. 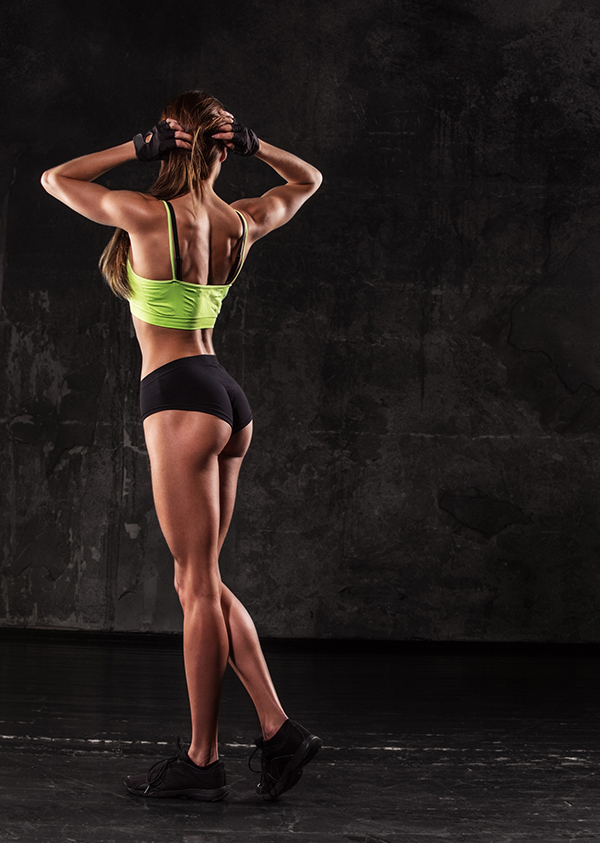 Do unweighted squats without a barbell when learning correct squatting technique. Stand with your feet placed more than shoulder-width apart, toes pointed out slightly, hands on hips, head neutral and back straight. Center your weight slightly behind the arches of your feet. Squat down, keeping your weight centered over your arches and actively flexing (bending) the hips until your legs break parallel. During the movement, keep your back straight, shoulders back, chest out, and let your thighs part to the side so that you are “squatting between your legs.” Try to push outward with the outside of your feet as though you are “spreading the floor with your feet.” Push back up to the starting position, maximizing the use of the rear hip and thigh muscles, maintaining a neutral spine and head. Do not progress to weighted squats until you can do this exercise without bending your spine (i.e., maintain a neutral spine until your thighs reach parallel).

Use a barbell when you can do a parallel squat properly. Take the bar from a rack and carry it on the fleshy part of your back. A low bar carry (bar resting below the bone on top of shoulder blades) works best for a wide-stance squat. Practice with an unloaded bar until you can do the exercise comfortably, while maintaining good posture. Add weight gradually. Wide-stance squats, when done correctly, build fit, strong lower body muscles that will protect you from serious knee and back injuries.

Paoli, A, Marcolin, G, and Petrone, N. The effect of stance width on the electromyographical activity of eight superficial thigh muscles during back squat with different bar loads. J Strength Cond Res, 23: 246-250, 2009