Skip to content
FitnessRX for Women > Training > Glute training > Firm Your Butt and Tighten Your Glutes
Share This!

Sagging buttocks do not do much to enhance the lower body, but firm, tight and toned gluteals can give your lower body a renewed attention-grabbing sparkle. Firming this region will make your new clothes fit their best, and it will allow you to get back into those tight jeans that used to grip your hips with saran-wrap tightness.

Why is the buttock region so problematic? For openers, it is a great place to store extra calories (fat) and for many, this is easier to do in the winter. To firm the buttocks, you need direct activation of the gluteal muscle group. The low pulley hip extension is superb because this exercise tones the entire buttock region and the posterior thigh. If you combine this exercise with a good diet and cardio, your gluteals will be completely transformed.

The gluteal muscles provide not only important hip shape, but they are a major source of lower-body power. The low pulley hip extension activates the gluteus maximus, which as the major muscle, is the largest and thickest muscle of all the hip muscles. It reaches from the bones of the hip, and the sacrum and along the lumbar area of the lower back and its long fibers extend to the posterior part of the femur (thigh bone).

The gluteus maximus has a second attachment on the iliotibial band of the facia lata, which is a tough band of connective tissue that runs from the hip down the lateral side of the thigh to the knee. The gluteus maximus is the most important hip (thigh) extensor. It extends the femur bone of the thigh at the hip (pushes the thigh posteriorly). The gluteus maximus is especially active when movement between the pelvis and femur goes beyond 15 degrees of extension. It is rather inactive in slow walking, but it is used strongly when powerful hip extensions are required (e.g., sprinting, squatting, climbing stairs).

The upper parts of the hamstrings also contribute to a firm buttock, and they are also active by low pulley hip extensions. The hamstring muscles include the long head of the biceps femoris, semimembranosus and semitendinosus muscles. The long head of the biceps femoris connects to the ischial tuberosity, a bony part of your posterior hip (you sit on the ischial tuberosity when you are in a chair). The biceps femoris muscle connects to a tendon that runs across the lateral side of the knee joint to attach to the fibula bone (and some ligaments). The fibers of the semitendinosus muscle attach to the ischial tuberosity, and then anchor to a tendon that attaches to the medial side of the superior part of the tibial bone of the leg. The semimembranosus muscle begins on the ischial tuberosity and attaches to the posterior part of the medial condyle of the tibia just below the knee joint. The hamstring group helps to extend the thigh at the hip joint and this is the primary action involved in the low pulley leg extension.

2. Place your feet about six inches apart and hold on to an upright post, or handles if they are installed on the pulley station.

3. Take a step backward with both feet. One leg will be the anchor leg. Bend the knee of the other leg just slightly and lock the knee in this position. This leg will be exercised first.

4. Keep your torso vertical while you extend the leg backward (posteriorly) away from the pulley station. Lift the leg as far backward as you can, then hold this position for a count of two.

5. Slowly (over approximately three seconds) control the leg as it moves forward past the starting position in front of your body. Move the thigh forward so it is at least 15 degrees above a position that is parallel to the floor. This forward position will stretch the gluteus maximus muscle and give it a greater contraction on the next contraction backward.

6. Repeat the movement by forcefully pushing the leg posteriorly in two seconds. Continue until the set is done on one leg, and then switch to the other leg. 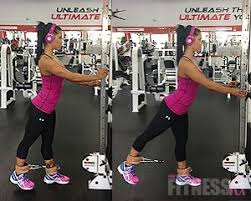 To tone, firm and reduce the size of your buttocks, you should select a medium weight that you can do for 15 reps on each leg. Work up to 20 extensions on each leg before increasing the weight on the pulley station. You can work up to three sets on each leg.

Dieting properly and adding sufficient cardio will help to mobilize the adipose tissue that covers the gluteals. Hip extensions will do the rest. They will help to transform average or soft buttocks to gorgeous slimmer, firmer and shapelier gluteals. This is a powerfully effective exercise, so you should be prepared for some well-deserved gazes when you are in your new tight jeans.