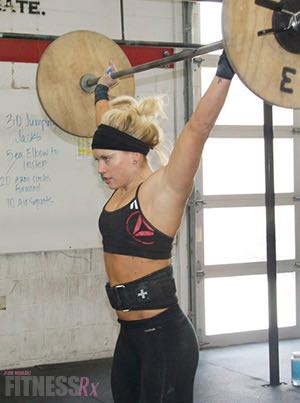 CrossFit Games competitor Libby DiBiase, 25, was a track athlete in high school and college, so she’s always been serious about fitness. But she credits CrossFit— which includes aerobic exercise, gymnastics, weightlifting and whole-body exercises— with helping her get into the best shape of her life.

This week we caught up with Libby— who appeared in a CrossFit feature in the August 2012 issue of FitnessRx for Women— as she prepares for this year’s CrossFit Games.

In last year’s CrossFit Games, Libby made it to the North Central Regionals, where she took 9th. Only the top three from each region move on to the next level, but she said she was happy to finish in the top 10. However this year, Libby is competing with her team, CrossFit Omaha, and they have their sights set on making it to the World Games.

This year’s CrossFit Games Open just ended— this five-week-long period is the first stage of the Games, when athletes must complete a new workout released each week and submit their scores online. “Going into it, I told myself I was only going to do each workout once so it didn’t interfere with my training,” Libby said. “Our team ended up 6th, so we are sitting in a good spot for Regionals coming up the end of May.”

But the Games and training are not the only things on Libby’s plate. She’s also taking care of her son Cruz, 3, and finishing her last 15 credits for college. Luckily as her son is getting a littler older, it’s getting easier for Libby to take him to the gym when she trains. “He comes with me quite a bit to the gym when I have to work out at night,” she said. “He’s so funny, he just watches the classes do their workouts and then he tries to do all the movements, too. Someone gave him his own wall ball; he thinks it’s so cool.”

This year, Libby is focusing more on getting stronger at Olympic lifts. “Also working a lot on grip strength and little details on all movements,” she said. “I’ve come to learn [that] knowing technique and putting emphasis on it can help you progress a lot quicker.”

In addition, Libby and her team, CrossFit Omaha, hope to make it to the top three at Regionals and go to the World Games. “We have a lot of depth and raw talent between all of us, so we just need to train hard, have fun, eat right, and take care of ourselves!”

Currently, Libby and her team are working out three days on and one day off. “But one day we will have a heavy Olympic lift followed by a met-con [metabolic/cardiovascular conditioning] and the other days might be one or two workouts,” said Libby. “We might amp up the volume a little bit to mock competition. But we don’t want to get burned out too early.”

Supplements that keep Libby on track include Gaspari Nutriton’s Isofusion Protein post-workout, Aminolast, SuperDrive, as well as fish oil and magnesium. But when it comes to dieting for the games, Libby doesn’t follow a particular plan. “I just don’t eat any dairy, and hardly any grain. This just works well for me. I eat a lot of fat (coconut oil, avocados, almonds, etc.) meat, veggies, and a little fruit. That’s all.”

Getting into CrossFit and the Games 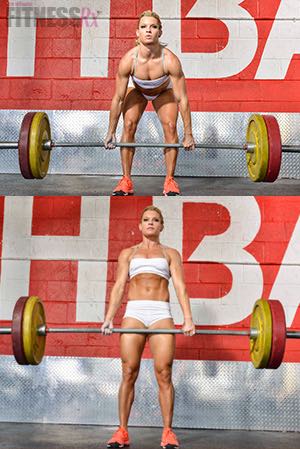 For those aspiring to compete in the Games, Libby says first and foremost it’s about having fun, and having the motivation to go the gym every day. “Every year I feel like competition gets harder and harder, so you need to stay on top of your game! It’s also really beneficial to compete in the different CrossFit competitions they have going on all year. It really helps you get used to the experience.”

CrossFit is tough and takes dedication. But for Libby, it’s all worth it. “I enjoy it because it’s different, intense, and most importantly it actually works.”

• If you want to scale this workout down, you can reduce the reps (a “Dirty Thirty” is 30 reps for each exercise, and a “Test Drive 25” is 25 reps).
• You can do regular jump roping instead of Double Unders
• Knees to Elbows can be scaled down by lifting just one leg as high as possible instead of both

Knees to Elbows: Start by hanging from a bar, with arms and shoulders glued to your ears. Pull your thighs to your chest, and your heels to your butt.

Wall Balls: This involves throwing a medicine ball against the wall, at a point about 8 or 9 feet above the floor. Start by standing 16-24 inches away from the wall. Keeping the ball at chin level, squat, and then toss the ball at the 8- or 9-foot mark on the wall. From Libby: “Your feet should be about shoulder-width apart, you need to always stay on your heels and it should always be one fluid motion. When you catch it you’re going down in the squat and back up.”

Double Unders: While jumping rope, the rope makes two passes per jump instead of one.

Get in Touch with Libby