Women are more quadriceps dominant than men, and therefore tend to have weaker hamstrings. And having weaker hamstrings makes females more prone to knee injury. So, by emphasizing the top seven hamstring exercises provided in this article, you won’t just build sexier, better looking legs— you will also build a stronger, more well-balanced lower body that may be less prone to knee injury.

A 2007 study published in the Journal of Strength and Conditioning Research did a comparison of hamstring and quadriceps femoris muscle activity between men and women during a single-leg squat, and found that men activate their hamstrings more effectively than women because women are quadriceps dominant.1 This is crucial because females are two to eight times more likely to sustain an ACL tear than their male counterparts.2,3 And, research investigating the potential reasons why females are more prone to ACL injury has found that this combination of increased quadriceps activation and later onset of hamstring activation in females suggests that females may experience excessive anterior tibia (shin bone) shear forces at the knee.4

In regard specifically to knee injury, the Hunt Valley Consensus Conference on ACL injuries concluded that strong quadriceps activation during eccentric contraction was considered to be a major factor in injury to the ACL.7

Additionally, strength imbalances of the hip extensors (hamstrings and glutes) have not only been linked to an increase in rates of lower extremity injury in females, but also increased instances of low back pain.8

Getting the Most Out of Your Hamstring Training

A 2014 study published in the Journal of Strength and Conditioning Research investigated the relative muscle activity of the hamstring group and selected surrounding musculature during the leg curl, good morning, glute-ham raise and Romanian deadlift (RDL). The study found that hamstring activity was maximized in the RDL and glute-ham raise, therefore the researchers concluded that “individuals who seek to maximize the involvement of the hamstring musculature should consider focusing on the glute-ham raise and RDL.”9

Another 2014 study also published in the Journal of Strength and Conditioning Research compared the stiff-leg deadlift and the lying leg curl exercises where movement originates at the hip versus the knee to investigate whether they would result in differential activation of the hamstring muscle complex.10

Since the previously mentioned research demonstrated that the RDL exercise, along with the glute-ham raise and lying leg curl, are effective exercise applications for maximizing the involvement of the hamstring musculature, the following list of exercises provides several different versions of the RDL to mix into your workouts to keep things fresh and interesting without sacrificing effectiveness. 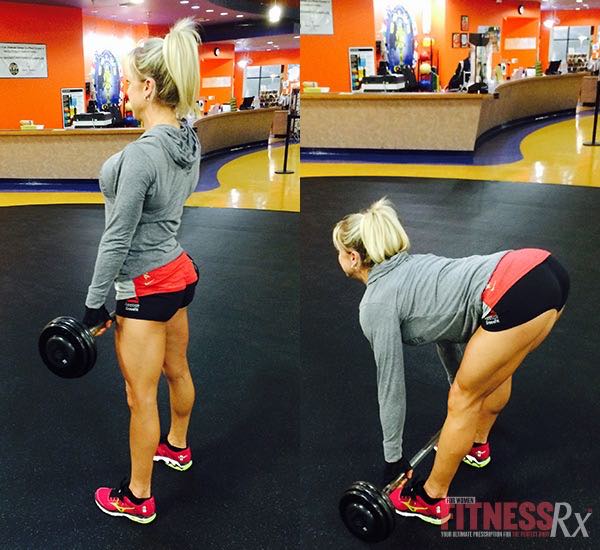 Stand tall with your feet hip-width apart, holding a barbell in front of your thighs with your arms straight. Keeping your back straight, hinge at your hips and bend forward toward the floor, keeping your knees bent at a 15- to 20-degree angle. As you hinge forward, drive your hips backward and do not allow your back to round out. Once your torso is roughly parallel to the floor or the weight plates lightly tap the floor, drive your hips forward toward the barbell, reversing the motion to stand tall again and complete one rep. 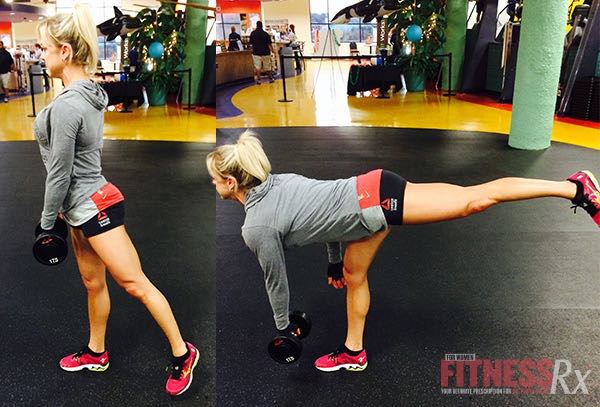 Stand on one leg and hold a dumbbell in the opposite hand. Keeping your back and arm straight, hinge at your hip and bend forward toward the floor, keeping your weight-bearing knee bent at roughly a 15- to 20-degree angle. As you hinge, allow your non-weight-bearing leg to elevate upward so it remains in a straight line with your torso, and do not allow your lower back to round out. At the bottom position (when your torso is roughly parallel to the ground), be sure to keep your hips flat and do not allow them to rotate. Once your torso and non-weight-bearing leg are roughly parallel to the floor, reverse the motion by driving your hips forward to stand tall again, completing one rep. 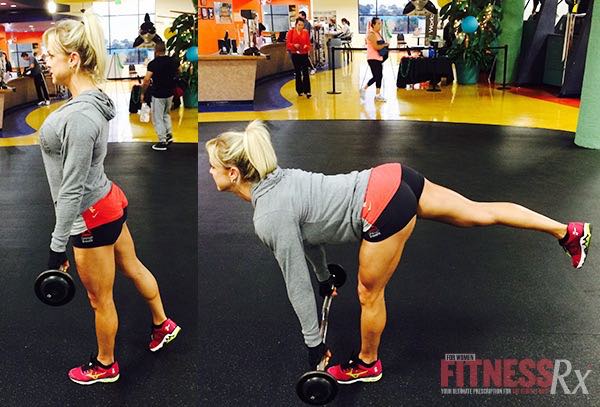 This is the single-leg  version of the Romanian deadlift and is performed using the same  mechanics as the double-leg Romanian deadlift. Stand on one leg while holding a barbell  in front of the weight-bearing thigh with your  arms straight. Keeping your back straight, hinge at your  hip and bend forward  toward the floor, keeping the weight-bearing  knee bent at a 15- to 20-degree angle. As you hinge, allow your non-weight-bearing leg to elevate upward so it remains in a straight line with your torso. Be sure to keep your lower back from rounding out. Once your torso and non-weight-bearing leg are roughly parallel to the floor or the weight plates lightly tap the floor, drive your hips forward toward the barbell, reversing the motion to stand tall again and complete one rep. 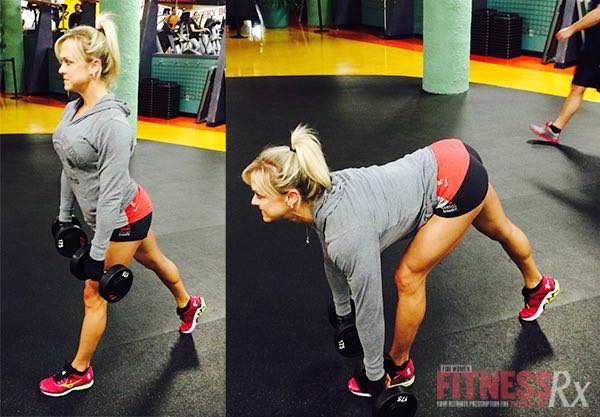 Stand tall with your feet hip-width apart while a holding a dumbbell in each hand at your side. Step forward with one leg, keeping your front knee bent 20 degrees and your back knee straight. As your front foot hits the ground, simultaneously lean forward by hinging at your hips. Keep your back straight and allow your rear heel to come off the ground. Reverse the motion by stepping backward and returning to a standing position. Repeat on the other leg.

To perform this exercise, you’ll need to use the machine that’s commonly known as the lying hamstring curl or lying leg curl machine. Assume a lying position with your hip joint on top of the apex of the pads. Adjust the pad you’ll be pushing against to a position that’s at the bottom of your calves. Hold onto the handles, and with your legs hip-width apart, pull your heels toward your glutes as far as possible. Slowly reverse the motion under control.

Place your feet at hip-width against the footplate in between the rollers with your knees just behind the pad. Begin with your torso upright and knees bent at a 90-degree angle. Slowly bend your knees without bending at your hips until your torso becomes parallel to the floor, or until you can no longer maintain your hips and torso in a straight line. Reverse the action by bending your knee and pulling yourself back up so that your torso returns to perpendicular to the floor.

Since many gyms don’t have a glute-ham machine, you can use a partner to perform this exercise or brace your feet under something stable. If you’re using a partner, have them place their hands on your ankles and firmly hold them down.

With your knees resting on a pad or a rolled up towel, perform the exercise as directed in the glute-ham raise machine description. Place your hands in front of you as you reach the floor. Due to the difficult nature of this exercise, you may have to use your arms to lightly push off the floor to aid your return back to the starting position. (See Demonstration)