Training on stability balls adds a valuable tool to your training arsenal as long as you understand its benefits and limitations.

Active women around the world have gone crazy over stability ball training. The balls are also known as Swiss balls, exercise balls, physioballs, gymnastic balls or fit balls. People use stability balls to force increased muscle activation during standard exercises such as curl-ups, chest presses and push-ups. The balls are usually made of vinyl and come in a variety of sizes to accommodate large and small people and various skill levels. A modification called Bosu balls are exercise balls mounted on small, portable platforms that provide unstable surfaces for push-ups, squats or lunges.

Like most new exercise methods, boosters overstate its merits and gloss over its limitations. Instability training increases core strength and promotes more stable knees, hips, spine, shoulders and elbows. However, training on unstable surfaces decreases the capacity to exert force during large-muscle weight-training exercises, which slows gains in fitness. Exercising on unstable training surfaces can be dangerous and increases the risk of injury in women with poor muscle and joint fitness.

Core fitness is a popular buzzword among personal trainers, coaches, active people and athletes, and stability balls are central to developing it. The core includes the muscles and connective tissue supporting the spine and midsection. It provides stabilization and control for almost all movement. Exercise experts push core fitness videos, most gyms offer core-building classes and retail outlets sell stability and Bosu balls like hotcakes. The volume of information about core exercises and programs can be confusing and contradictory.

Training on stability balls adds a valuable tool to your training arsenal as long as you understand its benefits and limitations. A program that combines training on stable and unstable surfaces promotes joint health and neuromuscular control, while maximizing strength, power and endurance.

Stability Ball Training and the “Core”

Twenty-nine muscles attach to the core, so a stable midsection is vital to all motions and postures. The core muscles stabilize the spine and help transfer force between the lower and upper body. They stabilize the midsection when you sit, stand, reach, walk, jump, twist, squat, throw or bend. The muscles on the front, back and sides of your trunk support the spine when you sit in a chair and fix the midsection as you use your legs to stand up. When hitting a forehand in tennis or batting a softball, most of the force is transferred from the legs, across the core, to the upper body. Strong core muscles make movements more forceful and preserve a healthy spine so you don’t get back pain. Also, toned, lean core muscles are central to a fit, sexy-looking body that turns heads.

Muscles work as a team to move the body – some contract concentrically (shorten) to move the skeleton, others contract eccentrically (lengthen as they contract) to brake and control movement, while others contract statically (contract but don’t move) to stabilize the body. A muscle’s role changes with the movement; it may act as a prime mover in one motion or a stabilizer in another. It’s important to build core muscles through a variety of training stresses – some static to fulfill the core muscles’ job as stabilizers, strength movements that serve as the foundation for functional movements and power exercises that prepare the core muscles for force acceleration and rapid changes in direction.

Most core exercise programs use stability balls to build the core muscles. While they do an excellent job of building core stabilizers, they do little to build dynamic strength or power in the core muscles, which is critical to a functionally fit body. This means that while stability ball training contributes to some aspects of core fitness, you must do other kinds of exercises to build well-rounded functional fitness.

The torso needs stability to transmit forces between the upper and lower body. During any dynamic movement (hitting a tennis ball or picking up a bag of groceries), the core produces force in some muscles, reduces force in others and stabilizes the midsection. When specific core muscles are weak or tired, the nervous system steps in and uses other muscles to produce movement. This causes abnormal stresses on the joints, decreases power and increases the risk of injury. Stability ball training builds endurance in the stabilizing muscles, which can contribute to improved health and fitness in the back, knees, ankles, shoulders and elbows.

Doing exercises like crunches and incline presses on stability balls forces the muscles supporting the spine (abdominal, spine, pelvic and hip muscles) to work harder. The ball creates instability, which increases muscle activation to stabilize the spine, shoulders and legs during exercise. There’s a tradeoff: instability activates more muscles to balance and steady the body during exercise, but reduces the capacity of the largest muscles to exert force and gain strength.

Most studies show less muscle fiber activation and overload in the large chest, thigh and hip muscles when doing exercises on stability balls compared to doing them on stable surfaces. Researchers from New Zealand, for example, found increased activation in the deltoids and abdominal muscles during a chest press on a stability ball compared to the normal bench press. Instability created by the Swiss ball required greater shoulder muscle activation to stabilize the scapula and humerus (shoulder bones) during the exercise. It did not increase muscle activity of the pectoralis major or triceps, the main muscles developed during the exercise.

Stability ball training provides some benefits to stabilizing muscles and is a good adjunct training method. It should not, however, be your primary means of training. Overemphasizing this type of exercise will not overload your major muscle groups as much as traditional training and will slow progress in your toning or fitness program.

Stability Ball Training for the Abs

Crunches are by far the most popular stability ball exercise. It is one of the best abdominal exercises because it builds the rectus abdominis (front ab muscle) and obliques (side ab muscles), while minimizing the load on the spine. Japanese researchers showed that placing the ball under the low back loaded the abdominal muscles better than putting it under the upper back. They assessed the effectiveness of ball position in working the upper and lower parts of the rectus abdominis and external oblique muscles using electromyography, which measures the electrical activity of muscles during exercise. You can vary the difficulty of the crunch exercise by changing the position of the ball under your back.

Ball crunches are not for everyone. Research by back expert Stuart McGill from Canada showed that doing crunches on a ball caused a greater spinal load than doing the exercise on the floor. People should avoid ball crunches until they have developed fit spinal stabilizer muscles by first doing exercises on the ground such as curl-ups, side-bridges (support weight between the forearm and feet with body straight) and bird-dogs (from kneeling position, extend right arm forward and the left leg back and hold position for 10 seconds; repeat using the opposite arm and leg).

Maximizing the Benefits of Stability Balls

Build good core muscle strength using ground-based exercises before progressing to the stability ball. Stability ball training places considerable stress on the spine. People with back pain or poor fitness should not attempt it without proper conditioning.

Progress slowly and maintain good technique. You will fatigue quickly when you begin stability ball training. Start with a low-volume workout and build up gradually.

Use a good-quality ball that won’t break or slide out from under you. Sliding off a ball to the floor can cause serious injury, so do stability ball exercises on a fairly rough surface that will keep the ball in one place. You don’t want to break your tailbone or hurt your back. Also, make sure the ball is fully inflated.

Start with a larger ball. Smaller balls are less stable and require more skill. Learn to balance on a large ball before progressing to smaller sizes. As a rule of thumb, start with a ball that places your legs parallel to the ground (or slightly above) when you sit on it.

Use stability ball training as an adjunct method to promote overall fitness. Don’t do all your exercises on the balls. For example, do curl-ups on the ground two days per week and on a stability ball one day per week.

Stability balls have stood the test of time. Fitness experts recognize them as valuable for promoting strength, muscle endurance and core stability. They won’t do it all, but they are an important part of your fitness arsenal. 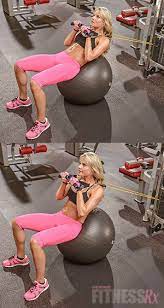 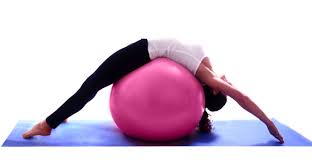 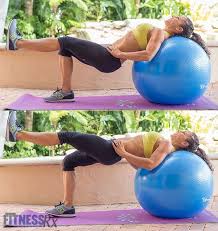 Jakubek MD. Stability balls: reviewing the literature regarding their use and effectiveness. J Strength Cond, 29: 58-63, 2007.