The supplement industry is bursting with fat-loss supplements. At least you, as a FitnessRx reader, realize that hard work in the gym is a crucial component of getting lean. You know that burning fat is going to require some dietary modifications (i.e., calorie restriction, reduced carbohydrates, nutrient timing). You can appreciate the concept that “sweat is fat crying.”

Dieting does result in metabolic adaptations that may be counterproductive to your goals. As we go into any caloric deficit to burn fat, our bodies try to adjust by slowing down our metabolism and conserving energy. This is where “fat-loss” supplements can be of assistance. We know that there isn’t a magic pill that will let us sit around and eat burgers while getting lean. However, we do have supplements that can augment our diets and improve our metabolism. 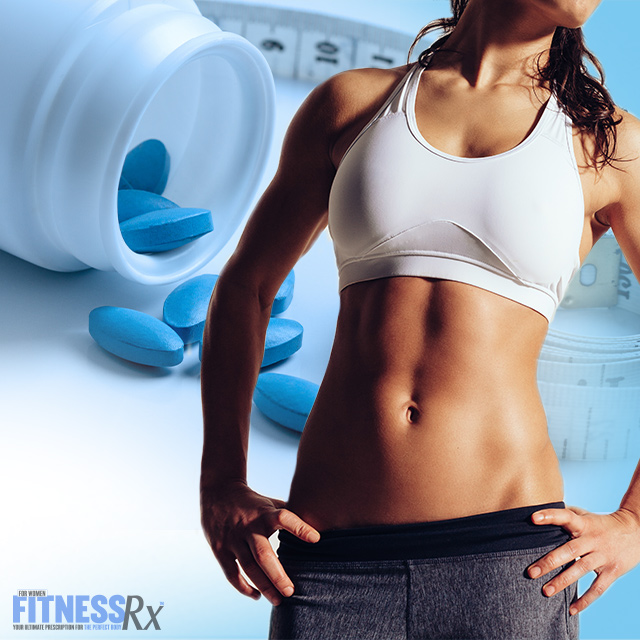 Dietary supplements can improve our weight-loss objectives through a number of mechanisms:

The main mechanism for enhancing most of these objectives in our bodies is the activation of the sympathetic nervous system (SNS). The SNS is the system that produces adrenalin (epinephrine) and noradrenaline (norepinephrine, NE). We all know the power of the SNS when we experience the “fight or flight” response of fear or excitement during a competition. Your heart starts to pound, you get sweaty and last thing on your mind is food. This is the mechanism that many successful fat-loss supplements try to harness.

One of the most effective supplements of all time was the “ECA stack,” God rest its soul. ECA stands for ephedra, caffeine and aspirin. Unfortunately, this very effective and synergistic combination of compounds is no longer legal since the U.S. Food and Drug Administration (FDA) crackdown on ephedrine. The premise of the combo was to hit the SNS from multiple angles.1 Ephedrine stimulated the release of NE, just like exercise and fear. Caffeine and other alkaloids (theobromine, theophylline, etc.) prevent the NE signal from being turned off. The aspirin inhibits the formation of prostaglandins that can modulate the action of NE. Other compounds can prevent the breakdown of NE (polyphenols like green tea catechins inhibit COMT, or catechol-O-methyltransferase) or further turn on the signal from NE on its target tissues like the fat cell, muscle and heart (forskolin, xanthines).

Supplements also try to turn on our metabolism by specifically “turning up the heat.” Our bodies have a tissue called “brown fat” or brown adipose tissue; BAT for short. BAT is much more metabolically active than the “white adipose tissue” that creates our insulation and spare tires. BAT burns fat to release energy in the form of heat. Many scientists are searching for ways to turn on BAT to improve fat-burning metabolism. Fortunately, we can turn on BAT with environmental changes (lower the room temperature), food changes (eat more protein) and supplements (capsaicinoids, melatonin, etc.).

Other supplements say they turn on thyroid hormone, reduce conversion of sugars to fats, and decrease the absorption of fats or sugar. In the remainder of this article, I will lay out some data on common and up-and-coming fat-loss supplements. As we move forward, it is important to understand that research in animals does not always translate to an effect in humans.

Everyone knows what caffeine can do to them. Who hasn’t tried a Starbucks coffee? If you’ve ever tried a fat-burning supplement, you have likely had some pure caffeine. Caffeine from tea and coffee may provide added benefit from the other active polyphenols that may have fat-burning benefits as well (see below). If nature put caffeine and catechin polyphenols in the same package (tea), then why not put them together in a supplement? Caffeine, alone or in combination with green tea catechins, dose-dependently increases energy expenditure and fat oxidation.2

Caffeine may be one of the most-studied thermogenic compounds. It stimulates the SNS, controls appetite, mobilizes fats from stores and increases fat oxidation.3,4 The main problem with caffeine is that we very quickly become desensitized to its effects.5 Those who regularly drink a Venti coffee at Starbucks are not likely to see its beneficial effects on weight loss. I would suggest that if you want caffeine to work in your favor, limit your exposure to it in the off-season. The chlorogenic acids from green coffee been extract may also provide a fat-burning effect, although the jury is still out.18

As mentioned earlier, the polyphenols from teas like green tea have powerful effects on fat burning. Catechins in tea inhibit the enzyme COMT that is present ubiquitously in the body, and degrades SNS compounds such as NE.4 Through this inhibition of COMT, the SNS activity of NE remains activated. Thus, the catechins keep the actions of caffeine and exercise “revving” longer.

The problem with green tea extracts is when the most active catechin, epigallocatechin gallate (EGCG), is super concentrated. Many supplements overdose concentrated versions of EGCG. Recent studies suggest that the liver toxicity attributed to certain dietary supplements may have been a result of high EGCG concentrations.6 However, the dosages found in unconcentrated regular green teas do not seem to be toxic. This is probably just a case of too much of a good thing going bad. Use caution when using green tea extracts high in EGCG; if you have liver issues, ask your hepatologist first.

Synephrine, often referred to as bitter orange extract, is a fat burner with similar actions as ephedrine. It has had the dubious task of replacing ephedrine in dietary supplements. Unfortunately, synephrine isn’t quite as strong as ephedrine. Despite this inferiority complex, synephrine is beneficial as an ingredient in your fat-burning supplement.

Ever watch someone sweat while eating hot wings? I have, and the thermogenesis is unmistakable. Hot peppers make us sweat, and sweat is fat crying, right? Science supports the use of cayenne pepper extracts (standardized for capsaicinoids) in our fat-burning supplements.

In particular, capsaicin, the major pungent compound of red chili pepper, is a thermogenic ingredient that stimulates energy expenditure.8 Capsaicin increases fat oxidation, limits appetite and increases energy expenditure. Although some of these effects appear to be through SNS stimulation, again, capsaicin has little effect on blood pressure. Interestingly, capsaicin supplementation appears to limit the decline in metabolism that occurs with calorie-restricted dieting.8

Beyond the well-studied effects mentioned above, capsaicin also appears to augment fat burning through other mechanisms. It is clear that capsaicin turns on metabolism through activation of brown fat.9 More fascinating is that an animal model suggests that capsaicin may actually be able to turn on genes in white “storage” fat, that cause it to convert to fat-burning brown fat. It has also been suggested that capsaicin can alter the gut microbiota (much like probiotics) to help induce a fat-burning animal.

Black pepper isn’t quite as hot as chili peppers, and isn’t even a true pepper (it’s a spice), but it too has valuable metabolic effects through its constituent, piperine. Piperine is a pungent component of black pepper, much like capsinoids are with chilis, albeit much lower on the Scoville scale. Piperine is thought to exert some of its beneficial effects via mechanisms similar to capsaicin. In mice fed a high-fat and high-sugar diet, investigators found diets with up to 0.05 percent piperine and one percent black pepper resulted in significantly less fat accumulation over four weeks.10 In another study with rats fed a similar diet with piperine, the treatment group experienced lower blood pressure, improved glucose levels, less oxidative stress, less inflammation and improved liver function.11 These findings suggest that piperine may be of value in burning fat while cutting, or it may even prevent accumulating fat during bulk dieting.

Kaempferol is a small polyphenolic flavonoid found in broccoli, spinach and berries. It appears to increase energy expenditure through thyroid hormone activation. It appears to do this through enhancing the conversion of the less active T4 to the very active T3 molecule. This mechanism has been demonstrated in the laboratory through its actions on the enzyme deiodinase in human muscle cell cultures.12 Furthermore, studies in cancer cells show that flavonoids like kaempferol and quercetin (quercetin being the strongest) are very strong inhibitors of fatty acid synthase.13 Could this translate to your cruciferous vegetables helping you to burn fat? The fiber alone will help you absorb less fat, so eat your veggies!

This compound has been known to have fat-burning and muscle-increasing effects. Ursolic acid appears to be an amazing compound in rodents, one that increases muscle mass while keeping fat at bay. A recent study in humans supplemented 450 milligrams of ursolic acid (from rosemary) in three divided doses of 150 milligrams, with meals, over the course of eight weeks in weight-trained subjects.14 Researchers found increased serum irisin (12%) and IGF-1 (22.8%) more than placebo, but no changes in body composition. They did find improvements in strength, however. It would be interesting to see if this compound would help maintain lean muscle when dieting.

The effects of various fatty acids on your metabolism are astounding. Some fats are stored easier than others, whereas other possess a thermic effect and burn efficiently. Fish oils, CLA and MCT oils have all been shown to be effective mediators of fat storage and metabolsm.1 The science is mixed, but healthy fats such as these may play an important role in your fat-burning supplementation. A meta-analysis of the effects of CLA supplementation showed that 3.2 grams per day can produce modest fat loss.15 It is important to note that when using fatty acids as part of your fat-loss strategy, that supplementing with something like DHA won’t have any effect if you are eating 30 grams of saturated fat from beef every day. You need to alter the ratios through supplementation AND food.

Dr. Oz has recently been taken to task by the U.S. Congress for his blatant use of inflammatory language to sell his miracle fat-loss cures. Claims such as these are being taken very seriously by the Federal Trade Commission (FTC), and they are taking action where the FDA has not. Dr. Oz has made many statements regarding Garcinia cambogia, raspberry ketones and other compounds in recent years that made them fly off the shelves as fat-burning supplements.

Garcinia cambogia is a source of hydroxycitric acid (HCA). Hydroxycitric acid inhibits an enzyme called citric acid lyase that is required for the synthesis of fat in your body. In rats, HCA appears to be able to limit the production of fat and reduce appetite. However, studies in humans show minimal effects and are quite variable in response. The studies that have shown a positive effect have been unimpressive.16,17

Raspberry ketones are a flavoring agent used in processed foods found in red raspberries, but are often synthetically produced. They have a structure that is quite similar to synephrine, ephedrine and capsaicin. In the lab, raspberry ketones show a strong effect on the metabolism of fat in cell cultures at very high concentrations.19 Attaining such concentrations in humans seems quite unfeasible. In fact, there are no human studies that have examined the effects of this compound without combining it with others.

Dr. Victor Prisk is a board certified orthopaedic surgeon and IFBB professional bodybuilder in Pittsburgh, PA. Dr. Prisk is an active member of the GNC Medical Advisory Board and creator of the “G.A.I.N. Plan.” He is an NCAA All-American gymnast, champion swing dancer and NPC Welterweight National Champion.