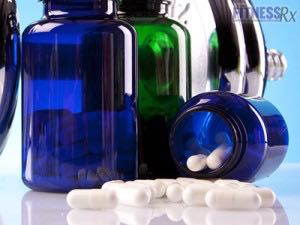 When most women think about gaining muscle and strength, they think they need to eat like powerlifters— boatloads of calories and carbs to gain a few pounds of muscle and increase their lifts. But it doesn’t have to be this way. Changing up exercises from isolation to compound movements, reversing exercise sequence and using reps in the eight- to 12-rep range can all lead to gains in strength overtime.

But there is actually another way to increase strength that is quicker, doesn’t require added calories and can help drive even greater results when combined with a proper strength-building workout program and solid nutrition plan. Supplementing for strength and muscle gains is a complementary approach that can augment not just strength, but also your power, reaction time, endurance, lean muscle mass and energy levels. There are many supplements on the market today that offer up improvements in strength, but few that actually deliver. This post reviews five of the top supplements.

What Is it? Beta-alanine is a non-essential amino acid that can be used to increase intramuscular concentrations of carnosine. Carnosine is a dipeptide that is made up of beta-alanine and histidine and has been shown to buffer pH in the muscle. Carnosine cannot be supplemented alone because it is broken down by the body. Histidine on the other hand, is abundantly available in the body, but its presence does not influence carnosine levels. Beta-alanine is the rate-limiting step, ingestion influences intramuscular carnosine the most.

How Does It Work? By buffering pH in the muscle cells, it allows for greater aerobic and anaerobic capacity. It has been shown in research to support increases in strength, power, training volume, and has been show to reduce fatigue and increase energy and endurance levels. Beta-alanine has also shown even greater benefits when combined with another product on this list— creatine. When supplemented together, they showed increases in strength, lean muscle mass and decreases in body fat!

How Do You Dose It? Try using 3.2 grams per day. Beta-alanine can produce a “tingle” and “flush” effect similar to niacin, which can be unpleasant for some athletes, but can subside with continued use.

What is It? By far, creatine is the most popular strength supplement on the market today, and for good reason. It is the gold standard by which all other nutritional supplements for strength and power are compared. According to a position stand published by the International Society of Sports Nutrition, creatine monohydrate is the most effective ergogenic nutritional supplement currently available to athletes in terms of increasing high-intensity exercise capacity and lean body mass during training. There are many different forms of creatine available— everything from esterified formats, to the very popular ultra-concentrate creatine hydrochloride, but by far the most researched form is still the traditional creatine monohydrate.

How Does It Work? Creatine acts like a donor to adenosine diphosphate or ADP, providing a phosphate group to produce adenosine triphosphate or ATP, our muscles’ primary energy source. Supplementing with creatine increases the availability of creatine phosphate, which means there are more phosphates available for ATP re-synthesis and therefore more energy to force more reps, and push up more iron, for longer duration. It can improve many aspects of anaerobic exercise performance, including strength, power, sprint performance and maximize muscle contractions. Currently, there are several hundred peer-reviewed research studies that have been conducted to evaluate the efficacy of creatine supplementation, and of these studies, nearly 70 percent have reported a significant improvement in exercise capacity! You can expect to experience strength gains, but also gains in lean mass. Typically an eight-week cycle can lead to an eight- to 10-pound increase in lean mass!

What is it? Branched-chain amino acids (BCAAs) provide a convenient and easy way to ensure you have a positive nitrogen balance in the muscles, which can assist in building muscle and gaining strength. BCAAs consist of isoleucine, valine and the most important, leucine. Leucine stimulates the muscle-building processes when present in muscle cells.

How Does it Work? BCAAs play a role in protein synthesis, increasing lean muscle mass, and muscular strength. By providing the body with a steady supply of BCAAs, it ensures muscles remain in a positive nitrogen balance, whereby the rate of muscle breakdown is balanced out by the rate of muscle building or protein synthesis. In order for muscles to grow, there must be a positive protein balance. It has been shown that ingestion of BCAAs can peak plasma levels of amino acids in muscles, increasing anabolic response to exercise. The result? Increases in muscle building, improved strength and decreased recovery time!

How Do You Dose it? BCAAs can be taken prior to, during and after your workout to ensure there is an adequate supply of amino acids available to keep muscles in a positive state of nitrogen balance, and enable muscle building and recovery, while also allowing energy for workouts. BCAAs should be consumed in a 2:1:1 ratio of leucine to valine and isoleucine, at a total dose of 10 grams.

What is it? Caffeine is the mostly commonly used energy booster available. Most people have used caffeine for its energizing effect, whether by consuming your morning coffee or perhaps from a pre-workout supplement jolt. Caffeine’s long-term use as an energy booster is due to its ability to stimulate the nervous system, which can translate into more than just simply a boost of energy!

How Does it Work? It is a potent central nervous system stimulant, but it’s also highly involved in increasing fat mobilization from fat cells into the blood where it can be used as energy. Caffeine’s stimulant properties have also been shown to boost muscular endurance and strength, delay the onset of muscle soreness during exercise and improve focus and concentration. It can also help boost metabolism and reduce hunger.

Caffeine increases the mobilization of fat cells for use as fuel, and can also increase the effectiveness of other stimulant-based supplements by blocking a key enzyme involved in degradation, allowing them to stay active for longer periods of time. This can result in prolonged energy and increased fat burning.

How Do You Dose it? Intake of caffeine is partly dependent on your threshold and sensitivity. Typical dose of 200 to 400 mg before a workout will help to increase focus, endurance during workouts and help improve strength.

What is it? Citrulline is a non-essential amino acid that plays many vital roles when it comes to maximizing your workouts. Supplementation with citrulline can increase levels of other key muscle-building and strength-gaining nutrients, including creatine.

How Does it Work? Citrulline malate can assist in the elimination of byproducts of protein metabolism, reduce the negative effects of ammonia, and can help eliminate the lactic acid burn experienced during workouts, reducing muscle soreness and fatigue. Citrulline malate can also increase anaerobic energy production, resulting in an increased number of reps per set. Lastly, it can increase aerobic energy production by increasing the rate of muscle energy or ATP production during exercise.

How Do You Dose it? Citrulline malate should be taken along with the other strength-gaining nutrients on this list, approximately 30 minutes prior to your workout. A dose of 1 to 3 grams is recommended.