Who doesn’t love bread? Most people really enjoy a fresh piece of soft and delicious bread. It’s pretty hard to resist, even for the hardcore fitness focused individuals. However, because traditional bread is loaded with processed flour and sugar, it’s usually not something on your clean eating grocery list. And, if you want to lose fat and tighten up, carbs (like bread) need to cut back to some degree. However, recently, new varieties of bread have come along with promises to bring back bread from the once forbidden list. Enter Sprouted Grain Bread. 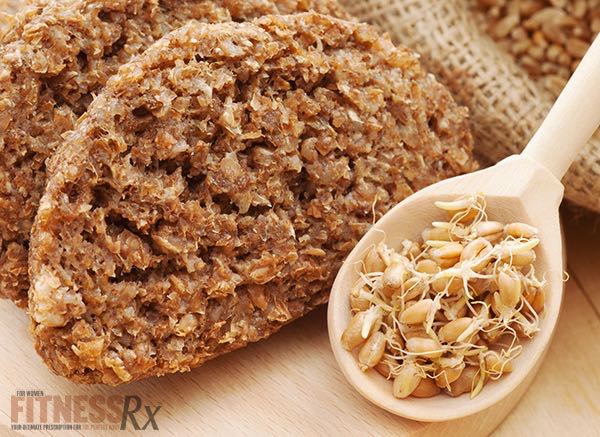 What is Sprouted Grain Bread?

Sprouted Grain Bread is made from whole grains that have been allowed to sprout prior to processing. Sprouted grains are used prior to becoming a fully mature plant. Sprouted grains can come from a variety of grains including wheat, milet, spelt and barley. Sprouted grains have a different composition from the grain that is used in regular bread. Traditional bread uses refined or pulverized wheat, which removes most of the nutrients. Sprouted Grain Breads often contain other nutrient-rich foods like flax seeds, chia or legumes and soybeans.

No, the sprouts of grain do contain gluten. Although they are safer alternative for those who are gluten sensitive rather than allergic, they are not well-tolerated by those who have more severe allergies or intolerances. If you have Celiac or Crohn’s disease, you should not eat sprouted grain bread.

Unlike traditional white or even whole wheat bread, sprouted grain bread does provide better nutritional value versus processed grains. Sprouted grains are more nutrient dense than refined grains, providing more soluble fiber, amino content and vitamins and minerals, including folate, vitamin E, C and beta-carotene. Sprouted grains also provide less starch than regular grains, as they use some of the starch as energy during the sprouting process, and thus breads made with sprouted grains have lower carbohydrate values.

How is Sprouted Grain Bread Made?

Sprouted Grain Bread is made with grains that have been soaked and allowed to sprout using a controlled environment including temperature of the water, the air, and the time allowed for sprouting. Once the sprouting occurs, the grains are drained and grinded to be used in baking. Most breads use a blend of various sprouted grains.

How does Sprouting Increase Nutrients?

What’s Really in it?

While sprouted grain bread is nutritious, it’s still bread and still a carbohydrate. So, you should watch how much you are consuming to ensure you are within your target nutritional parameters for your goals. Moreover, sprouted grain bread also still contains gluten, which can cause allergies and intolerances to those who are sensitive.  So, if you are a go for gluten, enjoy sprouted grain bread a few times a week with natural peanut butter and a few slices of banana or with your egg whites, but just don’t over do it!