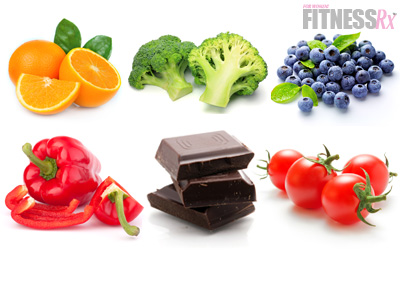 Every day the body is exposed to toxins from the environment, stress and intense workouts. This can cause an increase in oxidation on the body, free radicals including lactic acid and ammonia, and toxins that begin to build up, preventing the recovery process. Research has shown that oxidative stress can impact your ability to function and perform at your best, which we all know is important when it comes to staying on top of our “A” game! Oxidative stress can lead to increased recovery time after a workout, and rob you of energy. Although over time, our body has the ability to adapt to oxidative stress, especially us women, at some point we will reach our limit! Chances are if you are working out regularly, under an extreme amount of stress— for instance, stress caused by work, intense workouts or other commitments— you are probably at your tipping point! And although elimination of stress can be the easiest answer, it is usually not always possible! Combine that with a strict diet and you are no doubt missing important antioxidants and essential nutrients that can keep your body from functioning at an optimal rate.

Don’t worry— “super foods” and their supply of antioxidants to the rescue! Antioxidants can work to decrease the harmful effects of oxidative stress caused by free radicals, which are the damaging molecules that are the result of metabolic processes occurring in our bodies, whether induced by stress, exercise, environment, and every woman’s fear— aging! Antioxidants can work to halt the damage caused by free radicals by binding to active receptor sites, scavenging and neutralizing free radicals’ damaging effects. Super foods can have a positive effect on building a lean body, keep your metabolism firing, your energy levels elevated and your immune system functioning optimally. What makes a food a “super food” is its ORAC value, which is the oxygen radical absorbance capacity, or the ability of a food to scoop up and neutralize free radicals. The higher the ORAC, the more antioxidant power the food possesses. Incorporate a few of the following antioxidant-rich super foods into your daily diet and become a Super Woman in no time!

Citrus Fruit: Citrus fruit is a source of the powerful antioxidant vitamin C, which can help protect our lean muscle, and help to generate other antioxidants. Multiple studies have found that levels of vitamin C are diminished in the body of those who exercise regularly. Vitamin C can also help regenerate reduced vitamin E back to the active state, another powerful antioxidant. Vitamin C has been shown to reduce lean muscle damage when compared with those deficient in the vitamin. Another study found that vitamin C does control reactive oxidant species formed during exercise. If not controlled, these species have the ability to react with cell membranes and damage them, initiating a series of other damaging reactions. In addition to its antioxidant properties, vitamin C is needed for absorption of iron, which is necessary to help oxygen bind to haemoglobin in the blood. Oxygen is critical for proper muscle performance, and keeping energy levels high. Vitamin C is also involved with amino acid metabolism and the formation of collagen, which makes up connective tissue, and is essential for holding your bones and muscles in place, not to mention keeping our skin looking its best. Just one orange contains about 100 percent of your daily value for vitamin C. And if you would rather not have the sugar, choose lemon. Add in an ounce of lemon juice to each glass of water you drink daily.

Broccoli: Contains many potent antioxidant micronutrients including lutein, beta-carotene, vitamin C, selenium and diindolylmethane. Diindolylmethane is a potent modulator of the innate immune response system. This extract is also an excellent source of indole-3-carbinol, which can boost DNA repair in cells! Add this high-fiber veggie to your salads or eat it as a side with your protein.

Beans: Loaded with phytochemicals including saponins, protease inhibitors and phytic acid, which can help protect cells from damage. In a recent study, beans were found to be the highest antioxidant containing food! Just one half cup of red beans provides an ORAC of 13,727. Beans are a great source of protein and are inexpensive and filling.

Berries: Packed with fiber, antioxidants, vitamins A and C, their phytochemical properties may also help reduce the risks of some diseases. Blueberries and strawberries are great berry options, but the acai berry is considered to have the highest antioxidant property of any other berry! Anthocyanins found in acai and black raspberries, which have been shown to improve mental function, concentration, memory and mental clarity. Berries also provide a source of fiber and less sugar than other fruits. Just one cup of strawberries provides 50 calories, 3 grams of fiber and only 7 grams of sugar. Add them to shakes or oatmeal.

Dark Chocolate: Rich in flavonoids and catechins, dark chocolate can promote heart health. Flavonoids in dark chocolate also help reduce insulin resistance. It is low glycemic, which means it won’t cause huge spikes in blood sugar levels. It also contains several compounds that can effect mood and cognitive function, including PEA or phenylethylamine, which increases the release of feel-good endorphins. Although this super food is generally advised against during strict diets, one ounce of 70 percent dark chocolate can offer up to 170 calories and only 6 grams of sugar. Not too bad considering the benefits!

Red Bell Peppers: Full of vitamins A, C and E and the antioxidant lycopene, which makes red bell peppers another great super food. One whole pepper provides approximately 40 calories, and also provides vitamin B6 and dietary fiber. Add peppers to your salads or eat cut them up and eat them as snacks between meals.

Spinach: Extremely rich in flavonoids and carotenoids that provide anti-inflammatory benefits as well as antioxidant benefits. Given the fact that spinach is an excellent source of the antioxidant nutrients—including vitamin C, vitamin E, beta-carotene, and manganese— as well as a very good source of zinc and a good source of selenium, it’s no wonder that spinach helps lower the risk of numerous health problems related to oxidative stress. Spinach also provides vitamin K, E, B6, B2, folic acid, folate, niacin and the minerals magnesium, calcium, iron, potassium, phosphorous and copper. This wonder food can be used as a base to leafy green salads, to omelets or even a green-based shakes!

Tomatoes: Studies have shown that a diet rich in lycopene, the antioxidant found in tomatoes, can help decrease the risk of certain cancers, as well as reduce the risk of heart disease. Fit tomatoes into your nutrition plan by using tomato salsa as a condiment, or even cherry tomatoes in your salad.

Artichokes: Maybe not your typical diet food, but at only 60 calories each they are worth trying. Artichokes have a super high ORAC value of 7,900 and contain phytochemicals that may lower cholesterol levels. Cooked artichokes can be diced and added to salads.