Could it be true? A meatless burger that tastes like the real thing?

For years, chefs, researchers and burger connoisseurs have pursued this dream, but a company called Impossible Foods based in Redwood City, California has made the impossible probable.

The New York Times and the New York Post reported on this marvel of the culinary world earlier this month. Intrigued by the concept, FitnessRx decided to investigate further.

Here is what we discovered. The burger is entirely meatless. You got that right— zero meat whatsoever, but this is not a veggie burger, either. This burger was devised not in a kitchen, but in a lab!

Impossible Foods’ CEO Pat O. Brown states on the company’s website,“… Our singular mission is to enable the world to continue to enjoy the foods they love and increasingly demand, without catastrophic damage to the environment. Our strategy was simple: invent a better way to transform plants into delicious, nutritious, safe and affordable meat, fish and dairy foods that consumers love.” 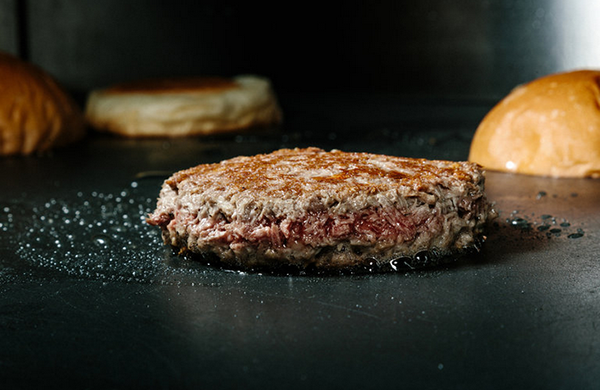 What a Novel Concept!

Imagine being able to enjoy all the foods that you love without having to consume any type of meat. For a burger lover who is thinking of pursuing the vegan lifestyle, this is a dream come true.

So, how does this happen? After $80 million to develop and research, the burger— derived from genetically modified yeast— made its debut last year. In fact, super chef Giada DeLaurentis came out with her own version of a meatless burger that is very tasty, and is made primarily from lentils. However, Impossible Foods believes that their “Frankenstein burger” is unlike anything the world has ever seen. One key point of this burger is that the protein used, called soy leghemoglobin or “heme” for short, required approval by the U.S. Food and Drug Administration (FDA). Why? Because this protein is created from the GMO (genetically modified organism) yeast, hence the term “Frankenstein burger.”

Reporter Steve Cuozzo from the New York Post, as well as Stephanie Strom from the New York Times, sampled the burger at the upscale Momofuku Nishi restaurant in Manhattan, run by Chef David Chang. Cuozzo reported:“… I found it a feeble imitation of a real beef burger and even lousier than veggie burgers made from grains and legumes.”

While there are sides that are for and against the benefits of GMO products, the ultimate decision is what these ingredients have on the body itself. In reviewing the nutritional facts on the Impossible Foods website, we found that in one serving, there is 10 percent saturated fat! As we know, not all saturated fats are bad, but with that much saturated fat— why wouldn’t someone want a real burger, or a veggie burger?

Brown also states on the company’s website, “…. With support from investors who understand and believe in our mission, we built a team of scientists who have worked tirelessly on this problem, understanding meat— what underlies its flavor, texture and all its physical properties— far better than it was ever understood. One of many discoveries they made, perhaps the most important, is that a molecule called heme is what makes meat taste like meat. Without heme, you can’t make meat that will satisfy the billions of people who love meat.”

While FitnessRx did not get a chance to try the Impossible Burger, we leave it to you to judge. What are your thoughts? Let us know on our forums or on our social media outlets. Would you like to try this burger?