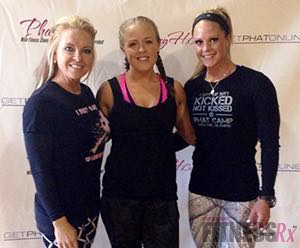 Arriving at the kick off to the Phat Camp 2014 season in Calgary AB, January 24-26, I had zero expectations. Truthfully, I had registered mainly to spy. To spy success stories, secrets and tips from not only the champions—Nicole Wilkins and Jen Hendershott—but also from the other campers; to spy the mannerisms of these same champions and learn from these mannerisms moving forward in my own healthy journey. Well spy I did, but I also gained a very profound respect for many other women and their struggles, and also viewed the humanism of fitness celebrities, and the real life struggles and accomplishments that have brought them to where they are today. Allow me to recap the event from my perspective—a regular working mom and wife who strives to motivate others to be more active every day through leading by example.

Setting The Tone For The Weekend

Friday evening (the first day of camp) was chaotic (in a good way), as one can only imagine. The excitement of coming face-to-face with the pros, the nervousness of meeting new friends and also the apprehensiveness of completing the weekend tasks that lay ahead. A welcome hug and hello from both Jen and Nicole quickly dispelled those feelings, as they each worked their way around the room making small talk with all of the campers. After a speedy registration, we all got comfy on the gym floor with excitement to hear what had to be said. The passion that Jen displays for inspiring others from the Phat Camp platform, which she developed 13 years ago, was felt strongly. This 2014 season is somewhat of a passing of the torch ceremony to Nicole Wilkins. Next year, Nicole will be THE face of the Phat Camp program.

The evening wasn’t over as we were all lead through a great basics (squats, lunges, bear crawls, burpees, long jumps and more) workout and then summoned to do some thought journaling. This allowed the campers a moment to reflect inwards on their expectations of themselves and the camp weekend, as well as to catch their breath after a workout. Surprisingly and pleasantly, many of the women were ready to openly share the thoughts they had written; and with that, the premise of support, unity, friendship, encouragement and hard work was set for the entire weekend event.

Highlights Of The Weekend’s Awesomeness 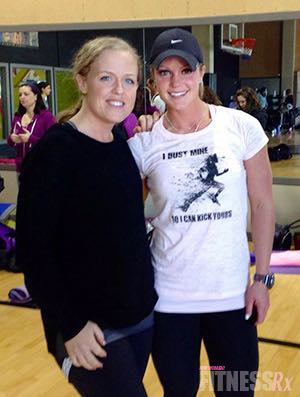 Saturday and Sunday were jam-packed days full of Q&A’s, sweat, encouragement and awesome advice from both Nicole and Jen. Laughs were had, friendships were formed and personal stories abounded. Without divulging too much awesomeness about the weekend (as I encourage you all to attend an event for yourself!) some of the motivational highlights included – new moves to challenge your muscle groups, different perspectives on movement types/styles, thought provoking conversations, lots of sparkling sweaty faces and encouragement from a group of 100+ ladies, all just like each other, in search of a little bit MORE from themselves and life in general.

Overall, whatever your reason may be to attend a Phat Camp in your area, your expectations will be met and hopefully exceeded. The Phat Camp premise of supporting each other to be strong, accountable women is moving and will inspire you to be your best. Above all, both Nicole and Jen were friendly, approachable and real. The camp and the attendees varied greatly between women just starting or returning to fitness after a hiatus, women with dreams of competing and women who dream of training like a pro but never setting foot on stage.

The “Secret” To Success

For me, I originally went to spy (as you have learned) so that I can in turn spread any “secrets” throughout my own motivational challenges and groups. What I took away from the event however is that there are no “secrets,” only WORK, and that the people in the spotlight are just like you or I, normal average people just striving to be better. We all need to share the good word of MOVEMENT and STRENGTH with everyone we meet. Stay strong out there, everyone!

Through motivational, incentive-based challenges, Dayna has personally encouraged numerous ladies to accept fitness into their lives. Not only personally, but also via her social media presence, she also inspires thousands of people around the world to think of the healthier side of life. A mom of two, wife, full time employee and more, Dayna prides herself in leading by example for her family and immediate friends as well as all of you. You can follow Dayna’s motivating posts and stories of her journey to losing 70+ pounds on Facebook at www.facebook.com/airdriehealthandwellness (search Beyond Health and Wellness) or on Instagram.