So simple, yet more powerful than you probably think! Breathing is one of those actions that we do constantly yet never really think about. It’s been called the lead dog of the Autonomic Nervous System and obviously it’s something we all need to do! ;) Sure at times we might think about our breathing; maybe when we’re out of breath or our heart rate is raised and you can feel and hear your breathing increase in speed and intensity or maybe when we’re trying to relax, you take deeper breaths or even hold it for a period of time to calm yourself. In any case, breathing has such a powerful influence on our bodies AND our lives, both positively and negatively. 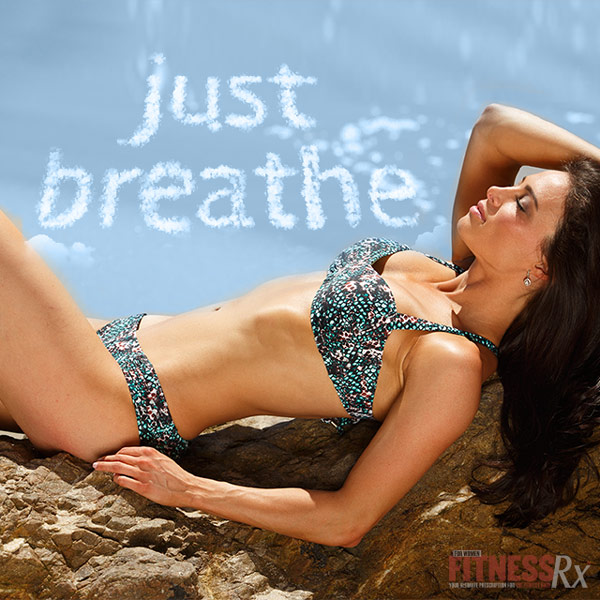 The reality is, most of us have become shallow, shoulder/chest breathers and if you’re like me, you probably don’t even realize it or the effect it could be having on you. I tend to be a slightly anxious person and I’m always thinking, even worrying, about things. Not necessarily a bad way to be, but if it’s not controlled it can become a problem.

You might be asking, why is this even important and what effect will it really have on me and my body. Well as chest breathers we are not allowing our diaphragm to work, thus not allowing the lower half of our lungs to be filled with air. Which means less oxygen that is available for the body to use. When you “belly breath” and activate/contract your diaphragm muscle, it moves down and out of the way of the lower half of the lungs allowing them to fully expand and be completely filled with air. Full lungs means the body has the correct amount of oxygen it deserves. As you exhale, the diaphragm relaxes and moves back up to its starting position underneath the lungs and at the same time forces all the left over/unused air completely out of your lungs. Which then equals, clean fresh air with every breath. Chest breathers are said to only fill up 1/8th of the lungs with air where diaphragm breathers aka. full breather’s/belly breathers are said to fill almost 100%. Many studies have been conducted on this method of breathing and researchers have found it can reduce high blood pressure, stress levels, aches and pains all the while increasing overall health, sense of self, confidence, and mental clarity/productivity. There is also a spiritual benefit to breathing correctly, but I might have to do a part two to get into all of that!

The last couple months I’ve been trying some simple techniques to control my breathing and I can honestly say it makes such a difference in my mindset and overall productivity throughout the day. I know we are all crunched for time, especially in the mornings, but I would love if y’all could give just 2 minutes to this method (obviously the longer you can do it the better) but two is better than 0 and I know those 2 minutes will have such a positive impact on you!! Every morning, when you first wake up (or after your fifth snooze haha!) lay flat on your back, arms at your side in a comfortable position and hands completely open but relaxed. Now begin to focus on your breath, is your chest rising? Are your shoulders moving? Your answer should be no to both of those. Why? Because I want you to practice diaphragmatic breathing. Try expanding your stomach while keeping your chest relaxed and shoulders uninvolved. Your inhale is slow and steady and your exhale out should take twice as long as your inhale did. It’s easier to elongate your exhale by releasing the air through your mouth instead of your nose, but whatever is easier for you just as long as the exhale is twice as long as the inhale. After a couple breaths take notice; Have you clenched your hands into fists? Are your feet tense? Is your back tense? Is your mind clear of all thoughts other than your breathing? In the beginning I would find that my lower back would be slightly arched and my fingers would be in the beginning stages of forming a fist, not to mention my mind ALWAYS had a thought in it! But over time I have been able to remain completely relaxed and my mind completely blank.

But take note, I said over TIME. And when I say time I mean months. Even now there are days when I wake up and can’t make it through 4 minutes without a thousand thoughts clogging my mind and my back ridiculously tense. But I’ve learned to either put some music on (I LOVE music, so it might not work for you the way it does for me, but give it a go!) or I just stop and come back to the exercise at later time during the day….and that is completely OKAY!! However, on a good day I can wake up and before I know it 10 minutes have flown by and I was able to remain completely relaxed and literally thoughtless; not even thinking about my breathing because it’s becoming a habit instead of a thought. Good or bad attempts, I am still able to feel how much this exercise helps me and benefits my overall well being and state of mind. I’m much more focused, my body is relaxed and my productivity level is through the roof! I’ve also found myself able to use this breathing method during certain periods of the day too, but I am definitely not a pro at it…yet!! ;) Just remember there are no quick fixes and any progress, weather big or small, is still progress!! Hope y’all find this as useful as I do and until next time, dream, believe, and achieve!! XO, Juliana

Juliana Daniell is an IFBB Bikini Pro, an APS Nutrition sponsored athlete, the current Miss Supercross and TV host. With her Bachelors of Science degree in Human Nutrition Food and Exercise from Virgina Tech, her background as a NCAA Division 1 swimmer and professional cheerleader for the MLB, NHL, and NBA, and her passion for helping others become the best version's of themselves; she will take you Back to the Basics in and out of the gym!