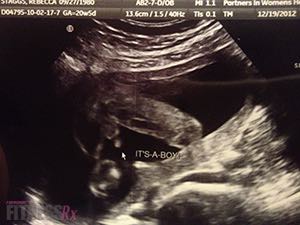 Out of all the appointments I’ve had so far, the 20-week ultrasound with my hubby was the best one yet. Currently I’m going once a month, but starting next week that bumps up to two times month because I’ll be in my third trimester. 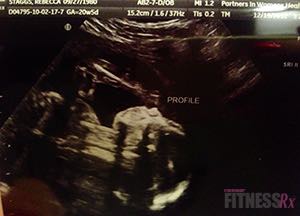 From the moment we found out I was pregnant and began talking about the future, Tim said he wanted a boy. I really didn’t care what the baby’s gender was, as long as it was healthy, but I wanted a boy for him. We talked about whether we wanted to find out the baby’s gender or not…Tim wanted to 100 percent, but I was torn. I always thought I wanted to be surprised at the birth. He somehow managed to convince me to find out, and once I agreed to find out, the ultrasound couldn’t come soon enough!

We went in mid-December, and as we watched the monitor we were able to pick out little body parts. Tiny feet, a face, rib cage, and you guessed it, genitals. Even with our unskilled eyes, before the tech could even tell us what we were having, it was obvious it was a boy! I looked over and my husband who was staring at the monitor in silence, and I said, “You got your boy!” It was a very happy moment. 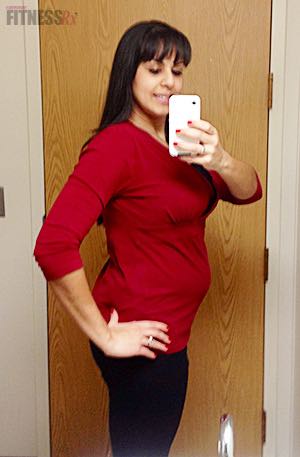 After that, we got a couple of printed pics and I put the non-gender revealing ones up on Facebook and showed my mom. One of my friends and coworkers was in cahoots with me for a gender reveal. I told her the gender of the baby, and she was to make a chocolate cake with a stripe of light blue Bavarian cream frosting inside. A week later was Christmas, and we cut the cake instead of having the traditional pumpkin pie for dessert. We had a small gathering for Christmas with my mom’s side of the family, but it was really nice because my grandparents were visiting from Florida and got to be there when we revealed the gender. My aunt and uncle were also in attendance, and my brother, who lives in Washington DC, and my cousin who lives in NYC both Skyped in for the big reveal, too. Here’s a short video on YouTube of the reveal— that’s mom cutting the cake! First-time grandma to be! I’m the one behind the camera, with the loud voice. :) http://www.youtube.com/watch?v=ZZb4Cak-8Gs

So fast forward to today— I’m finding that other than the occasional bite of tortilla chips, and errant handful of Skittles from my boss’ magically refilling Skittle machine, I don’t really want junk. I go out weekly for date night with Tim and enjoy whatever I want, and that is enough to keep me satisfied. I just don’t feel as good when I eat the junk, and I think that’s my body’s way of telling me what I really need to be doing. Nature has knack with these things. Tomorrow marks the start of my 26th week and I can’t complain one bit.

I had an appointment today with my midwife. I have gained two pounds in the last five weeks since my 20-week ultrasound, 12 pounds total since my first visit. She was pleased with that weight. Not too much, not too little. Starting at about 28 weeks, I should gain approximately a pound a week to keep up with baby growth and my own needs. Did you know the volume of blood in a woman’s body increases by about 50 percent during pregnancy? So that can count for a couple pounds ;)

Today we discussed my birth plan, and glucose tolerance testing to see if I am at risk for gestational diabetes. I’ll be going in for that next week. Many women say that is no fun, and that they don’t feel great afterward. My doc already warned me to pack some good food for after the testing, not that I need to be told to pack food— I’m always hungry these days! I’m not sure which sounds worse, fasting for 10 hours before the test, or drinking 75 grams of glucola. It’s a syrupy, sicky, sweet drink…They do a fasting blood draw an hour after you drink the glucola, and another draw at two hours. The needles won’t bother me so much as sitting and waiting around while feeling hungry :) Hopefully that will go well! I’ll let you know!

As far as my birth plan goes, I don’t want any drugs if possible, especially no opiates or mind-altering narcotics. I borrowed a book on natural birthing from a friend who is due any day now, and I think (hopefully) with some calming methods and a good grasp on what exactly needs to be done, I can do it. The more I talk to other moms, the more I am finding out many women have given birth naturally and that makes me feel good. I am going to, God willing, trust my body to do what it was designed to do— barring any emergency intervention that is needed. Some people think I am crazy, others tell me I can do it. Guess we’ll see!

Thanks for the messages I have been getting on Facebook, and all the support! Next week I’ll share my workouts with you guys, as well as what the glucose testing was like!

Till next time,
Becca