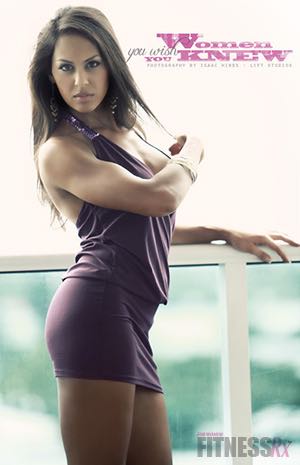 I’m Becca Staggs. I am a Certified Personal Trainer, NPC bikini competitor, IT nerd, wife and soon-to-be mother. I’m thrilled to be able to share my pregnancy story with you— the readers of FitnessRx for Women! I hope you will enjoy following along between now and the time Baby Staggs enters this world in the Spring.

A little about me: I’m 32 years old, and have been married to a hunk of a man named Tim for just over three years now. Together we own Staggs Fitness, which is a personal training and wellness coaching company. We live in Southwest Michigan, and have busy work and social lives (and two huge dogs) that keep us on our toes. While I had always known I wanted kids, we weren’t in any rush to have them— Tim less so than me. We had talked about starting a family before I was 35 (when you are considered “high risk”), so we thought we had a few years left. I have been on the pill my entire adult life, and never had any issues with it. So, as you can imagine, when I found out I was pregnant in early September, I was in shock!

I began competing in Spring 2009— my first show was a Figure show, and while I looked good, I was just too small for what they were looking for. Enter the brand new “Bikini” division. I had already submitted my application for two shows, and after doing poorly at my first show, I realized I was lacking muscle to hang with the contenders in my second show two weeks later. My husband said, “Why don’t just you try the new Bikini division and see what it’s all about?” Well, I had been off my diet for about a week at this point, but figured, what the heck— I might as well, I already paid. I grabbed a shiny Victoria’s Secret suit from my closet with little knowledge of what do even do onstage, and off I went! My how things have changed!

I placed first in that show and won the overall, and became the first nationally qualified Bikini competitor in Michigan. It was a thrilling experience, and you could say the bug bit me then. 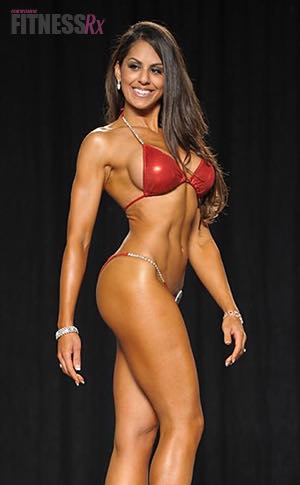 Fast forward three years, two local shows and five national shows later— placing as high as 4th at Jr. Nationals, here I am. Last year in November I competed at Nationals and realized while I have placed in the top 10 nationally three times, there is still much I would need to improve on if I ever wanted to win my class at the National level. Competing has always been about fun for me. It’s always been a hobby, with the main goal to improve each time and win my class, no matter which stage I stood on. It takes a lot of time and dedication, and side eyes from friends and family when you refuse to drink or eat junk at dinner, but you get used to it. After my last show in November, I decided I wanted to take a year or so off and really make some good improvements. I was not even sure if I was ever going to compete again, but I knew being healthy and living this lifestyle was something I would never give up. I stayed in the best shape I ever had during my off time, and was able to put on some significant muscle (well, what a Bikini competitor would consider significant, maybe :D ) and was enjoying life. My friend Dani and I had plans to fly out to Denver to see the city and to shoot with Isaac Hinds, and I was a few weeks into a mini-diet for the shoot when I found out I was pregnant.

About 10 days before I had a positive pregnancy test, I had a negative one. I KNEW something was off with my body. After years of clean eating, diet, monitoring yourself closely, you really just know these things! I wasn’t sure what was going on. I had been using the bathroom a lot more frequently, but I had also upped my water intake so I wrote it off. I had the typical pre-period signs such as sore breasts and a little water retention, so I thought my cycle was about to start. When it didn’t come like clockwork (the pill lets you know!), I thought, “Well, I’m dieting, this happens sometimes” and wrote it off, too. When it STILL didn’t come a few days later, I took a test but it was negative. Nine days later, still no period. I felt fine other than sore boobs and being a little tired/taking naps. Again, I wrote it off as PMS and diet combo. That night, Tim and I were out for our Friday night date night, and I just started bawling in the car on the way to dinner— talking about someone’s dad who had passed away… this type of outburst is not common for me at all, and he looked at me like I was off my rocker! He said, “Are you sure you’re not pregnant?” and I thought— he’s crazy. I’m on the pill, and I just took a test last week and it was negative. Yet, all through dinner I couldn’t shake the thought. I woke up the next morning early to go to the gym and before I took my pre-workout and birth control pill, something told me to take another test. I drove to the drug store, came back, took it— and within mere seconds, two pink lines. WHAT? NO WAY. SOMETHING IS WRONG HERE! Took another test right away and yep… positive!

I was in shock. How would Tim react? When did this happen? What was going to happen next? We weren’t planning on this.

After sharing the news with my hubby, who was just as shocked as me, he came over on the couch where I was crying and put his arm around me. I was relieved to have him by my side, and even though it wasn’t a planned pregnancy, I knew I was not alone in this. The following day, I scheduled a visit with my midwife. I didn’t have to switch practices because I had been seeing a midwife for the past 10 years for all my GYN stuff, because I knew that that one day when I had kids, that was route that was more my style. I love the practice I go to, and they have a great reputation. They didn’t seem too concerned to see me right away, as all was going well with me. I didn’t even have an ounce of morning sickness, lucky me!

Three and half weeks later I had my initial OB visit. They asked about the date of conception, and I had no idea! Since they wanted to be sure and get a due date nailed down, I was off to ultrasound before I knew it. There I was, 9 weeks pregnant— meaning I found out right about 5.5 weeks. I saw the baby’s heartbeat flickering, and knew at that moment that even though it wasn’t part of MY plan, it was part of a bigger plan. I was instantly in love, and seeing the heartbeat brought tears to my eyes within seconds. I was responsible for keeping that heart beating, and I knew I had to do everything right. 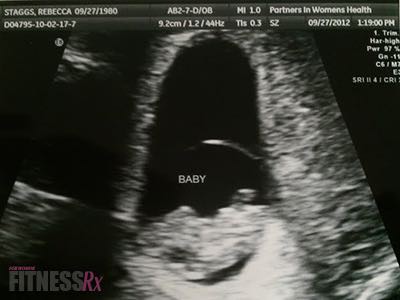 I had been leaning out nicely without cardio. I was working out regularly like I always had. So other than being a little tired and now looking back, realizing I had a meat aversion (here I thought I was just sick of chicken from dieting, LOL), I had none of the horrendous pregnancy symptoms people talk about. I was close to the end of my first trimester already and feeling very blessed. We only told a few people, and as the first trimester came to a close and Tim and I wrapped our heads around the huge change that was coming, we shared the news with everyone else. We started reading everything we could get our hands on. I wanted to know about all of it, restricted foods/supplements for pregnant women, birth plans, genetic testing, etc.

Next week I will talk a little more about how being pregnant has impacted my diet and exercise, and get you up to speed with my current state— now 23 weeks along!

Here is a picture of my little bean at the first ultrasound— 9 weeks. More to come!