It’s no secret that yoga is relaxing for both body and mind, and study after study supports that claim. Healthy individuals can use yoga to reduce stress in their daily lives, but new research indicates yoga may also improve cardiovascular health, and help curb fatigue and increase physical well-being for those undergoing cancer treatments.

So how exactly does yoga work to reduce stress? It’s simple – by increasing the release of the stress-busting hormone, cortisol. According to a York University study, yoga can reduce the physical and psychological symptoms of chronic pain in women with fibromyalgia, a condition characterized by fatigue, muscle stiffness, sleep disturbances, gastrointestinal discomfort, anxiety and depression, as well as lower-than-average cortisol levels. The participants experienced elevated levels of cortisol following a program of 75 minutes of hatha yoga twice a week for eight weeks. The lower levels of cortisol – which is released in response to stress – is what contributes to pain, fatigue, and stress sensitivity in women with fibromyalgia.

The participants completed questionnaires about their pain levels both before and after the study. After completing the program, they reported they felt less helpless, were more accepting of their condition, and were less likely to irrationally worry over current or future symptoms.

According to a report on ScienceDaily.com, the study’s lead author, Kathryn Curtis, says our cortisol levels peak about 30 to 40 minutes after we get up in the morning and decline throughout the day, and cortisol secretion is dysregulated in women with fibromyalgia. Curtis believes that hatha yoga works well for women with this condition because hatha yoga promotes physical relaxation by decreasing activity of the sympathetic nervous system, which lowers heart rate and increases breath volume, according to the ScienceDaily.com report.

The study found that breast cancer survivors’ health improved when they learned to practice Mindfulness-Based Stress Reduction (MBSR), which incorporates meditation, yoga and physical awareness. The program involves group sessions for eight to 10 weeks. During these sessions, the participants practice meditation skills, discuss how bodies respond to stress, and learn coping techniques. According to researchers, those who participated lowered their blood pressure, heart rate and respiratory rate. In addition, the participants experienced improvements in their moods.

As a result of cancer treatment, chronic fatigue is another life-altering problem experienced in about one-third of breast cancer survivors. But yoga may help curb this problem as well, according to a study conducted at the UCLA Medical Center and published in the journal Cancer.

For the study, 31 breast cancer survivors were randomly assigned to participate in either two 90-minute yoga classes twice a week for three months, or a two-hour class in post-cancer health issues once a week for three months. The women reported similar levels of fatigue on a questionnaire prior to the study. The control group taking the health classes reported no changes in their fatigue or depression levels, while the group taking yoga classes reported significantly diminished fatigue and increased vigor. In fact, the yoga class reported about a 26 percent drop in fatigue and a 55 percent increase in energy after the three-month study. They also continued to report improvements in fatigue levels three months after they stopped taking the classes. Both groups of women expected their assigned “treatment” would help them, so a placebo effect most likely cannot be attributed to the yoga group’s improvements in fatigue levels.

Another study published in the Journal of the American Academy of Nurse Practitioners by Jacquelyn Banasik, an associate professor in the College of Nursing at Washington State University, found similar results. However, those who are undergoing or have recently undergone cancer treatments should consult their physicians before beginning any type of exercise. 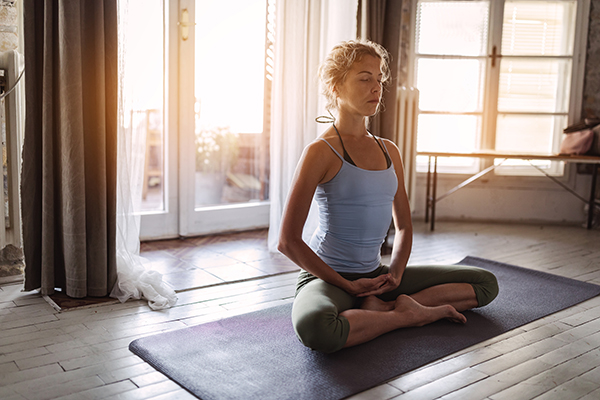 Even more good news is that short-term pranayama yoga (the science of breath control and proper breathing) and meditation is beneficial to cardiovascular functions regardless of age, gender, body mass index and whether someone is a normal healthy individual, according to a study published in Heart Views. This study involved 50 healthy subjects (24 males and 26 females) ages 20 to 60 who had never practiced yoga before but were interested in learning. Subjects who smoke and consume alcohol or drugs were excluded from participating in the study.

Pranayama, a critical component to yoga, is the art of prolongation and breath control. According to the study, the essence of the practice is slow and deep breathing, which induces a generalized decrease in the pathways regulating respiratory and cardiovascular systems. Because respiratory and cardiovascular systems have similar control mechanisms, alteration in one system will modify function in another.

According to the study, these findings are unique because similar studies have generalized the results without distinguishing the age and gender of the subjects. Few yoga studies have been conducted on individuals over 40 years old, which is when cardiovascular diseases are more prevalent. The study points out, however, that this study was done for a short term (15 days), and it is not known if the changes recorded would persist after normal respiration is resumed, or if long-term practice would lead to stable modifications of cardiovascular control.

No matter which type of yoga you decide to practice, you can be sure it will have a positive effect on both your physical and mental health. So get started today!