Long, long ago and far, far away, obesity was uncommon in the United States. Social acceptance of the condition was much lower and people who were “heavy” often offered excuses for not being able to lose weight. Among the more frequently used excuses were, “I have large bones” and, “I have a thyroid condition.” Though some people may indeed suffer from excess bone weight in conditions such as Proteus syndrome (most notably known from the case of Joseph Merrick, the subject of the movie the “Elephant Man”), this is very rare.1

On the other hand, thyroid conditions are much more common.2 However, no survey has shown that obese and overweight Americans have a poorly functioning thyroid. Seemingly, neither of these two classic excuses pardons a person for becoming unhealthily overweight. In a few years, as genetic and antibody testing becomes mainstream, future excuses may turn instead to, “I have a MC4 receptor mutation” or, “I was exposed to an adenovirus when I was young.”3,4

Certainly, future reasons for being obese, aside from the obvious environmental and behavioral causes, could be based upon scientific evidence. Even though many people will object, it is likely that data chips or bar codes will be placed in or on people to provide immediate access to medical information, citizenship or visa status, criminal record, etc. While this may improve security and provide more personalized services and care, it carries the risk of the loss of privacy. Yet, one mistake made over and over again is failing to look back to the past and learn.

Why was the thyroid so often blamed for weight gain? Did it hire a bad public relations firm? Was it covering for one of the vital organs? Perhaps it was a case of mistaken identity? Or could it be that the thyroid actually was guilty?

The rationale behind the belief is reasonable enough. After all, the thyroid plays a major role in whole-body metabolism, essentially “pacing” the rate at which calories are burned much like the pace car sets the speed when a yellow flag comes out in NASCAR.5 If the body is sluggish about burning calories, resulting in a sluggish body like Jabba the Hutt from “Star Wars”, then it is logical to assume that the metabolic rate is too slow and the thyroid is not functioning correctly.

Thyroid function is both easy and hard to measure. It is easy to measure if the only concern is how much thyroid hormone is being produced and released.6 However, it is very hard to determine how effectively the thyroid hormone is regulating function at the cellular level.7 The thyroid gland, which rests just below the Adam’s apple, sitting on both sides of the trachea (windpipe), is an endocrine organ, meaning it releases a hormone that travels throughout the body to be taken up by individual cells. It is more accurate to say the thyroid gland releases two hormones, T4 and T3. T4 is the dominant form, accounting for about 95 percent of the total hormone load released. T4 is less potent than T3 and it is more appropriate to consider it a prohormone to T3, which is the form that really “turns up the heat.” In circulation (the bloodstream), most thyroid hormone is bound to a carrier protein and is not active when so bound. Inside the cell, T4 is typically converted to T3, which then binds to a receptor and travels to the nucleus (the DNA center of the cell).8,9 The T3-receptor complex can activate or suppress specific genes in the nucleus, leading to a change in cell function. The function of interest in the realm of fat loss is the T3-associated increase in metabolic rate.

T3 increases the rate at which calories are burned through a variety of cellular mechanisms, but the two most powerful are increasing the response to adrenergic stimulation, and increasing uncoupling at the mitochondria.10,11 By making the cells more sensitive to adrenergic stimulation, fat release and oxidation (burning) is increased. Uncoupling is the process that separates ATP generation from burning fats (fatty acids) as calories. This forces the cells to burn even more fat as calories to meet energy demands.

In clinical medicine, there are a number of conditions that alter thyroid function. When the condition causes a state of low thyroid function (hypothyroidism), many changes are noted, including weight gain and fatigue. Conversely, when the thyroid is overproducing (hyperthyroidism), weight loss (including muscle loss) and an agitated state is common. Many studies have correlated the weight change (up or down) in people who suffer a thyroid condition during treatment. However, in the absence of a documented thyroid problem, there is no consensus on treating overweight or obese people with thyroid replacement/supplementation. Anecdotal reports of people reporting weight loss and subjective improvements in fatigue exist, but controlled studies are conflicting at best. Again, part of the problem is that it is easy to measure the function of the thyroid gland but difficult to measure the function of thyroid hormone in individual cells. 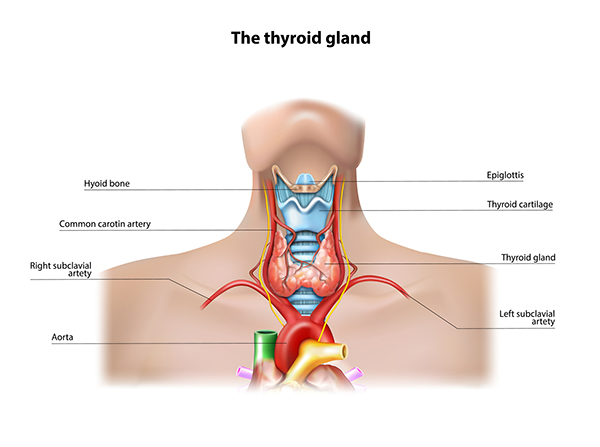 As logic would suggest, people with high TSH at the onset had a higher average bodyweight.12 Unfortunately, body composition data was not available. However, after three and a half years, the initial high TSH (low thyroid function) group did not gain more weight than people with (presumably) better thyroid status.

What does this suggest to the average person? It may be important to have hormone levels checked during a state of health (normal weight, young adulthood, disease free) so that later measures can be compared to the individual’s baseline, rather than a generic reference range. There has been a lot of dissension in academic circles as to whether a person needs to be treated if he/she has values within the normal range defined by a laboratory, be it for growth hormone, testosterone or other hormones.

Even if weight gain is not an issue of importance to an individual, there are many other functions of thyroid hormone that need to be appreciated. Another study published in the Archives of Internal Medicine reported that TSH levels within the normal range were also linearly and significantly associated with the risk of fatal coronary heart disease (heart attack).13

Every person is unique. While it is useful and necessary to establish reference ranges, and prudent not to treat people without evidence of need, these studies support the argument that a “cookie-cutter” mentality cannot be applied to many hormones. The resources and technology exist to easily measure individuals’ endocrine hormone levels during states of health, so that changes can be more relevantly analyzed during times of ill health or changes in status (aging, obesity, etc). For the person whose weight has increased over a period of years, who shows a low-normal thyroid function (higher TSH), a trial of thyroid hormone replacement may be warranted. For athletic women, measuring TSH prior to and during an intense training period may allow trainers and physicians to more readily detect signs of overtraining. Hopefully, studies such as these will prompt modern medicine to consider the concept of individualized normal ranges, rather than forcing the population into a one-size-fits-all system.

These studies provide valuable information for clinicians but should not be construed as advocating thyroid hormone indiscriminately for weight loss. Several athletes and fitness contestants, as well as everyday people, have abused thyroid hormones (Synthroid, Cytomel, levothyroxine) to lose a little weight or cut fat, only to end up dependent on the medication long-term as the thyroid failed to return to normal function after being suppressed by the drug therapy.