Oral contraceptives are the birth control method of choice for many women because of its effectiveness and convenience. Physicians have prescribed the “pill” for decades, yet, we still don’t fully understand the health consequences of its use. Many women know the pill suppresses libido (sexual desire). What they don’t fully appreciate is that the decrease in sex drive may be permanent and irreversible.

Scientists from the Departments of Endocrinology and Urology at Boston University Medical Center, led by Claudia Panzer, found that women taking oral contraceptives complained of many sexual health problems, such as decreased libido, lack of arousal, painful intercourse, inadequate lubrication and lack of interest in sex. The scientists linked these problems with depressed levels of blood androgens. They also found a marked increase in sex hormone-binding globulin (SHBG), which persisted long after the women stop taking the pill. Sex hormones, such as testosterone, circulate in the blood in a free-form state or bound to SHBG. Bound testosterone is much less biologically active (effective) than free testosterone. Higher levels of SHBG mean that there’s less biologically active free testosterone to promote sexual desire.

The study examined androgen and SHBG levels in 124 premenopausal women for 12 months. All of the women complained of having sexual problems. Subjects were subdivided into users of oral contraceptives (OCs), past users of OCs (stopped using the drug at the beginning of the study), or those who never used OCs. SHBG values in the current users were four times higher than those in the never-used group. While SHBG decreased somewhat in women who stopped using the pill (i.e., past users), a year later they were still double the values of the never-used group. The researchers concluded that using birth control pills (now or in the past) may have long-term sexual, metabolic and mental health consequences due to chronic elevations in SHBG, which reduces sex drive due to a decrease in biologically active androgen levels. They speculated that using oral contraceptives for many years might cause changes in the genes regulating SHBG production in the liver, causing permanent depression of free testosterone and sex drive. 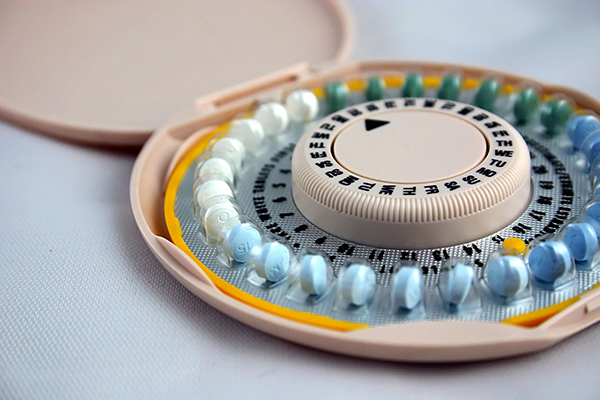 Birth Control Pills: the Good, the Bad and the Ugly

Pregnancy occurs when an egg is released by the ovaries and fertilized by a sperm cell. Birth control pills contain hormones that suppress ovulation – the release of the egg. Types of birth control pills include the combined pill, which contains estrogen and progesterone and the Minipill, which contains only progestin. Both kinds prevent ovulation, but the Minipill also thickens the mucus around the cervix, which prevents the sperm from entering the uterus.

Most women who use birth control pills have no side effects, other than suppression of sex drive. However, some women may experience bleeding between periods, weight gain, nausea, headaches, breast tenderness, moodiness and blood clots (mainly in smokers over 35 years of age). Most of these side effects disappear within a few months. Physicians often prescribe other oral contraceptives that present fewer side effects. Women usually welcome other effects of the pill, such as lighter periods, milder menstrual cramps, reduced risk of some types of cancer and softer, reduced incidence of acne.

The pill is responsible for the sexual revolution that began in the 1960s and also for the more conservative attitudes about sex held by many young people today. The pill opened the floodgate of wanton sexuality. However, women quickly found that it offered no protection against any type of sexually transmitted disease (STDs). The promise of consequence-free sex caused the sexual revolution, while the reality of STDs curbed it. Having sex with men who consistently used condoms is the only way for sexually active women to reduce the risk of getting or spreading STDs.

It’s ironic that the pill, which created a generation of sexual bacchanalians (baby boomers), would be responsible for suppressing the desire for sex. The pill reduces blood levels of testosterone and free testosterone and increases SHBG – all of which suppress sexual desire. Men have about 10 times more testosterone than women. It’s not clear whether less testosterone equals lower sexual interest. Women seem to have an exaggerated response to testosterone compared to men. But as mentioned, the pill alters one of the major factors affecting testosterone sensitivity – SHBG.

Other Causes of Decreased Sex Drive

Every woman knows that men are driven by testosterone. Women have small amounts of the hormone and it has a profound effect on their sex drives. During the reproductive years, women produce testosterone in their ovaries or make it from DHEA, which is produced in the adrenal glands. After menopause, intact ovaries continue producing testosterone. Testosterone levels drop by 50 percent in women who have had their ovaries removed. Testosterone varies with the menstrual cycle, just like estrogen. Luteinizing hormone is released mid-cycle, which triggers ovulation and a large increase in estrogen. This coincides with a spike in testosterone. This is nature’s way of coordinating peak sexual desire with ovulation, which maximizes the possibility of conception.

DHEA is produced in the adrenal glands (hormone-secreting organs lying on top of each kidney). It’s the most plentiful androgen in women and it can be broken down to testosterone and estrogen. DHEA is an extremely popular supplement with aging men and women because it’s thought to improve sex drive and sexual performance. There’s little research to support this.

The Australian study couldn’t identify any level of testosterone or DHEA that could distinguish between women with low or normal sex drives. Blood testosterone, by itself, provides little information about testosterone metabolism. Testosterone is produced in a variety of tissues, where it has biological effects that aren’t reflected by its blood level. Also, testosterone works by binding to receptors in target tissues. Differences in receptor sensitivity can create large differences in women in its effect on sex drive, body composition or muscle mass. As discussed, much of the testosterone in blood is bound to SHBG, which diminishes its biological activity. Birth control pills increase SHBG, which may reduce libido. While scientists have no simple test to identify testosterone deficiency as a cause of low sex drive, the fact remains that most women who take testosterone supplements experience an increase in sexual desire.

What Is Normal Sex Drive?

Is the loss of sexual desire the most prevalent sexual problem facing women of all ages? While loss of sexual desire is common in postmenopausal women, it affects as many as 45 percent of women under age 50. More than 40 million American women suffer from low sexual desire and satisfaction and most aren’t happy about it. Multiple studies showed a marked decrease in sexual activity with age. In fact, a study of the economics of sex and happiness conducted by researchers from the National Bureau of Economic Research in Cambridge, MA showed that 50 percent of women over 40 years of age haven’t had sex in a year. Depressed libido is a serious problem if it interferes with relationships, personal satisfaction and happiness.

Birth control pills may be part of the problem. Dr Panzer, the lead author on the study from Boston University Medical Center, said that the loss of libido from taking birth control pills might be irreversible. “It’s important that when doctors advise women to take oral contraception that potential side effects, including loss of sexual appetite and arousal, are pointed out. If, as our study suggests, the pill can cause a long-term or permanent loss of libido, that is something women need to be made aware of.”