Over-the-counter fat-reducing drugs and supplements strengthen the credibility of their claims through the use of scientific-ish reports and anatomical diagrams with bold arrows. While the science might be confusing (sometimes by design), who can say “no” to bold RED arrows? To avoid being inappropriately swayed, it is important for the consumer to understand the science well enough to discern among truth, fiction and falsehood. 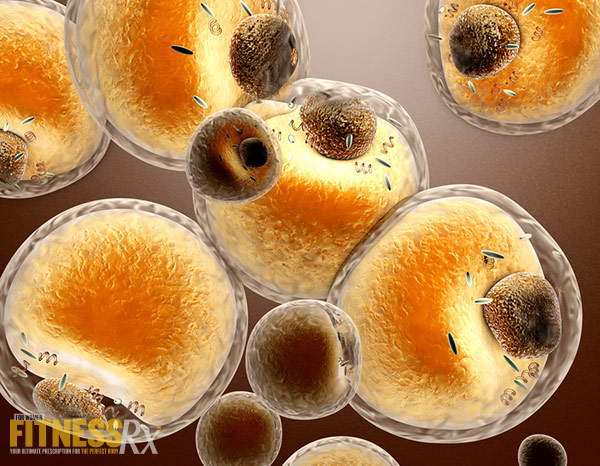 To keep things simple, fat in this article refers to the yellowish tissue that accumulates under the skin and around organs, often the result of over-eating and leading an inactive lifestyle. Each meal we consume usually contains more calories than the body can use immediately, so excess nutrients are shuttled into tissues specifically designed to store the calories for later use. Sugars and some amino acids (from protein) can be stored as long chain starch called glycogen. Most glycogen stores are in skeletal muscle and the liver. Fat and excess sugar can also be stored as, well, fat. Fat is preferentially stored in specialized tissue called adipose, which is mostly comprised of white fat cells. There are other types of fat cells— brown and beige— but they have a different function. Though most people bemoan the presence of adipose tissue, it is a vital organ, serving a variety of needs. Adipose stores energy for later use during periods of starvation or prolonged activity; prevents the deposition of fat in abnormal tissue and organs, such as arteries, intermuscular depots, or within the liver; and releases hormones and messenger signals that affect the metabolism of the entire body.1

Fat cells function best when they are not over-burdened. The long-standing belief was that we live with the fat cells we are born with. Well, that is wrong. The number of fat cells changes and can increase, but not rapidly. Instead, when conditions exist that constantly over-supply fat to the fat cells, these cells increase in size, more quickly than number. Fat cells that get overly large are called “hypertrophic” and send out signals that the body is in a toxic state of health.2 Remember, gluttony is one of the seven deadly sins; obesity is a disease state. For obese people, many of the initial metabolic benefits seen with weight loss are the result of reducing fat cell size, not just losing weight.

Thus, knowing how fat cells build their fat stores, break down stored fat, and signal to the body will help understand some of the “science” of fat loss. For fat cells to grow, there needs to be not only a supply of fat circulating in the blood (called triglycerides and lipoproteins), but also signals that activate enzymes on the fat cell membrane that break the triglycerides into glycerol and free fatty acids. Fat often predominantly travels in the blood as “lipoproteins.” Some may not be aware that fat is composed of three fatty acids attached to a glycerol. Triglycerides cannot be absorbed into the fat cell, but can be absorbed as glycerol and fatty acids, which it then reconstructs into fat (triglycerides) that are stored in a structure called a fat globule. It is basically a big Ziploc bag in the fat cell that holds an oily lard-like substance. The fat globule is inert, or inactive, which is why scientists long considered the fat cell to just to be storage tissue, not a tissue that affects the rest of the body. More on that later.

There is an enzyme released by the fat cell that will break down lipoproteins passing by, called lipoprotein lipase (LPL).3 In order for this enzyme to be active, the proper signals or conditions must be present. LPL is active in the fed state (during and after meals), during exposure to high concentrations of glucose (sugar), or under the influence of insulin. Exercise or other physical stress decrease LPL activity. Other tissues have a different response profile for LPL (e.g., exercise or fasting increases skeletal muscle LPL); this serves the needs of the cells in a condition-specific manner. When you have a full tummy, you can store calories for later; when you are physically active or hungry, the calories need to go to the metabolically active muscle to provide energy.

The end messages here are: avoid high-carbohydrate meals; try to moderate insulin; try to avoid just sitting around after a meal to stimulate blood flow and LPL in active muscle instead of fat cells. It is worth noting that many people, especially those with excess fat, are insulin resistant. This means they maintain high insulin concentrations and release more insulin following a meal than “normal” people. Often, they have hypertrophic fat cells as well. Hypertrophic fat cells will not turn on the LPL enzyme as quickly, and often “leak” free fatty acids into the bloodstream. While this may sound like fat loss, it actually ends up shuttling the fat into “ectopic” storage areas, which really messes up the metabolism. Sedentary people with substantial stores of ectopic fat develop “metabolic syndrome,” which leads to increased blood pressure, risk of type 2 diabetes, and cardiovascular disease.

Drugs and supplements that may aid by reducing fat storage would include those that inhibit starch or fat digestion in the intestinal tract, or improve insulin sensitivity. However, some result in increased fat storage, such as PPAR-gamma agonists.4 Supplement examples (with limited effect) include: orlistat (aka Alli®), white kidney bean extract, and lipoic acid.

Fat loss is also under the control of receptors and enzymes on and in the fat cell. Whereas storing fat occurs under conditions of being fed, exposed to high blood sugar, insulin and in a state of rest, the breakdown and release of stored fat from the fat cell occurs in the fasted state, in hypoglycemic (low blood sugar) state, under the influence of counter-regulatory hormones to insulin, and during activity or stress.

As the fat cell needs to break down stored triglycerides prior to shuttling the fatty acid and glycerol to the bloodstream, there are a number of enzymes involved.5 However, the signals for this process arrive via the circulation, interacting with specific receptors. Whereas fat storage responds to insulin, there are a number of hormones that oppose the actions of insulin: glucagon, cortisol, epinephrine and adrenalin, natriuretic peptide and growth hormone. The body doesn’t worry about the appearance of a six-pack, but when glucose concentrations get dangerously low (the brain is highly dependent upon glucose), these protective hormones are sent out to scavenge energy to feed the brain. Most other tissues can use fatty acids for energy, in fact some prefer burning fat over sugar (e.g., heart muscle). Thus, stored fat is released to provide for the liver, muscle, heart and other organs; this spares what glucose is available for the brain. Further, the counter-regulatory hormones also tend to break down muscular protein to release amino acids into the bloodstream. Certain amino acids can be converted into glucose, while others are converted into ketones, which can be used by many tissues.

Exercise and the Fasted State

Fasting does not need to last for days. Some are promoting alternate day fasting (or very low calorie intake) to increase the use of stored fat.7 Fasting can refer to any period long enough between meals such that the increased nutrient availability and subsequent hormonal and metabolic responses to eating subside. Most people awaken in the morning in the fasted state, having gone for eight or more hours without eating. For people who eat every few hours (common in athletes and “grazing” dieters), this is likely the only true fasting period during the day.

Some people will perform low-intensity aerobic exercise during the early morning to augment the release of fat from fat cells, and burning the newly available calories in the active muscle. It is important to avoid high-intensity or prolonged aerobic exercise in the fasted state, as this will result in undesirable muscle loss (catabolism).8 Additionally, “thermogenic” supplements may add to this fat loss by activating the rate of calorie burning in muscle and brown fat.

A compound present in olive leaves (oleuropein) is demonstrating some potential in this field, as it may increase uncoupling— a process that increase fatty acid oxidation (burning) in muscle and brown fat.

How Fat Cells Communicate with the Brain

Lastly, it is important to realize that the fat cell is not just a Ziploc bag. It communicates with the brain and other body tissues to report on energy stores and general health. When fat cells get too big, the message sent out is changed from one that promotes healthy appetite patterns, eating and body functions to a chronic disease state that results in overeating, lower metabolism (reduced total energy expenditure), hormonal dysfunction, and a state of inflammation that increases the damage due to numerous other processes in the body.9

The fat cell releases two main adipokines, or fat cell hormones, called leptin and adiponectin.10 In a healthy, normal weight person, leptin signals how much stored energy is available. It is important for the body to know that its “tanks are full” before embarking upon something metabolically demanding such as building muscle, getting pregnant or walking away from a meal. Leptin performs this function (though there are other pathways involved as well) through specific tracts and receptors in the brain. Obese people are not leptin deficient, rather leptin resistant. Similar to insulin, they are maintaining an elevated concentration of leptin in the bloodstream due to the sheer size of their fat mass. When the signal of leptin is always “on,” the body learns to ignore it. This results in near-constant hunger, slower metabolic rate (less calorie burning), and impairs fertility and other functions.

Adiponectin is a separate adipokine that actually signals for healthy changes, such as increasing insulin sensitivity. As opposed to leptin, which increases as fat mass increases, adiponectin concentrations decrease as fat cells become hypertrophic. This means that the fat cell is signaling that it is malfunctioning and it tries to divert calories away from storage, resulting in ectopic deposition. Ectopic fat is a starting point for metabolic dysfunction in the liver, muscle, arteries and other sites.

Leptin therapy has been a disappointment, in that the people needing its effects are (with rare exception) resistant rather than deficient in this hormone. One possibility that may recover some of the signaling from leptin is the administration of a secondary hormone called MSH, being developed under the name “melanotan II” and now smaller and more specific fragments of that hormone. MSH is the “tanning” hormone produced in the skin, but also active in the brain. Could an obese person benefit from safe levels of UV exposure to induce MSH production in the skin? It is possible, but likely would be limited in effect.

It would be wonderful if fat loss came in a bottle, and certainly the process can be aided with specific drugs or supplements. However, the foundation for success in losing fat mass is, as always, lifestyle modification. It will take work, but the results are always worth it.