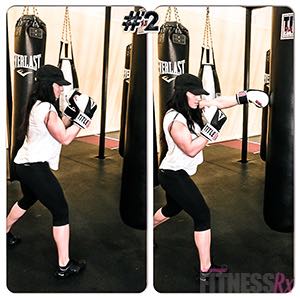 So I am going to step a little out of the norm today and talk about an awesome way to get some great arm and shoulder training— with boxing! If you have a local boxing class in your area, I would recommend taking it at least once to learn the fundamentals of boxing.

The cardio and strength benefits you get from a boxing workout are amazing. I like to add this in my routine every once in a while to switch things up a bit! I am sure a lot of women, like me, get so bored doing the same routine or just need the occasional change or addition to their physical fitness routines! I add boxing in to maintain a higher heart rate and to feel the burn in my arms and shoulders. As I am doing the drills in boxing class I wear my heart rate monitor to make sure that I can see how my heart rate is elevated and I can calculate my calories burned.

If you don’t have a boxing class available in your area, you can always use the punching bag at your local gym, grab a buddy and have them do mitt work with you, or even do some air boxing. Here is a drill that’s a great change or addition to your regular workout routine. 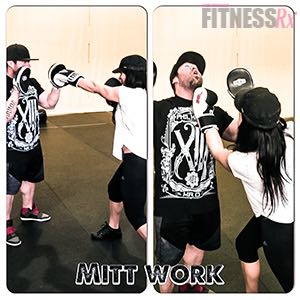 • Jump rope: 10 one-minute rounds with 30-second rest periods in between.
• Make sure you are not taking breaks for the whole minute.
• Keep a fast-paced jump.

• Drop to a push-up position, using proper form do a single push-up.
• Hop back up and do a vertical jump straight up, keeping arms above your head.
• As quickly as possible for the entire minute, repeat this cycle.

• Get in slight split stance, facing a boxing bag with one leg slightly behind the other (dominant leg in back).
• Using your front arm, throw jab at bag, keeping elbows up in guard to protect face entire round.
• As quickly as possible, maintaining proper form, throw single-arm jabs at bag for the entire minute.

• Keep a slight split stance with dominant leg slightly behind the other.
• Rotate back foot as you throw dominant arm straight out directly at bag.
• Keep rotating in the hips as you punch with elbows up, protecting the face.
• Throw a “number 2” for an entire minute as quickly as possible. 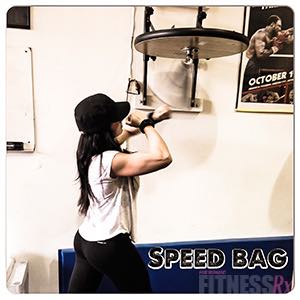 Throw 1-2 for five one-minute rounds, with 30-second rest in between

• Same stance as before.
• Rotate between throwing a jab (“1”) straight to a 2, directly at bag.
• Keep elbow up in a guard the entire round (always protecting face).
• As quickly as possible, throw your 1-2s for an entire minute, then take 30-second break.

• Have a friend grab some mitts or if you train solo do air boxing.
• Let your friend know to call out #1 or #2 or even #1-2s as you throw punches at mit.s.
• Keep proper boxing stance and gloves up to protect face

• If you have access to a speed bag, use it to finish off your workout.
• This will help with speed and timing.
• Keep elbows up to intensify workout and rotate between both hands.
• One trick to working a speed bag is timing! (Count 1, 2, 3 punch, 1, 2, 3 punch, etc.)
(Refer to picture)

Heather Dees is a Top 5 IFBB Figure International and Top 4 IFBB Figure Olympia champion. She is a Species Nutrition Elite sponsored athlete as well as TMarie Suits Sponsored Athlete. She is a Figure and Bikini Coach, Cosmetologist and Master Esthetician. For more with Heather, check out her “Training Journals” online with FitnessRx for Women.

Find more of Heather on: