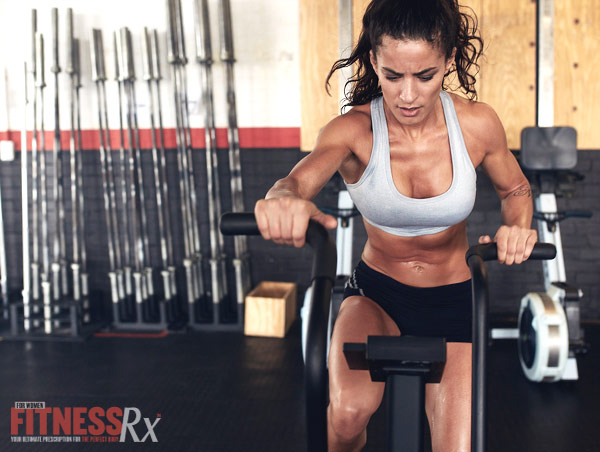 HIIT entails working at 80 to 90 percent of your maximum capacity for roughly one minute, accompanied by less intense recovery periods at 40 to 50 percent of maximum capacity, for approximately one minute. Interestingly, studies have found that subjects performing HIIT increased cardiovascular capacity4,5 and burned considerably more body fat than those who did low-intensity cardio programs6, while simultaneously supporting lean muscle growth.

Additional research has shown that HIIT also burns fat for longer periods of time, post-workout, relative to low-intensity cardio.8 Researchers believe this may be due to the ability of HIIT to uniquely increase production of PGC1-alpha 1, which stimulates mitochondrial function within the muscle cell.9,10,11 Because mitochondria are the power-producing organelles within the cell that oxidize fat, the ability of HIIT to enhance the activity of mitochondria directly increases the ability to burn fat, both during exercise and after exercise. In fact, studies have shown that high exercise intensity is required to increase caloric burn after exercise, as only high-intensity workouts increased excess post-exercise oxygen consumption (EPOC), which indirectly measures the amount of calories burned after exercise.12

The ability of HIIT to increase PGC-1 alpha levels in muscle has additional benefits outside of the muscle cell, where it directly influences adipose tissue. More specifically, it has been shown that increased levels of PGC-1 alpha within the muscle cell induces the expression of a recently identified protein called irisin, which binds to receptors on the surface of white adipose tissue (WAT).13 The binding of irisin to receptors on WAT activates a process known as thermogenesis, which boosts energy expenditure and fat loss. Consequently, exercise protocols such as HIIT— that robustly increase PGC-1 alpha levels in muscle tissue— likely prompt the expression of irisin, driving thermogenic activity in WAT for superior levels of fat loss.

In addition to low-intensity cardiovascular exercise being inferior to HIIT at burning fat, as previously mentioned, it reduces the capacity to achieve lean muscle. This occurs because low-intensity cardio consumes a great deal of energy, which tends to activate the cell’s central energy-sensing molecule, AMPK. Although activation of AMPK promotes considerable fat loss, it also prevents lean muscle growth by inactivating the enzyme mTOR, which is directly responsible for muscle protein synthesis and thus lean muscle growth. Consequently, cardiovascular exercise promotes considerable loss of bodyweight. However, a considerable portion of this weight loss has been shown to be muscle mass.1

Now, don’t get me wrong— despite all of the condemnation of low-intensity cardio in this article, I’m not suggesting that you stop performing low-intensity cardiovascular work. Low-intensity endurance exercise has very positive effects on your overall health. However, I do highly recommend replacing some, or most, of your low-intensity cardiovascular work with HIIT, especially when your primary objective is to build lean muscle mass and gain strength. On the other hand, if you’re willing to sacrifice some muscle so you can get extremely toned, then by all means crank up the low-intensity cardio and watch those pounds melt away. Just remember, some of that lost weight is going to be that hard-earned lean muscle you spent countless hours working toward in the gym— that certainly didn’t come without hard work, and won’t be easy to gain back.