Performing SMIT may even be a more effective method for improving fitness and performance. A 2013 study published in the European Journal of Sport Science looked at the endurance and sprint benefits of high-intensity and supramaximal interval training.4 The researchers found that “improvements in 3,000-m time trial performance were greater following SMIT than continuous running, and improvements in 40-m sprint and repeated sprint ability (RSA) performance were greater following SMIT than HIIT and continuous running.”4 Additionally, the higher the intensity of the exercise, the greater the metabolic impact.1

To better understand how to properly use SMIT and HIIT, you must first understand the differences between the two. HIIT involves interspersing high-intensity work intervals performed at 100 percent VO2 max with either low-intensity, active-recovery or passive recovery phases (e.g., standing or sitting fairly still). SMIT, on the other hand, involves interspersing maximal-intensity bursts of physical activity intervals performed at more than 100 percent VO2 max with the same rest interval. 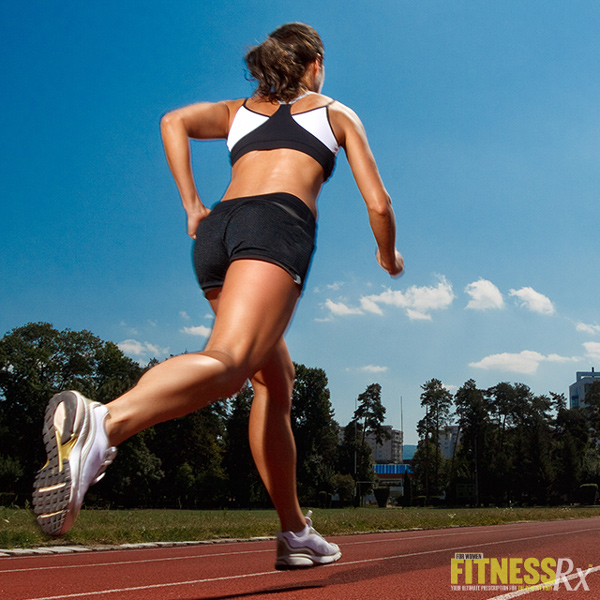 Fat loss and supramaximal interval training (HIIT) are both hot topics that are often associated with fitness and the sports training world. However, although running is a more universal exercise type than cycling, there are limited data on whether sprint interval training (repeated super-maximal intensity, short duration exercise bouts) affects body composition, as most SMIT data on body composition involves cycling exercise. Probably the most well-known study using cycling is the research that gave us the Tabata intervals, which consist of 20 seconds of supramximal intensity (as hard as you can go) exercise followed by 10 seconds of rest, repeated for eight rounds for a total of four minutes time. Contrary to popular belief, the original Tabata interval training study does not measure fat loss. In fact, there was no mention of fat loss in the paper at all.5

The female participants of this study completed six weeks of running SMIT consisting of four to six 30-second “all-out” sprints on a self-propelled treadmill separated by four minutes rest performed three times per week. The results of this study found that six weeks of the training decreased body fat mass by 8.0 percent, and reduced waist circumference by 3.5 percent, increased fat-free mass (i.e., muscle) by 1.3 percent (45.7±3.5 to 46.3±2.9 kg; P=0.05), boosted VO2 max by 8.7 percent and improved peak running speed by 4.8 percent.

As if those results aren’t impressive enough, possibly the most interesting thing about these results is that there were no differences in food intake (assessed by a three-day food records).

It’s important to note that the relationship of how many calories you consume per day to the number you burn per day is the single most important factor when it comes to determining whether you lose fat. The concept that you need to be in a caloric deficit in order to lose fat isn’t personal opinion nor is it up for debate by so-called diet gurus. This is validated in science, as research looking into the potential advantages to diets emphasizing protein, fat or carbohydrates has found that reduced-calorie diets result in clinically meaningful fat loss regardless of which macronutrients they emphasize.7

With that reality in mind, there are two ways to create a caloric deficit. You can either eat fewer calories or you can eat the same amount of calories and increase your activity level to burn more calories. In the case of the female subjects of this study, doing four to six 30-second bouts of running SMIT three times per week, which is only nine minutes of total work done per week, was enough to not only increase their fitness levels, but also metabolically demanding enough to put them in a caloric deficit.

These impressive results led the researchers of the running SMIT study to conclude that “running SMIT is a time-efficient strategy to decrease body fat while increasing aerobic capacity, peak running speed, and fat-free mass in healthy young women.”6

Since the studies mentioned here have already discussed two effective indoor training methods to use SMIT (treadmill sprints and Tabata intervals on an upright bike), here are some outdoor SMIT applications for running and cycling.

Gassers have been used by American football coaches for years in order to get their players in great condition for the upcoming season. They were originally performed by running the width (sideline to sideline) of an American football field, which is about 53 yards (49 meters), for four laps, and half gassers involved running two laps. In the context of the functional-spectrum workouts presented in this article, gassers involve running laps between two cones located 50 yards apart, since this distance makes for a nice round number and not everyone has access to an American football field.

Action: Jog up to the start cone, then run as fast as you can back and forth between the cones. Unlike in shuttle sprints, you don’t touch the cones at the turns— therefore, you stay more upright.

Use a work-to-rest ratio of 1:3 or 1:2 between rounds, depending on your fitness level. For example, using a 1:3 ratio, if it takes you one minute to complete a full round of gassers, then rest for three minutes before starting the next round. Perform two to five sets.

• You can start your gasser runs from the starting line. However, I recommend jogging up to the  starting point in order to reduce the risk of injury that can come from quick starts.
• Drive with your arms while running.

Set-up: You’ll need to use a track— the kind you’ll find at a local school.

Coaching Tips:
• Jog a few steps before you begin to run the straight portions of the track.
• Drive with your arms while running fast.

Cycling is low-impact, and therefore knee-friendly, which makes it a good substitute for people who struggle with knee issues from running. It’s also a great alternative to running for those without knee issues to use to mix up your SMIT.

As you’d expect, to perform cycling SMIT, pedal as hard and as fast and as you can for 20 to 45 seconds. Active rest for one to three minutes between intervals by pedaling at a pace that puts you around a three on a scale of one to 10, with 10 being as fast as you can move. Perform eight 20 rounds.