The beauty and serenity of rowing on flat water in the morning is indescribable, but few women have access to a lake and rowing shell. Fortunately, sophisticated rowing machines made by companies such as Concept 2, WaterRower and Tunturi simulate the rowing motion and make it possible to do this terrific whole-body exercise at home or at the health club.

Rowing combines aerobics and resistive exercise, which cuts your workout time in half. It activates 86 percent of the muscles, stresses the heart and lungs, and overloads core muscles. Rowing promotes fat loss, develops curvy and sleek muscles, and builds stable core muscles that improves appearance and prevents back pain. 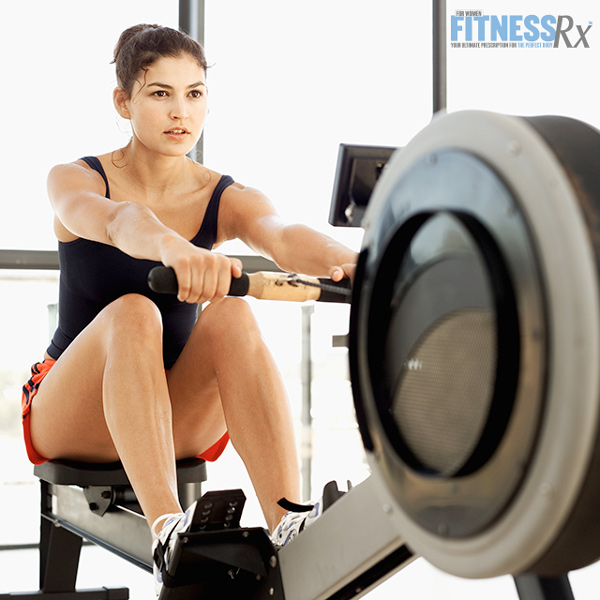 Modern rowing machines are so much like the real thing that you can almost feel the boat whisking along on the river or lake. Rowing machines cost as little as $75 to more than $2,000. Top-of-the-line rowers, such as the Concept 2 (model E), WaterRower (S1), First Degree Fitness Fluid Rower (S500), and Kettler X-Row (E3) come with LCD displays that show heart rate, stroke rate, power output and estimated caloric consumption. They are also pre-programmed with workouts for interval training, peak cardiovascular conditioning and fat burning.

Rowing machines provide resistance with hydraulic pistons, magnets, air or water. The best machines are solid, comfortable, provide a steady stroke, and allow you to maintain a neutral spine so that you don’t injure your back. Try before you buy or at least read the reviews on the Internet. Consumer reviews rated some of the units noisy, flimsy or uncomfortable.

Concept 2 is the most popular rowing machine in the world, in part because of its extensive system of web-based motivational services that include an online training diary, world rankings (by age and gender), online and live rowing competitions and distance awards such as the Million Meter Club.

Rowing is a whole-body exercise that builds cardiovascular and muscular fitness. Good rowing mechanics are essential, because if done incorrectly, rowing can cause severe overuse injuries that can damage the back, hips, knees, elbows and shoulders. Most of the power for rowing comes from the thigh and hip muscles and finishes with a pulling motion with the upper body. Maintain a neutral spine (i.e., normal curves) during the movement. Hinge at the hips and not the back during the rowing motion.

The rowing movement includes the catch, drive, finish and recovery. The catch involves sliding the seat forward on the track with arms straight as far as you can while keeping the spine neutral. The drive begins by pushing with the legs and keeping your arms straight. Finish by leaning back slightly (still maintaining a neutral spine) and pulling the handle to your abdomen. Recover by extending your arms forward, hinging forward with the hips with a neutral spine, and sliding forward again on the seat for another “catch.”

Start conservatively with 3 to 5 minutes of rowing at about 20 strokes per minute with a moderate resistance during the first few workouts. The movement is deceptively easy and invigorating. You are, however, using all the major muscle groups in the body and are probably not ready for such a punishing exercise program.

Do 5-minute intervals during the first few weeks of training: row for 5 minutes, rest 3 minutes, row 5 minutes, rest 3 minutes. Build up until you can do four to six 5-minute exercise bouts. Gradually, increase the time for each interval to 10 minutes and vary the rowing cadence from 20 to 25 strokes per minute. Your first short-term rowing goal is to complete 30 minutes of continuous rowing without stopping. Women following the Concept 2 program can record the “distance” they covered in 30 minutes and compare their performance with others.

Vary your training methods after you gain some fitness and get the hang of the technique. Alternate between interval training and over-distance training. Doing both will help you develop fitness rapidly and improve rowing efficiency.

Interval training involves a series of high-intensity exercise bouts followed by rest. The method manipulates distance, intensity, repetitions and rest. An example of an interval workout would be to row for 8 sets of 2-minute exercise bouts at 90 percent effort with 4 minutes rest between intervals.

Changing one factor affects the others. You need more rest and won’t be able to do as many repetitions or row as far when you drastically increase the intensity of each exercise bout. High-intensity exercise builds fitness best, but also increases the risk of injury and loss of motivation. Make the intervals challenging, but not so difficult that you get injured or discouraged.

Over-distance involves rowing at a comfortable pace continuously for 20 to 90 minutes. Most people enjoy rowing at about 70 percent of maximum heart rate (HRmax). A rough estimate of HRmax is to subtract your age from 220. For example, the predicted HRmax for a 20-year-old woman is 200 beats per minute (220-20 = 200). Her exercising heart rate would be 140 beats per minute (200 X 0.7 = 140). Measure your exercise heart rate with a heart rate monitor or take your pulse for 10 seconds and multiply the pulses by 6.

Rowing machines build cardiovascular and muscle fitness at the same time. They are a great way to tone up and lose fat. Why not include rowing as part of your fitness program?