Skip to content
FitnessRX for Women > Weight Loss > Cardio > A Better Way to Do Burpees
Share This!

Most trainers and fitness enthusiasts—  of all varieties, not just CrossFit athletes— perform the burpee exercise with less-than-optimal form. What do I mean by this? By going down with their feet together and back bent over, they make the movement both less safe and less metabolically demanding than it could be.

So what’s the solution? Perform your burpees less like a squat and more like a sumo deadlift. This moves the stress from the back to the hips and legs, which also enables you to work harder.

Here’s how to perform the burpee 2.0:

Set up: With your feet slightly wider than shoulder-width apart, hold your arms straight in front of your body so they’re hanging between your feet.

Action: With your knees slightly bent and your hips forward, place your hands on the ground with your wrists directly underneath your shoulder and jump your legs backward so you end up in a push-up position. Jump your feet up to the outside of your hands and return to the tall standing position to complete the rep. 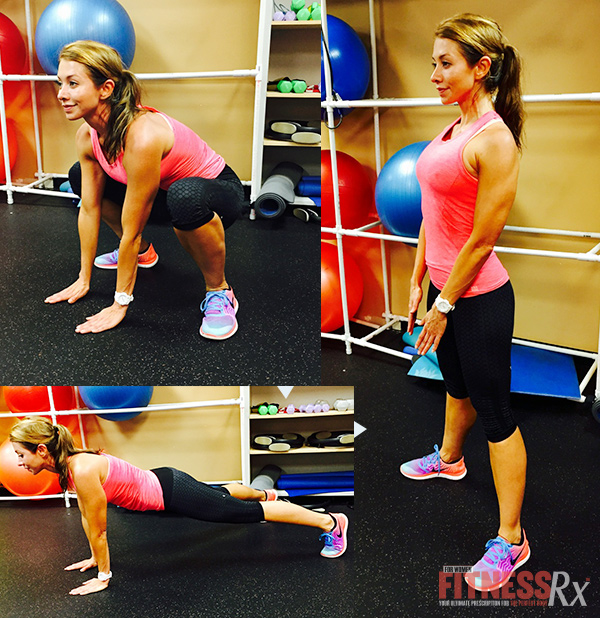 • Make sure that your body forms one straight line and that you do not allow your hips to sag toward the floor each time you’re in the push-up position.
• Each time you jump your feet up to the outside of your hands, be sure to drop your hips down into a squat-type position before you stand up tall.

Of course, you can add a push-up at the bottom of each burpee, if you’d like. You can also add a jump at the top of each burpee if you’re looking to make this exercise more dynamic, and want to further increase the metabolic demands.

Now that you understand a better way to perform the burpee, we can talk about how to use this exercise as a part of a great Tabata-inspired metabolic bodyweight sequence. But first, we must clear up some confusion about Tabata training.

The Truth About Tabata Workouts

Contrary to popular belief, the original Tabata interval training study does not measure fat loss. There was no mention of fat loss in the paper at all.1 Secondly, in the study, Tabatas were done on a bike and performed at 170 percent of VO2 max. If you don’t know, VO2 max is defined as the highest rate of oxygen consumption attainable during maximal or exhaustive exercise. As exercise intensity increases, so does oxygen consumption. That said, a point is reached where exercise intensity can continue to increase without an associated rise in oxygen consumption.

With this reality in mind, even if Tabatas are effective for fat loss and conditioning, which other scientific evidence on interval training tells us that they probably are due to their high-intensity nature,2,3,4 using resistance training or bodyweight training modalities to perform them likely won’t enable you to reach 170 percent of VO2 max on every set, if at all. So, sequences that use resistance training or bodyweight training, like the one provided in this article, are “technically” not a true Tabata. Instead, they are “Tabata-inspired” because they use the same interval framework of 20 seconds of high-intensity (as hard as you can go) exercise followed by 10 seconds of rest, repeated for eight rounds, totaling four minutes time.

Also, traditional Tabatas consist of one exercise: the bike. However, when performing a Tabata-inspired circuit using resistance training or bodyweight training, there are three reasons why better options allow you to rotate between multiple exercises:

1. When you only use one exercise such as squats for the entire Tabata, the legs gradually fatigue with each working set. This centralized leg fatigue reduces the overall intensity of the Tabata.
2. Using more than one exercise prevents centralized muscle fatigue and helps you maintain the same high level of intensity in each round.
3. Mixing in more than one exercise boosts the overall metabolic demand because it involves more muscles. Put simply, more muscles worked means greater energy demand, which in turn means faster fat loss.

Plus, doing the same exercise eight times for four minutes straight is just plain boring. The workout is already challenging, why make it monotonous, too?

You can use this Tabata-inspired circuit up to three times per week as a “finisher” after strength training.