“I am not perfect. I like people to know that I have just as many struggles as they do, and it was nice for me to experience not winning.” — Heidi Powell

Heidi Powell is a co-host of “Extreme Weight Loss” with her husband Chris, co-author of two best-selling books, author of a successful blog, mom of four kids (Matix, 11; Marley, 9; Cash, 4; Ruby, 2), NPC bikini athlete and incredibly passionate about all she is doing in life.

I had the chance to meet Heidi Powell this past year while competing at the Europa Games in Phoenix, and recently caught up with her to find out more about her. Last week in part one, Heidi shared one of her favorite “clean cheat” recipes— barbecue pizza. Here in part two, Heidi shares about her experience competing in the NPC, her training and nutrition plans (which are so simple!), how she balances everything and raises fit kids, along with her upcoming goals in her fitness and career. 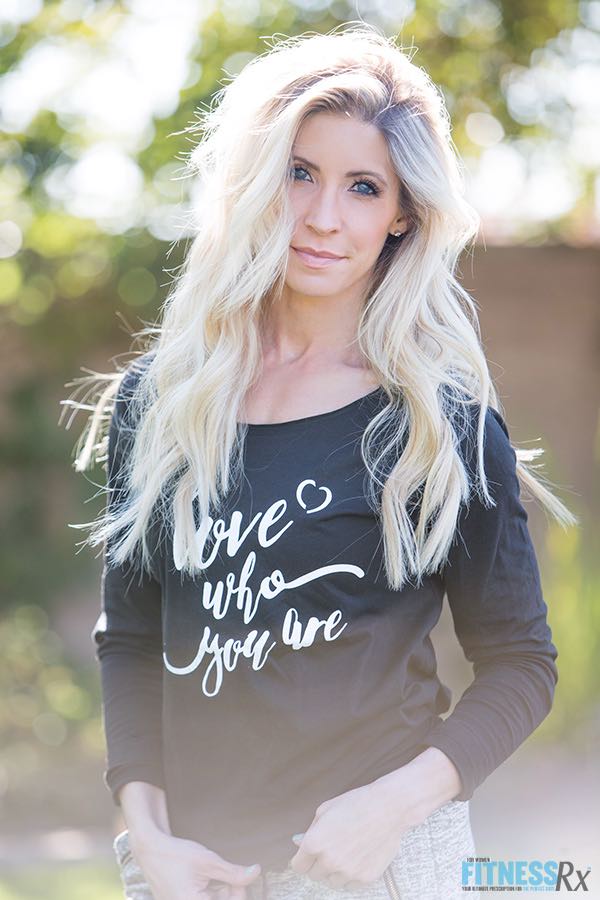 Competing in the NPC

Heidi got into competing as a result of two people on her show “Extreme Makeover” who challenged her and Chris to do a show with them, and they knew they couldn’t turn it down:

Heidi: “We [Heidi and Chris] don’t ask people to do things that we aren’t willing to do ourselves and get out of our comfort zone. At the time, I didn’t even know the difference between Bikini, Figure and Physique. This was the first time in about six years that we were forced to focus on ourselves and us being uncomfortable. It’s usually us asking them (contestants on the show) to be uncomfortable to grow, and it was, like, turning the coin a little bit.”

After that show, she decided to keep competing and got a new trainer, Damian Segovia of Pro Physique (trainer to Courtney King, Candice Lewis and other IFBB pros), to train for her second show, the Phoenix Europa in October. Heidi continues to train with him with the goal of becoming an IFBB pro— her next shows are the NPC Pittsburgh Championships in May, and NPC North American Championships in August.

Heidi: “I’ve had so many people come up to me and say, ‘It’s really interesting that you’re doing this because most people will try to compete to build a brand, and you and Chris already have a brand, so you’re kind of going backwards.’ And I don’t look at it as going backwards, I look at it as I’m never too good to keep bettering myself. I have weaknesses like everybody else, so why not get out there, make myself uncomfortable, and continue growing?”

Heidi’s diet is based on an IIFYM approach, and she gets her macros from Damian. Basically, this means she gets a certain amount of protein, carbs and fats that she eats each day, and tracks her food intake throughout the day to make sure she hits those.

Heidi: “It’s different for everybody, but this is what really works for me. I eat normal all the way through the show. I was so worried that [doing a show] would trigger me back to an eating disorder, so I am really appreciative for my coach.”

She preps her food each week, but in her own way:

Heidi: “I have to have bulk amounts of extra lean ground turkey and bulk amounts of chicken breast at all times, or else I end up not being able to grab what I need when I need it… I do everything based on the macros Damian gives me. I BUILD my day as I go, and it works really well for me. My main protein sources are: chicken, eggs, extra lean ground turkey and protein powder. I eat HUGE amounts of carbohydrates, but I keep it to rice, oats, cereal, fruit, potatoes— which I can steam up in four minutes in the microwave— so it’s all really fast for me. And, I know if I’m out and I’m running Cash to football, I know I can swing by Starbucks real quick and pair the protein source I have with two oatmeals to help me build my macros for the day.”

Heidi eats five to six times a day, and will take a scale with her if she’s traveling with the bulk proteins.

Because she has recovered from several eating disorders, Heidi has found this approach to food to be a completely different and refreshing from what she was used to:

Heidi: “I was an endurance athlete before I came to Damian and eating just 1,800-2,000 calories a day. So for him to add food and take out cardio, I had to really trust. I was so scared of what would happen to my body without the cardio. So, it’s been really eye-opening. My metabolism is faster than it’s ever been in my life.” 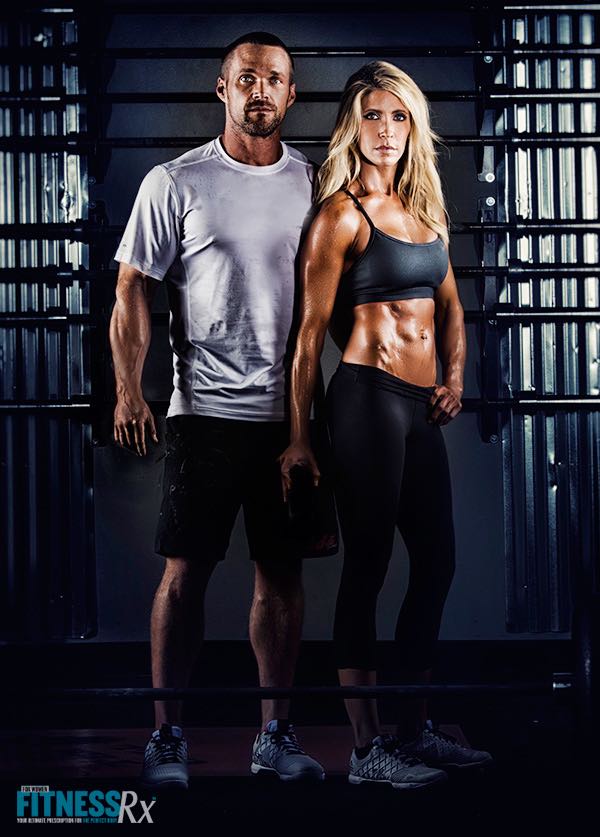 Heidi’s training this past year for her shows, and continuing into the spring, is very focused on lifting weights. She does not do any cardio. Zero. Her lifts last 60-70 minutes and she lifts six days a week. The lifting schedule she uses for her best results is: 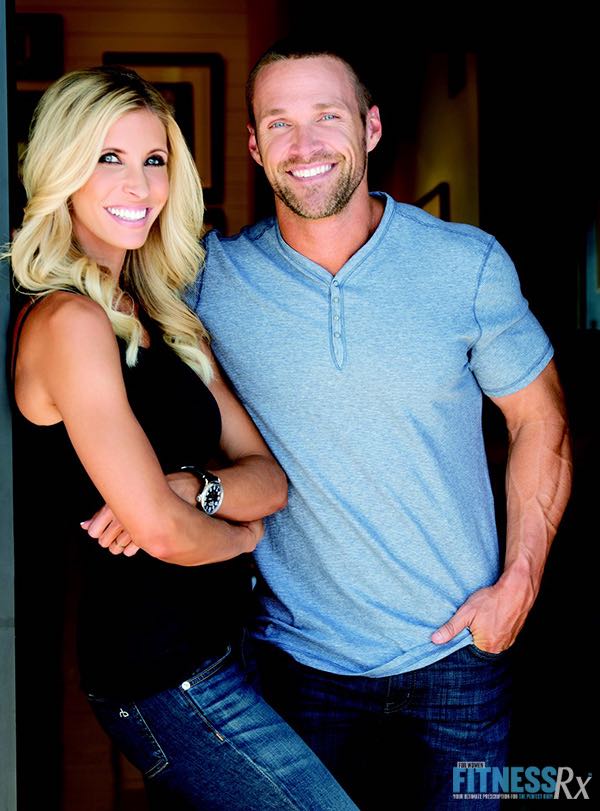 How does she fit in her workouts while managing her business and family?

Heidi: “You will never catch me lifting at the same time on any given day. Some days it’s 5:00 a.m. before the kids get up, or in the middle of the day when Ruby is sleeping, or late at night after the kids have gone to bed.”

As a competitor, the process of “prep” (getting ready for a show) is very challenging and competitors often learn things about themselves that are only revealed by preparing for a show. Heidi, though a celebrity, had some incredible insights in both her first show and second show preps and competitions:

Heidi: “Yes, you learn so much about yourself doing a show. I would say the Colorado show was a big slice of humble pie for me. I wouldn’t say I’m an egotistical person, but it was the first time I wasn’t viewed as ‘being the best.’ I like people to know that I have just as many struggles as they do, and it was nice for me to experience not winning. I trained really hard for it, and Chris had won all of the divisions he had entered, and I got third in novice and third call-outs in open. I kind of felt inadequate, and I felt like there were so many eyes on me, and I remember just crying when we got back to the hotel room because I didn’t win. It was SUCH a good lesson to me that my biggest competition is me versus me. From that moment, my goal was not about winning anymore— it was about getting better at the next show than I was at this one. That’s what I really love about this sport: It’s all about how can I make myself stronger and better, while remaining humble.”

Recovering from an Eating Disorder

Heidi: “I did not realize how far I still had to go in recovering from my eating disorder until this past June/July when I started because I weighed 103 pounds in June. That was my adult-life normal, and so to gain weight and trust and do a show at 118 pounds in August was life-changing. I never in a million years thought I would let myself be 118 pounds. I knew I wanted to add muscle mass, but I wouldn’t weigh myself. And now to step on the scale and NOT let the number control me is so free-ing for me. This is something I want to preach from the mountain tops for other women out there: You don’t need to starve yourself and don’t need to let the scale consume you. You can have the body you want while being healthy and fit— you don’t have to deprive yourself. I hope my daughter can find value in being strong and fit, not in being skinny.”

Tips for Getting Kids Active and Eating Healthy

How do you raise healthy kids?

Heidi: “It is 100 percent lead by example. Kids don’t want to do what you tell them to; they want to do what you see them do. Once a week, we do have doughnuts at our house or pizza, but it’s not like an everyday staple for them. The kids want unhealthy food, and we’re OK with that as long as they eat their ‘healthy’ proteins and carbs first. The kids do still play video games and with their iPads, but they have to earn it. So, [for example], for Cash, every morning goes out to the pool and runs eight laps, then does 20 burpees, 20 squats and 20 push-ups to earn 15 minutes on the iPad. And he loves it because he loves playing Angry Birds. And, when the timer goes off, he starts to do his circuit again for another 15 minutes.”

Heidi: “The next thing we have coming up is an app. It has weight-loss program, Men’s and Women’s Physique program (by Pro Physique), and a sports performance program (by Brute Strength). It’s a full-on training program for beginner to advanced levels, and a full nutrition program. It will be catered and customized to the individual person. We are looking to start beta-testing in May and launching it in late summer.”

Also, keep your eyes out for a show Heidi is currently working on that will follow Heidi behind-the-scenes of her training and the competitions in her journey to becoming her best and competing for an IFBB pro card.

For more on Heidi:

Rebekah is a runner & fitness model. She teaches middle school health and physical education and is also a certified ACE Health Coach. Her goal is to share ways to make the fit lifestyle simple & sustainable, and inspire all women become their best self.

Rebekah would love to hear from you! You can reach her via...