Skip to content
FitnessRX for Women > Training > Workout Tips & Advice > 5 Steps To Busting Through A Plateau
Share This! 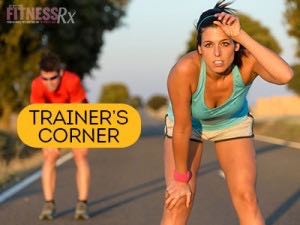 Eat less and exercise more. This doesn’t work for me anymore.

That simple two-step process works great for the beginner: The woman who has just stepped foot into the gym for the first time and needs a total diet overhaul and to get moving with some basic exercises like body weight squats, push-ups and non-impact conditioning on the Battling Ropes and Sleds. Then, we cut the calories down and take out some processed food.

Amazing. I’m the best trainer ever.

Well, not so fast. What happens when that woman is now 22% body fat, but has hit a major plateau because she continues to eat less and exercise more?

She’s training 6 days per week and eating a whopping 1200 calories each day, under 100 grams of carbs and feeling like total garbage.

That eat less and exercise more philosophy is now hurting this woman. I am speaking from experience because about 9 months ago I was that woman. I was clawing and scratching to maintain a sub-20% body fat for no reason other than because I wanted to hit that number and because I used to be 17-18%.

Not realizing that I felt like complete and utter crap during that phase. But, I had to hit that number. So I ate less (particularly carbs) and trained even harder. I was losing muscle and every week a new nagging injury would pop up.

I am no longer that woman; I’m a happier, healthier version of me. What changed?

I can’t say that I flipped a switch and became instantly better. It took a while to break the cycle. I first started to taper off my training and noticed the injuries reducing. I also increased my carb intake, which subsequently upped my calories. I then noticed my gains in the weight room increasing.

Sweet. Let’s roll with this for a while. Then I slowly stopped IF (intermittent fasting), and I felt even better. Who knew that a few hundred calories pre deadlift session would actually make a difference? (Newsflash: I knew, but I just didn’t get out of my own way enough to actually do it.)

Where is this recovering 1200 calorie, no muscle and carb fearing woman today?

I’ll take that girl over the one I was 18 months ago, any day. And today I’m here to help ease your pain and to let you know that it can be done. There are five simple steps to becoming a total badass and busting through that plateau.

1. Train Fewer Days. I recommend hitting 4 solid training sessions each week and leaving an open day for either sprints or for “playing around.” I use this play day for things like handstand push-ups, pistol squats and kettlebell work. During the 4 training sessions for the week, I’ll focus on a lower body day, an upper body push day, an upper body pull day (with deadlifts incorporated so I can hit them twice a week) and a full body or strongman-type circuit.

2. Eat More.Over the last few months, I have been increasing my carbohydrate intake. Instead of cycling carbs based on workout days and off days, I simply stayed with a set number each day. I noticed several positive changes, primarily from energy. I train in the mid-morning and I added a small snack of protein and carbs about 1 hour pre-training. I was able to lift more and sustain more volume on my hypertrophy days.

I also found that my energy was more consistent throughout the day. I no longer get a mid-day crash, even on the days that I’m at the gym early to train clients. The biggest thing for me is now I really don’t feel deprived, because I simply work any “treats” into my macronutrients for the day.

All in all, I increased my calories by 600-800 per day. You may need to up your only a few hundred calories initially. Time your carbohydrates so you take them in pre and post workout and focus on 1 gram of protein per pound of body weight.

3. Hit The Weights Harder. During my “no muscle” phase, I was doing a lot of full body circuits, which are great for fat loss. But, I had a goal of packing on some muscle and that just wasn’t happening (also because of that whole not eating enough thing). I focused my energy on those bigger lifts, three days per week and just one day that was more conditioning or metabolic in nature.

4. Get More Volume. This may sound contradictory since I just spoke about training less, but what I mean is you need to get more volume on the actual muscle group you are working. Full body circuits are great, but if you want to add more definition and shape, you have to hit the muscle group hard. Instead of glossing over with sets of push-ups and chin-ups, I separated my days into push and pull so the push day might be dumbbell bench press, push-ups, dips and then some accessory work. For me, this worked amazingly well, and I highly recommend it for women trying to look and feel badass.

5. Sleep And Recharge. I know you hear this all the time, but I can’t emphasize enough that you will not see results if you are not recovered. I was injured, tired and a total pain in the ass at all times until I got my recovery and sleep correct. The female hormones are sensitive and if our cortisol is constantly high, we cannot lose fat or build muscle. Get 8 hours of sleep each night, but also, take that 1 hour before you go to sleep to relax. Turn off the phone, social media and distractions. Instead just read or do some reflection on your day. It’ll lead to much more peaceful sleep and a relaxed mind.

So ladies, if you are like I was…under-eating, overtraining and stuck in a major plateau, you probably need to do the exact opposite of what you think. Eat more, train less and treat your body with the extra TLC that it needs to get optimal results.

Callie Durbrow is the owner of Durbrow Performance Training and the author of Strong and Sexy in 25 Minutes.