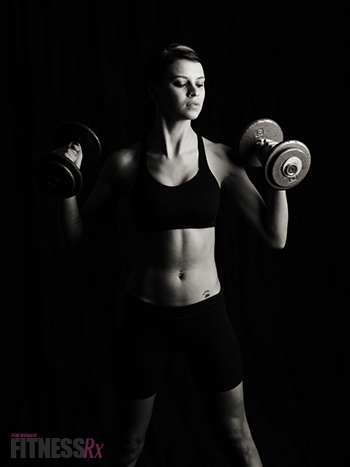 Does taking something natural to add lean mass and help you push through those HIIT sessions, or to help you lift heavier and harder, sound appealing to you? I’m talking about beta-alanine, a naturally occurring, non-essential amino acid that may just give you the edge you need to take your training and results to the next level.

This performance-enhancing nutritional supplement has gained a lot of credit in the supplement word, and recent studies are proving it to be a very promising addition to your supplement stash. The science behind it makes sense, and it works. Let’s take a closer look at this sport supplement.

The Science Behind It

Beta-alanine is found in the muscle of animal proteins. It is the “beta” form of the amino acid alanine, which muscle cells use to make carnosine. Carnosine controls the lactic acid from intense exercise. With intense exercise (muscular contraction), our bodies accumulate a large amount of hydrogen ions that cause our muscles’ pH to drop or become more acidic. When the pH level in our muscles’ drop, so does our muscular performance, and you fatigue. Carnosine helps stabilize muscular pH by absorbing hydrogen ions that are rapidly released during exercise.1 Not only does beta-alanine increase intra-muscular pH, it also acts as an antioxidant, inhibits protein glycation and because of its hydrogen ion buffering, it may augment excitation-contraction coupling, improving work output.3

Research has shown that athletes who naturally have high levels of muscle carnosine seem to be able to exercise with greater force, which can inevitably lead to muscular gains, strength and power. Beta-alanine has been clinically proven with muscle biopsies to increase carnosine levels by 42-80 percent, depending on the dosing and duration of the study.2

Why Not Just Take Carnosine?

What the Studies Are Showing

To date, many studies conclude that beta-alanine is capable of improving high-intensity anaerobic performance, boosting explosive muscular strength and power output, increasing lean muscle mass.4,7,8,9,10 Several studies have indicated that there are no important side effects related to the use of this amino acid and that beta-alanine seems to be a safe nutritional supplement.8,9

There is significant evidence that beta-alanine combined with creatine delayed the onset of muscular fatigue better than beta-alanine or creatine alone. The proposed benefit of this combination would increase work capacity and increase time to fatigue. More and more products are now including beta-alanine in their formulas, especially pre-exercise products with blends of creatine, stimulants like caffeine, and a host of other nutrients. And if you’ve ever tried Bodybuilding.com’s “Best Pre-Workout and Best Energy Supplement” (and recently very hyped supplement due to the presence of controversial DMAA) Jack3d by USP labs, you’ll know what I’m talking about. This combination gives power-packed workouts like no other. Hoffman and colleagues studied the effects of creatine (10.5 g/day) plus beta-alanine (3.2 g/day) on strength, power, body composition, and endocrine changes as collegiate American football players underwent a 10-week resistance-training program. Results demonstrated that creatine plus beta-alanine was effective at enhancing strength performance. Creatine plus beta-alanine supplementation also appeared to have a greater effect on lean tissue accruement and body fat composition than creatine alone. The players using beta-alanine also had a greater reduction in body fat than the placebo group.4

Beta-Alanine does not replace creatine, but these two supplements work differently. Weightlifting ladies should note that beta-alanine supplementation, on its own, does not improve maximal strength or aerobic capacity, but rather enhances anaerobic (HIIT or weightlifting) threshold and time to exhaustion.7 The same study as mentioned above by Hoffman shows that there was a trend toward lower fatigue rates during 60 seconds of maximal exercise; however, three weeks of beta-alanine supplementation did not result in significant improvements in fatigue rates during high-intensity anaerobic exercise.6,11 Also in a study just published (July 2012) in the Journal of Strength and Conditioning, Smith-Ryan and colleagues evaluated the effects of beta-alanine supplementation on high-intensity running performance and critical velocity and anaerobic running capacity. They concluded that there were no significant effects of supplementation on CV, ARC or high-intensity running lasting approximately 2-5 minutes, in either men or women. 6 This again indicates, like a few previous studies, that supplementation is not effective for aerobic performance.

A review of the most current literature on dosing calls for oral ingestion of beta-alanine at 4-6 grams per day, in divided doses, for improved total work completed, time to exhaustion and VO2 max. Blood levels peak approximately 30-40 minutes after ingestion and the return to baseline occurs three hours after capsule ingestion. Therefore, the recommendation for athletes is 4-6 grams daily, divided into four 800-1.6 gram doses throughout day and spaced in minimum three-hour intervals.3 There is current evidence to support a loading phase to load your muscles with beta-alanine.

Week #1 – 3g/day, every day ,*divided into three doses as discussed above.

Optimally, it is taken pre- and post-workout. You will notice results in 3-4 weeks. However, it is indicated that carnosine levels continue to increase for a minimum of 12 weeks, which is why it is recommended to stay on beta-alanine for at least three months to optimize your carnosine levels.5

There is also a new theory that 6 grams may not be enough for large athletes, due to the fact that the majority of the current research uses subjects that are between 70-80 kg. Therefore, just as some research suggests dosing creatine monohydrate based on bodyweight or lean mass, this may also be true for beta-alanine supplementation. There is some research being performed on dosing approximately 50 mg per kg bodyweight per day for 4-6 weeks. This research is promising, so watch for this in the near future.

When you take more than 750-800 mg of beta-alanine at a time, you’ll be at the threshold of noticing a tingling, pricking or numbness sensation on the skin— a condition called parenthesis. It’s similar to a niacin flush. When taking higher doses, this harmless condition usually disappears after an hour of use. Some users don’t mind the mild, tingling flush when using higher doses, and with more frequent use, the sensation tends to diminish.12 Time-released capsules may prevent this tingling from occurring.

Is Beta-Alanine For You?

Every decision we make about fitness is ultimately a health decision; how we train, what we eat, how much sleep we get or what supplements we take. If you respect your body, ultimately you want to know that what you’re consuming is safe and is going to give you desired results without causing any negative side effects. Beta-alanine supplementation is a relatively recent and growing area of research; however, the clinical data on beta-alanine thus far has been primarily positive. It carries beneficial effects with high-intensity exercise, including anaerobic sprints and resistance training, and it offers lean mass gain. If you’re involved in primarily anaerobic, high-intensity training and/or competition, then you may want to give beta-alanine supplementation a try.

12. Culbertson J, et al. Effects of Beta-Alanine on Muscle Carnosine and Exercise Performance: A Review of the Current Literature. www.mdpi.com/journal/nutrients 2010, 2, 75-98.