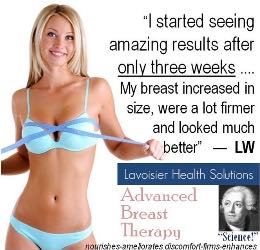 When it comes down to it, not all fat is created equal!

Sometimes breasts can be the bane of a woman’s existence. Many women (in fact, the vast majority by many major studies) experience discomfort or pain in their breasts from PMS and other hormonal-related ailments (e.g., menopause, fibroid cysts). And, for those choosing to live an active lifestyle, it is often at the expense of breast size (particularly for women losing weight!).

But what if there was a product that could both alleviate pain and increase firmness/fullness— one that didn’t require you to choose between your breasts and a better overall body fat level?

For women, the adipose tissue within the breasts plays a particularly vital role within the overall endocrine system— providing a local source of estrogen, with levels fluctuating during the monthly cycle and during menopause. Advanced Breast Therapy (ABT), from Lavoisier Health, was created to nourish this tissue in order to enable more optimal functioning. ABT is a topical application consisting of unsaturated fatty acids that penetrates epithelial barriers and stimulates changes in fatty acid metabolism in subcutaneous adipose tissue.

This results in a number of benefits for breasts— including relief of tenderness, pain, lumpiness and/or dull heaviness, and hormonal-related breast discomfort (menstrual, menopause-related). It works by delivering key fatty acids along with agents to assist in absorption locally to subcutaneous tissue, allowing for more efficient nourishment and conversion into critical metabolites.

Not only is ABT safe, effective, and easy to use, but the added bonus is that it contains all natural ingredients. (Additionally, it is possible that ABT may cause a reduction in local saturated fatty acids and increase local levels of unsaturated fatty acids— which may reduce overall cancer risk.)

The initial in-house study focused had two arms: one for the study of swelling and pain, and the other for treatment of fibroid cysts.

FYI— a friend of one of the publishers was suffering from breast discomfort and ABT has proven to be very helpful! “I had suffered from monthly breast tenderness. And to be honest I was dreading taking anti-inflammatories each month for the pain,” said the publisher’s friend. “This cream did wonders for me. Not only do they feel firm, but they feel great!”

Besides the remarkable results for relief from these conditions, some of the women reported increases in firmness, volume and bra size!

As you might expect, the majority of ABT users are seeking cosmetic benefits (firmness and fullness, rejuvenation/lifting— especially after breast feeding— increased symmetry, and keeping fullness/size while losing weight) and the website is filled with testimonials on their experiences. (ABT may also be useful for women who have breast implants— to help with increased sensitivity around the cycle as well as promote better adipose tissue distribution.)

And of course there are the users who rely on ABT to manage their breast discomfort (presumably they don’t complain about firming and enhancing effects!)

LHS offers ABT with a Money-Back Guarantee of 90 days, so trying it is essentially risk-free.

ABT is a truly exciting product! For more information and to order Advanced Breast Therapy, visit www.LavoisierHealth.com.