Skip to content
FitnessRX for Women > Nutrition > Healthy Eating Tips > How Much Protein Do You Really Need?
Share This! 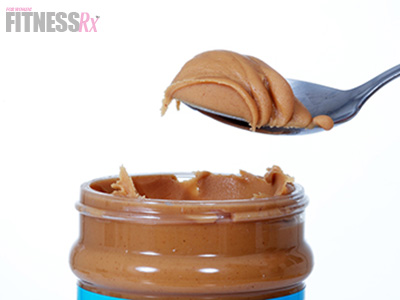 Diet fads are often like old boyfriends: They show up again and again. And sometimes the one you thought was a dud turns out to be your stud. The low-carbohydrate/high-protein diet fad first made popular in the early 1970s returned in full force in the late 1990s. After dismissing high-protein diets as ineffective, the scientific community has recently done a number of interesting research studies that shed light on the reasons why so many people find success following a high-protein weight loss strategy. And on how much protein you really need to eat when you diet.

Needs When Calories are Low
Unique among the macronutrients, protein complexes contain nitrogen. It’s the nitrogen component of amino acid molecules that allows for the building of new proteins, the manufacture of enzymes and hormones, and the growth and repair of tissues. Like carbohydrate and fat, protein can also be used as energy. But, before it can be used as energy, the nitrogen component of the amino acid molecule is removed and eliminated from the body as a waste product.

During a weight loss diet when calories are restricted, the body will preferentially use protein from the diet as energy to meet the body’s energy demands not met by dietary carbohydrate and fat. This leaves a reduced amount of protein available for the physiological functions that only protein can perform. This effect is especially pronounced in low-carbohydrate diets. In order to provide adequate amounts of protein for all its important functions, more protein is needed in the diet.

How much more? That depends on the source of the calorie deficit and the diet plan that you’re following. If you don’t exercise and you are restricting your calories to achieve weight loss, the amount of protein you need to reach protein balance is about 60 percent more than what is needed by someone not trying to lose weight. A study conducted in Japan in 1987 estimated that while on an energy-restricted diet, 1.26 grams of protein per kilogram of body weight per day (about 0.6 grams/pound/day) was needed to achieve protein balance.1

Moderate exercise enhances the efficiency of protein utilization. You get more work out of each gram of protein when you exercise at about 40 to 50 percent of your maximal work capacity, even while dieting. If your weight loss strategy is to increase the calories you burn through moderate exercise, rather than to decrease the number of calories you eat from food, you might not need much more protein.2
But exercise at higher intensities does not enhance protein utilization. In fact, exercise at 65 percent or more of your maximal work capacity while dieting may decrease protein efficiency, greatly increasing protein needs. In this case, protein needs may be as high as two grams of protein per kilogram body weight per day (about one gram/pound/day), or higher.3

The amount of carbohydrate in your diet also affects how much protein you need while dieting. Carbohydrate spares body protein. With enough carbohydrate around to burn as energy, less protein is lost from body tissues such as muscles and organs, or used as fuel, and more is available for its protein-specific functions.

Finally, during any weight loss diet there is always some muscle lost along with the fat. This lowers metabolic rate and the amount of calories you burn. But, during a higher-protein diet there is improved protein balance and reduced loss of muscle mass compared with a lower-protein/high-carbohydrate diet. This keeps the metabolic rate higher and makes weight loss easier.6 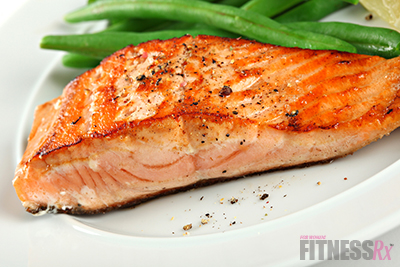 Protein Needs: Promoting Weight Loss
Aside from your body’s increased needs for protein because you are dieting, protein has some special attributes that will enhance your dieting regime. The most exciting research spawned from the high protein diet controversy has focused on the thermogenic (fat-burning) effect of high-protein/low-fat diets. Diet studies have suggested that when compared to high-carbohydrate/low-fat diets, high-protein/low-fat diets promote greater weight loss. But the mechanism explaining this weight loss was unclear.

Dr. Johnston speculates that if this energy differential actually lasted for the two to three hours after each meal (since each test point was 2.5 hours after each meal), the added thermogenic effect of the high-protein diet may have been as high as 90 calories. The high-protein diet contained two grams of protein per kilogram body weight per day (about one gram protein/pound/day).8
Other studies have corroborated these results and have shown that there is an insignificant difference in thermic effect when a high-protein/moderate-carbohydrate meal is eaten versus a high- protein/low carbohydrate meal. Protein appears to enhance the post-meal energy production and fat is the main factor in diminishing post-meal energy production.9-11

Associated with the thermogenic effect of protein is an increased sense of satiety (fullness). Women placed on high- protein/moderate-carbohydrate meals have a greater sensation of fullness during meals that lasts for longer periods of time between meals compared with high-fat meals. The difference is associated with the thermic effect of the meal. This means that by following a high-protein/moderate-carbohydrate diet you will feel more satisfied and have greater control over what and how much you eat.10,11

To capitalize on the thermogenic effect of high-protein meals, protein should be consumed in frequent meals and snacks throughout the day. This allows for the most efficient absorption and utilization of protein, as well as helping to maintain higher levels of energy production to promote weight loss.12

There may also be better food sources of protein that further promote weight loss. Leptin is the circulating body protein that is associated with control of body fat stores through regulating food intake and body energy expenditure. Several studies indicate that fish oil enhances the efficiency of leptin and influences its levels in the body.13-15 If these results are accurate, then incorporating a daily meal of fatty fish like salmon, halibut or shellfish into a weight loss diet may decrease fat cell size and enhance fat loss.

Putting it All Together 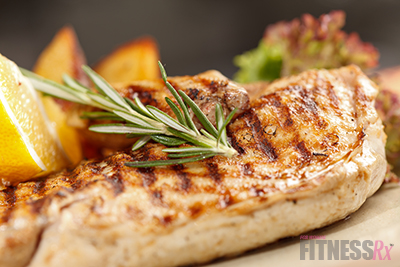 It is clear that there are sound scientific reasons to use a high-protein diet when you want to lose weight. Based on the science, an active woman’s diet should be made up of two grams of protein per kilogram body weight per day (about one gram per pound per day). That means if you weigh 130 pounds, you should be eating about 130 grams of protein each day. If you are a vegetarian, add another 10 percent to your total. Spread out your protein foods into five or six meals and snacks. Include a moderate amount of carbohydrate in your diet so you get the best use of your protein and can still fuel your exercise. And try to include at least five fish meals a week.

Before you know it, you’ll be dating that old boyfriend again (if you want to)!

Susan M. Kleiner, PhD, RD, is the author of Power Eating (2001, Human Kinetics) and has consulted with professional teams and elite athletes in all sports. Dr. Kleiner can be reached at www.powereating.com.