With the changing seasons come extra layers of clothes, holidays and ample food—things that can cause you to fall off your normal diet and even reduce workouts! But just because the bikini season is over, doesn’t mean that you need to give into temptation or give up on your goals. There are lots of great fall foods that not only taste great, but offer up some amazing health and surprising fat loss benefits too! And what’s even better, they can fit into your regular diet plan! Try adding these six foods to your fall menu: 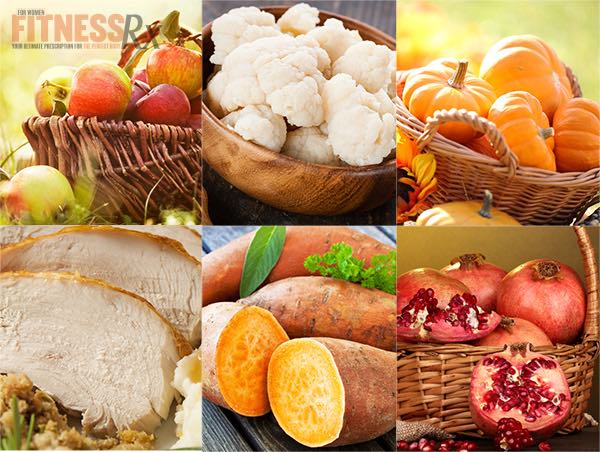 Apples are a low glycemic fruit, even though they do provide a source of natural sugars in the form of fructose. This fruit is slow digesting due to its high fiber content from pectin, which has been shown to decrease the digestion of consumed fats by the body. Apples also provide a source of polyphenols. Research showed that obese subjects who supplemented with 600 mg of apple polyphenols everyday for 12-weeks lost significantly more abdominal fat and bodyweight compared to subjects taking a placebo. One large apple provides approximately 200 mg of polyphenols, approximately 30 g of slow-digesting carbs and 5 g of fiber.

Cauliflower is a cruciferous vegetable that is low in calories, providing just 30 calories per 1 cup serving. It’s also full of fiber and a good source of potassium and vitamin C. Best of all, because of its bland and creamy texture, it can function as a replacement for the potato in mashed potatoes! You can have low carb cauliflower mash instead. Also, you can try making Jaime Baird’s tasty Cauliflower Popcorn.

Pumpkin is probably one of the most popular fall foods. Pumpkin is extremely versatile; it can be boiled, baked, steamed or roasted. It can be eaten mashed or pureed for soup. Research has also shown that the phytochemicals in pumpkin paste, including trigonelline, may help lower blood glucose levels and have a positive impact on insulin, as found in an animal model. Trigonelline is the active component of fenugreek, which has been shown in numerous studies to work effectively as a blood glucose-lowering agent and as an insulin mimicker. Controlling insulin and lowering blood glucose are keys for fat loss.

Turkey breast is high in protein, very low in fat and a great source of B vitamins and selenium. Turkey also provides plenty of the feel good endorphin tryptophan, which promotes the release and production of serotonin in the brain. Serotonin can help promote relaxation, but it can also suppress hunger and appetite. Just 3 oz of turkey provides 25 g of protein.

Sweet Potatoes are probably already part of your diet, and for good reason. They are full of fiber, have a low glycemic index and can help to stabilize blood sugar between meals. They can be baked, mashed or pureed and served with pretty much any protein as a side dish. One medium sweet potato provides 27 g of complex carbohydrates and 4 g of fiber!

Pomegranate provides a high level of antioxidants, tannins, anthocyanins, polyphenols and flavonoids, which have been shown to have an effect on fat metabolism, reduce glucose in the blood and can have a positive impact on insulin resistance. This fall fruit has also been shown to have a cholesterol lowering effect. Pomegranate seeds make a great addition to a salad, while a shot of pomegranate juice can provide added benefit to a protein smoothie!