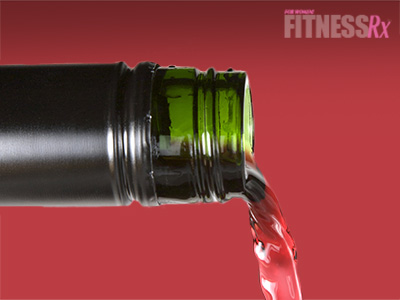 The workday’s over; you’ve got marinated shish-kebabs on the grill with tomatoes and zucchini, and the salad is tossed with olive oil and lemon. There’s fresh sliced fruit for dessert. You’ve promised yourself that this time, you’ll stick to a fitness and healthy eating lifestyle; the job’s been so stressful lately— and you don’t even want to think about the economy! The exercise you’ve been doing has helped you work off some of that stress— not to mention, shed a few pounds. But you know there is more you could be doing; and you’re right— there is. You could tip the bottle, and knock back a few.

No, I’m not telling you to go get drunk. What I amsuggesting is that you enjoy a glass of red wine with your meal tonight— if you’re a woman— and perhaps a glass and a half, if you’re a man. Because science has discovered that red wine is good for your heart. And your arteries. And cholesterol management. In fact, studies are showing so many good things about that glass of Merlot, that you may just run right out to the wine store after reading this!

There are substances found in red wine called antioxidants that may help the prevention of heart disease, by increasing levels of ‘good’ cholesterol and protecting against artery damage. The studies supporting red wine suggest antioxidants called polyphenols help protect the lining of blood vessels in your heart. These antioxidants come in two main forms: flavonoids and nonflavonoids.

Flavonoids. These antioxidants are found in a variety of foods, including oranges, grape juice, apples, onions, tea and cocoa. Other types of alcohol, such as white wine and beer, contain small amounts, too, but red wine has higher levels.

Nonflavonoids. These antioxidants found in red wine have recently been of particular interest because they appear to help prevent arteries from becoming clogged with fatty blockages. Resveratrol is the nonflavonoid— and incidentally, the chemical that gives red wine its color— that’s received the most attention from researchers. It just might be the key ingredient in red wine that helps prevent damage to blood vessels, reducing ‘bad’ cholesterol and preventing blood clots, and might also help protect from obesity and diabetes— both strong risk factors for heart disease. Some research shows that resveratrol could be linked to a reduced risk of inflammation and blood clotting, both of which can lead to heart disease.1

David Sinclair, Ph.D., the Harvard Medical School biologist who pioneered much of the research on resveratrol, was invited to appear last year on a Barbara Walter’s special on longevity. In the segment on resveratrol, Walters klinked glasses with Sinclair, as they discussed the health claims for resveratrol: it may prevent aged-related diseases like heart disease, diabetes, arthritis, and cancer. It may give you more endurance, more strength, smoother skin and it may keep your mind and memory sharp— it may even add a decade or more to your life!2Well, cheers to that!  But can these claims be backed up?

An important study was done at the University of Wisconsin involving Rhesus monkeys— a genetic cousin of humans— on calorie-restricted diets; the goal was to prove that caloric restriction slows the aging process. Scientists feel this study is a significant advance in a story that began in 1935, when researchers discovered that a nutritious, calorie-restricted diet served as a Fountain of Youth for rodents. That finding grew into a body of research revealing the beneficial effects of calorie restriction in other species, and prompted a search for drugs that would exploit the same biological pathways, without requiring people to go on drastic diets.

After two decades, five monkeys on a restricted diet had died of age-related causes such as cardiovascular disease or cancer, compared with 14 monkeys on a normal diet. The monkeys on the restricted diet were healthier overall, with no diabetes, and fewer cases of cancer or cardiovascular disease. The monkeys on the normal diet also looked visibly older— their eyes sunken, coats thinner and posture cramped— than their dieting counterparts, according to Ricki J. Colman, lead author of the paper and a scientist at the Wisconsin National Primate Research Center.

What has this got to do with wine, and resveratrol? Well, David Sinclair discovered that resveratrol could mimic the effects of calorie restriction in yeast and fruit flies— which, incidentally, is what led to out-of-control sales of over-the-counter resveratrol supplements. As a result of the above study, scientists feel that caloric restriction does indeed ensure longevity— and it looks like resveratrol just might be a key component in this quest.3

There is a YouTube segment called DNA Defender; in it, Barbara Walters and David Sinclair look at resveratrol under a microscope and discuss its age-defying properties. A bottle of Glaxo-SmithKline Sirtris, a resveratrol-based pharmaceutical, flashes on the screen. SIRT1, the first human sirtuin, was the first in a family of enzymes to be discovered. (A sirtuin is an enzyme associated with the aging process; seven have been found so far.) The discovery of SIRT1 resulted from research into the health benefits and life extension seen in multiple species on calorie-restricted diets. Rats, mice and dogs on calorie-restricted diets live longer. Sirtris’ goal is to mimic the beneficial effects of calorie restriction by developing small-molecule SIRT1 activators.4

Dr. Ehmet Oz chatted with both Diane Sawyer and Oprah about resveratrol, pointing out that resveratrol accelerates body processes that defy aging. In his age-defying checklist, red wine tops the list, along with other antioxidant fruits, green and white tea, herbs such as rosemary for clear thinking and memory, omega-3s and cardio and strength training.5

Dr. Oz, author of YOU: Staying Young: The Owner’s Manual for Extending Your Warranty, is convinced that resveratrol works. Harvard scientists put a group of mice and fed them junk food— 60 percent of it was fat. The mice became overweight and developed many health problems. Another group of mice were put on the same diet, but took resveratrol. They became overweight too— but they were healthier, prettier, lived 15-30 percent longer and had a lot more energy; they were able to outrun the other mice easily. Group 1 could only run for 1 mile— but Group 2, taking resveratrol, was able to run for 2 miles! Resveratrol increases your blood flow, hence your muscles have a lot more energy.6

It’s all still in the controversial stage, although the news is that most trials have shown that resveratrol is safe for humans— but there are more studies to come.7

Oh, and by the way: a drink is defined as 12 ounces (355 milliliters, or mL) of beer, 5 ounces (148 mL) of wine, or 1.5 ounces (44 mL) of 80-proof distilled spirits. The limit for men is higher, because men generally weigh more and have more of an enzyme that metabolizes alcohol than women do.1 Sorry ladies… sip slowly….