Skip to content
FitnessRX for Women > Life & Health > Women's Health > Burn Fat and Enhance Recovery with the Sauna
Share This!

Saunas have traditionally been used for relaxation, especially after an intense workout. However, more recently, saunas are being used as a performance-enhancing technique in addition to their use as a post-workout muscle-relaxing method. This is because increasing your core temperature for short periods of time in a sauna apparently offers significant benefits, including increased muscular endurance, greater growth hormone release and superior lean muscle growth. 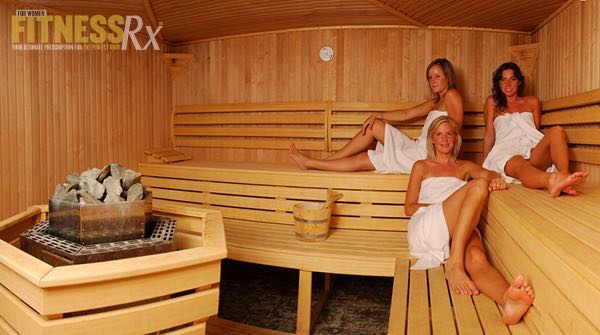 In order to see whether sauna use improved muscular endurance, a study by Scoon et al.3 looked at the effects of sauna use after exercise in a group of distance runners. The runners completed three weeks of training with and without post-workout sauna bathing, then had their endurance tested with a 15-minute treadmill run to exhaustion. The results showed that sauna-bathing increased run time to exhaustion by 32 percent. In addition, red blood cell volumes increased by 7.1 percent after sauna use relative to the control where the changes in red blood cell volume correlated with the increase in exercise endurance. The authors of this study concluded that post-exercise sauna bathing produced a considerable improvement in muscular endurance that was likely caused by increasing red blood cell levels.

The sauna can be used to enhance lean muscle growth and fat loss by increasing GH release, as several studies have clearly shown that sauna use elevates GH levels. In fact, these studies show that increasing sauna time or sauna temperature correspondingly increases the amount of GH released. The first study involved two 20-minute sauna sessions at 176 degrees Fahrenheit separated by a 30-minute cool down, and resulted in a twofold increase in GH levels.1,6 While, in a second study, two 15-minute sauna sessions at a higher temperature of 212 degrees Fahrenheit, also separated by a 30-minute cool down period, generated a larger increase in GH of approximately fivefold.1,6 Finally, a third study involving the longest time exposure of two one-hour sauna sessions at 176 degrees Fahrenheit increased growth hormone the most with a 16-fold increase in GH.7 Interestingly, another study also showed that when sauna use and exercise are combined, they synergistically increased GH,8 suggesting that the sauna use after exercise is the most effective way to produce a more robust release of GH for elevated lean muscle growth.

The ability of sauna use to improve insulin sensitivity represents another way that the sauna likely promotes lean muscle growth, as greater insulin sensitivity should support a more vigorous anabolic response to insulin release, ultimately increasing muscle hypertrophy. This effect was shown in a study by Kokura et al.,12 where they found that 30 minutes of sauna, three times per week, resulted in a considerable decrease in circulating insulin levels in insulin-resistant mice along with a reduction in blood sugar, indicating that lower amounts of insulin were actually having a greater response in the body. Of course, this means that normal insulin levels, found in non-diabetic mice or humans, would have an even greater anabolic response after sauna use based on the increase in insulin sensitivity, which would bolster greater amounts of lean muscle growth.

In response to the heat from a sauna, the heat shock protein HSP90 is produced where it apparently prevents the degradation of a key enzyme involved in the production of the cofactor BH4. The resulting increase in BH4 should increase the production of the potent vasodilator nitric oxide (NO), as BH4 is the cofactor for the enzyme family that catalyzes the production of NO. All things considered, greater vasodilation stimulated by the increased amount of NO would result in improved circulation to working muscles that would bring in more essential nutrients and oxygen while simultaneously removing metabolic waste, ultimately improving muscular function and exercise endurance.