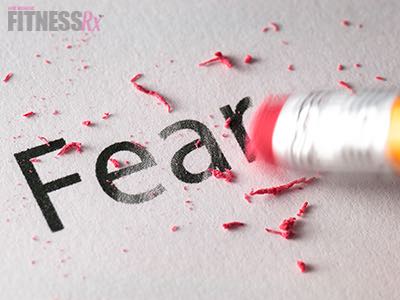 Editor’s Note: This is a beautiful post from the Muscular Development Online Editor-in-Chief Adina Zanolli. Adina has overcome many challenges in her life, including losing over 100 pounds. Adina’s relentless optimism and vibrant spirit have been the fuel to help her power through life’s obstacles. In this post, she shares some of her wisdom on living FEARLESS.

When I was nine, my father chose to leave our family, and I never saw him again. Thirty years would pass before I would find out he had died, denying he had children on his very deathbed. While this may sound sad, it is my normal.

Why can I do that? Because when my father left, he left an unintentional gift: the gift of self-esteem. Clearly, my esteem did not come from him. I had to earn it. And like with anything earned, and not given, I hold it dear.

YOU ARE BIGGER THAN YOUR CIRCUMSTANCES

There comes a time when you have to decide that that you are bigger than your circumstances, bigger than the pain, and bigger than what could hold you down if you allow it.

How do you do this?

You learn to look for the unintentional gifts. Learn to recognize that some things that seem 100% negative can be a positive if you allow them. For me, that gift was being freed from the fear of rejection.

You see, I was shy in high school. While I spoke to my friends with ease, I could not imagine one day being comfortable speaking in front of larger numbers, or keeping a blog that was read almost a million times. I wouldn’t even keep a diary back in the day for fear someone would find it and think my inner most secrets were stupid.

Not long after high school, I found it became easy to speak in front of larger and larger groups. While I watched people I had known for years grow shyer as we grew, I went to polar opposite. I thought everyone needed to know me and what I had to say!

Why? Because I had already faced rejection head on and emerged victorious. So many people are afraid to say what they really feel, because they fear someone won’t like them or what they have to say.

How did I get here? I had to actively seek the good. I had to recognize that what was meant to cause pain and suffering in my life could become the very armor I put on to shield me from anything else that came my way.

And once I learned to recognize the good that came with the bad, my life completely changed. Can you imagine living a life free from the fear of rejection? I had to learn that I own my self-esteem. I don’t have to allow in anything that will chip it, crack it, or even leave a small dent.

No one looks back and wishes they had spent more time being sad over the bad things that came their way. Train yourself to look for the unintentional gifts left behind when your life doesn’t turn out exactly as your planned. They are there….and there are many.